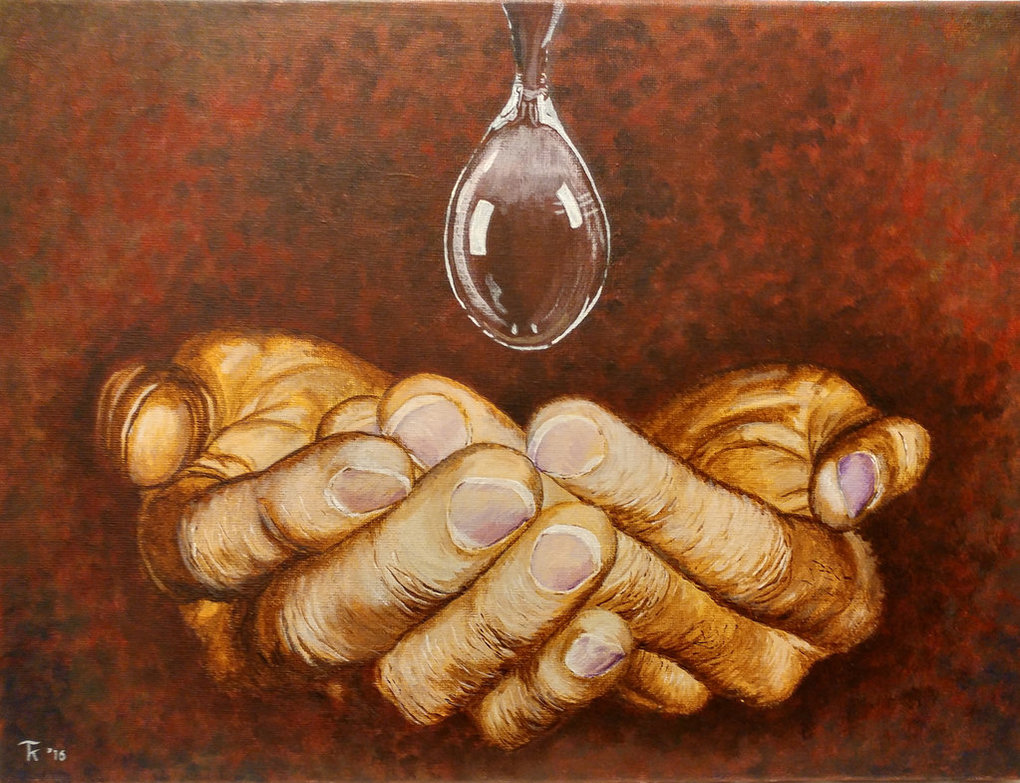 A conference – but no ordinary one

About water – but with the focus on water justice

Faith-based – but with knowledge and understanding drawn from science

Christian – but open to people of all faiths

International – but with local partners and issues*

Not only talking – but showing through actions (delicious, nutritious food was provided with a relatively light water footprint since it was all plant-based – no animal products)

An event – but part of a process to build a JustWater movement (see www.justwater2017.org)

“We live in a VUCA world.  Yes, VUCA: a world of Volatility, Uncertainty, Complexity and Ambiguity.  And nothing is more VUCA than the issue of water justice,” said Archbishop Makgoba in his address to the Water Justice conference.  From a secular scientific point of view, the Water Justice Conference at St George’s Cathedral might have covered mainly ‘old news’.  For the Church and other faith communities, however, the conference was a Vuka moment – a great wake-up call!

Many critical issues were touched on and the important key messages that came out were:

“Water justice is about sharing.  …  Share! That is water justice. Share your glass of water … and you will be amazed … there is more than what we needed of water – if only we learn to be fair, to do justice.”

The opening sermon from Archbishop Halapua addressed how imperative it is that access to water for drinking and sanitation in our water scarce context is equitable – that it is just. Only 2.15% of the Earth’s water is freshwater and South Africa is ranked 30th driest country in the world. Archbishop Halapua concluded with the following words: “Where is water justice? You gaze at me.  I look at your hearts. [Water justice] is there!” 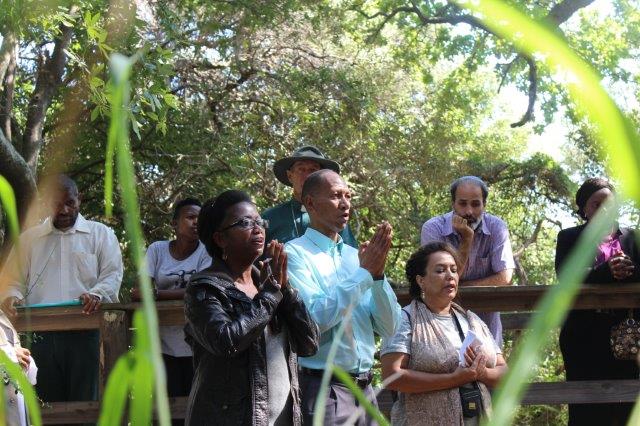 “We have to fiercely protect our water everywhere as a commons.”

Maude Barlow spoke about the role each one of us needs to play in resisting and halting the commodification of water. Water is a human right, a right of all creaturekind and a public trust – it cannot be converted into a private asset; water is not just another commodity.

We all need to conserve water as individuals, institutions and organisations but we also need to address the role of agriculture as a big water consumer. Agriculture consumes 66% of the water used in South Africa, a disproportionate quantity of which is consumed by the farming of animals, in particular the largescale, intensive farming of animals. Only by reducing our consumption of meat, dairy and eggs, can we begin to address this. (One inspiring way of doing this is by joining the Green Monday movement) 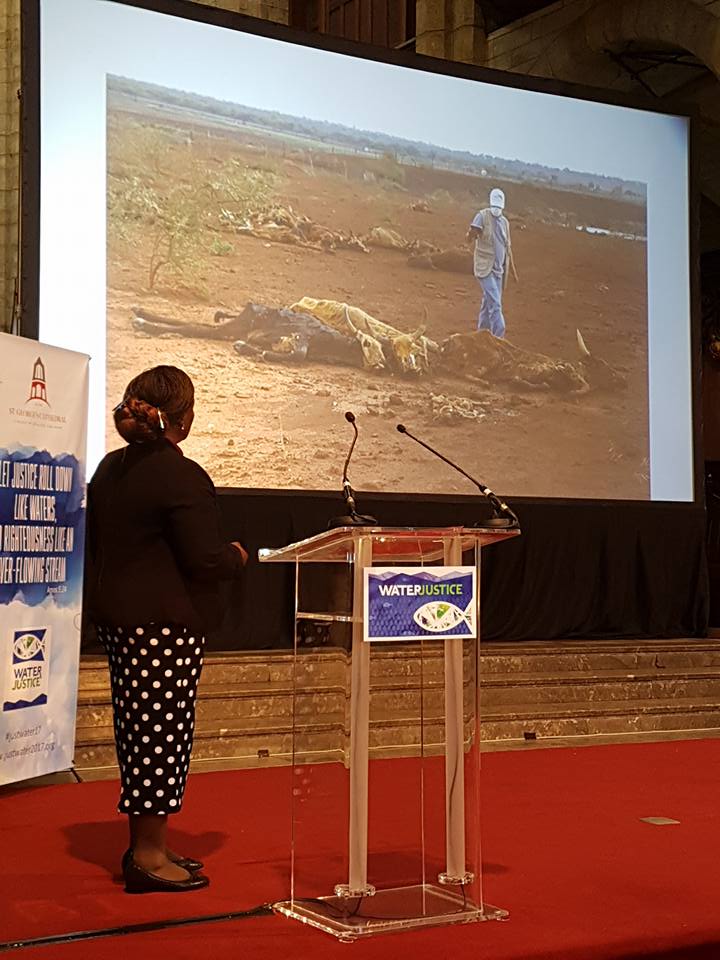 Bishop Ellinah Wamukoya looks at her photo of cattle that died of thirst as she speaks to the tragedy of the recent drought in her country, Swaziland.

We need to curtail activities that drive global warming

Equally urgent is the need to curtail, if not eliminate, the human activities – mainly the burning of fossil fuels, cutting down of rainforests and ‘factory farming’ of animals – that are driving global warming and consequent climate change.

We need to protect our groundwater sources from pollution, invasion by alien vegetation and overgrazing.  In some catchment areas up to a third of the water is sucked up by alien trees and the overstocking of goats, cattle and sheep results in over-grazing which compromises the earth’s catchment capacity and causes soil erosion and the loss of top-soil.  In South Africa a mere 8% of the land provides 50% of our surface water, yet there is still no mention of water source areas in South African legislation.  WWF-SA reminds us that “water does not come from a dam, pipe or tap –  . . . water supply issues cannot be solved by building more dams or creating more infrastructure. It requires rehabilitating, maintaining and conserving the natural areas which form the critical . . . [catchment areas] for our country.”

Efficient and economical use of what water we have is essential.

Currently in South Africa about a quarter of harvested water is leaking out of our poorly maintained built infrastructure. Water saving needs to happen at all steps along the distribution chain if we are to use water responsibly.

But most importantly the conference generated . . . 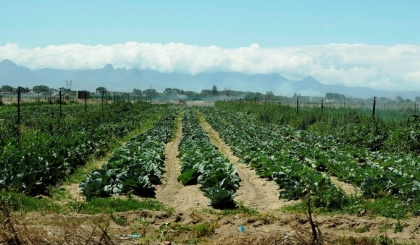 At the end of the conference two public statements were issued that the participants of the conference had worked on. Those that had participated called upon faith communities and all levels of Government to work for water justice as a matter of urgent priority in the Water Justice Statement 27 March 2017.  Most immediately we called upon the City of Cape Town to refuse to allow rezoning of the Philippi Agriculture Area for other than agricultural purposes, and to do everything possible to protect and conserve the Cape Flats Aquifer which together are key to a food- and water-secure future for Cape Town in the Philippi Hortucultural Area Statement.

The statements quoted Archbishop Makgoba who had asked the conference earlier, “What does development mean if it destroys the water and destroys the food?”  One of the statements concluded with a warning to the authorities: “we will use all the resources at our disposal to prevent the destruction of the Philippi Horticultural Area.  Just as the churches opposed racial segregation in the Apartheid era, so we now oppose environmental destruction.”

There is much work to be done by us all.  For some ideas of what we as individuals and what our faith communities can do practically, see http://www.justwater2017.org/mission/ and see Archbishop Makgoba’s address to the conference at https://www.facebook.com/GreenAnglicans/posts/1253083564787057.

For those in Cape Town who would be interested in attending a follow-up workshop to plot a practical way forward, please email frank.molteno@gmail.com. 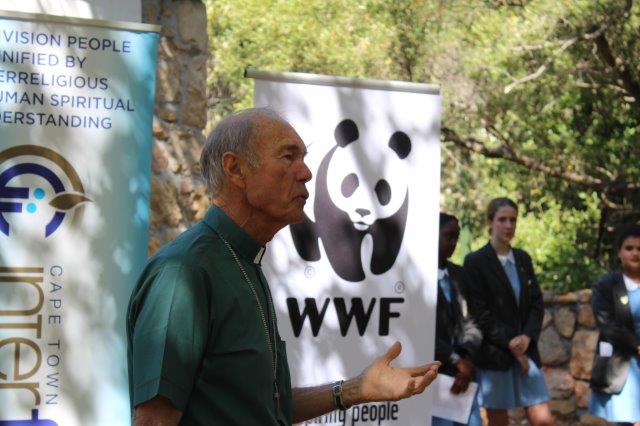 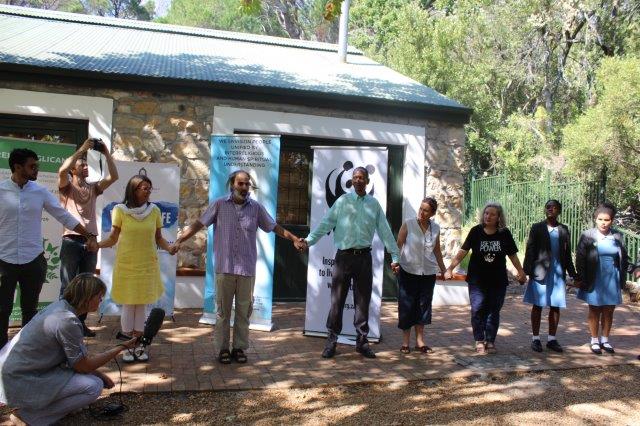 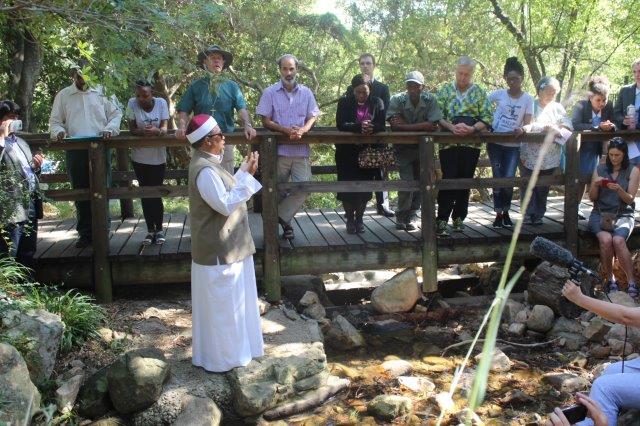 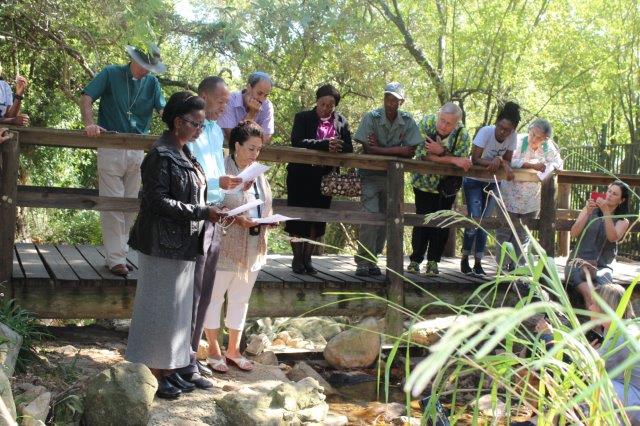 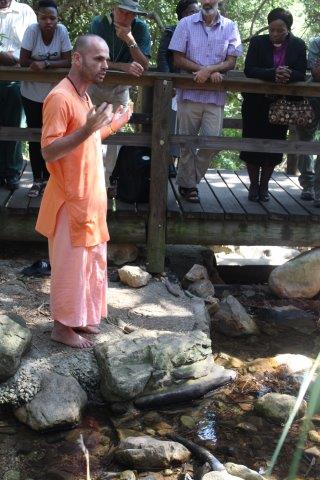 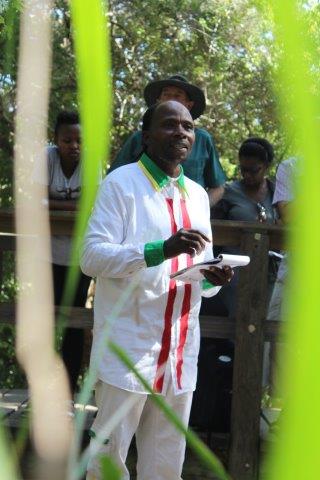 *The conference was hosted and generously sponsored by Trinity Church, Wall Street, in New York and co-hosted by St George’s Cathedral in Cape Town, St Paul’s Cathedral in London and St Paul’s Cathedral, Melbourne. Local partners included WWF-SA, Green Anglicans and UCT’s Future Water Institute. Much of the conference was connected, through web-streaming, and covered global issues. The session which The Most Revd Dr Thabo Makgoba, Archbishop of Cape Town, addressed, was streamed live from Cape Town.