Faith groups and activists in Africa, united by the desire to prevent catastrophic climate change, are launching a cycling caravan, to call on the governments of Africa and the world to stand with people on the frontiers of the climate crisis, the vulnerable communities whose voices need to be heard.

We Have Faith – ACT Now for Climate Justice is a joint Pan African initiative of the We Have Faith, Act Alliance PACJA and Oxfam in Africa

This Saturday, 29th August sees the launch of the Pan Africa Cycling Caravan from Maputo to Nairobi on around 14thNovember, after travelling through South Africa, Botswana, Zimbabwe, Zambia, Malawi, Uganda, Tanzania and finally Kenya, covering about 6,500km.

The launch is expected to be presided over by His Excellency the President of Mozambique. Others expected to attend include Government Officials, the ACT Global Ambassador Representative, Bishop Carlos Matshinhe, the Climate Justice National Ambassador in Mozambique Rev. Marcos Macamo among others.

There will be various activities such as cultural performances, prayers from different faith communities, and a music concert.  After a weekend of action and mobilisation, the cyclists leave the city on 31st August (to coincide with the first day of the UN Climate Talks in Bonn).

The Pan Africa Cycling Caravan for Climate Justice is launched! Cyclists are setting off on a 6500km journey from Maputo to raise the voices of people at the forefront of a changing climate. The caravan will go through South Africa, Botswana, Zimbabwe, Zambia, Malawi, Uganda, Tanzania to Kenya. Along the way we’ll collect one million signatures and hope to plant one million trees (Adopt-A-Tree).

Join us here as we call on governments of Africa and the world to act now for climate justice www.wehavefaith.net , www.actclimate.org

For more information on activities in Mozambique, please contact any the following: Higino on higino.filimone@hotmail.com , Benson on BIreri@christian-aid.org, Penelope on Penelope.Kamungoma@nca.no or Deborah on dikaroot@gmail.com. 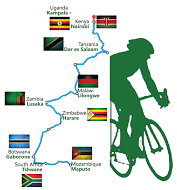