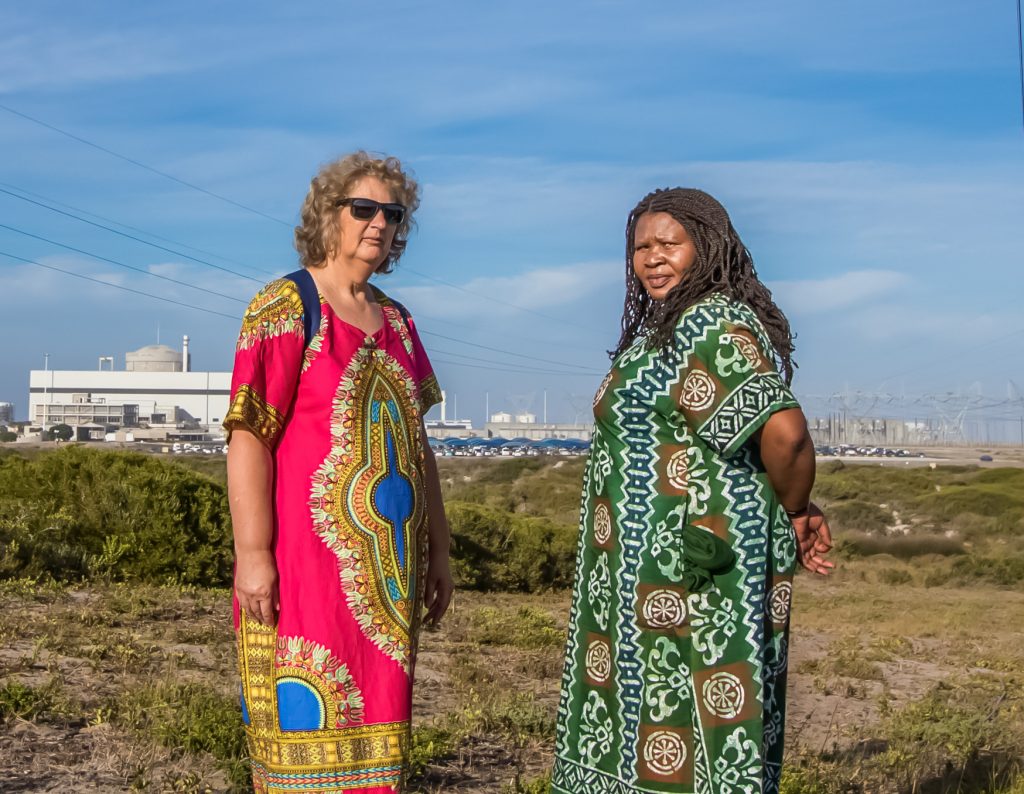 The Southern African Faith Communities’ Environment Institute (SAFCEI) congratulates our own Liz McDaid, and Makoma Lekalakala of Earthlife Africa Johannesburg (ELA JHB), on their Goldman Environmental Prize this Earth Day week. Liz and Makoma have been recognised for their leadership in the struggle against an unlawful nuclear energy deal in South Africa.

We give thanks and express our gratitude to Liz and Makoma for their tireless dedication and commitment to standing up for justice for all South Africans and our environment.

As a multi-faith organisation, SAFCEI believes that our role on Earth is that of custodians. In this context, we deeply appreciate the unwavering commitment and personal sacrifice made by Makoma and Liz, as they led in this fight to stop the South African government from spending R1-trillion on nuclear energy.

SAFCEI’s Executive Director, Francesca de Gasparis, says “SAFCEI is immensely proud of Liz and Makoma, and the recognition they are receiving for their work on the nuclear deal, with the Goldman Environmental Prize. We commend their tenacity and commitment to blowing the lid off the secret and corrupt nuclear energy deal – which would have bankrupted South Africa and set us back generations in terms of development.”

“SAFCEI and ELA JHB are small environmental organisations, which through the knowledge and experience of Makoma and Liz, identified the threat and depth of corruption of the nuclear deal, and took the South African government to court, winning against the odds. It was a victory of David and Goliath proportions. Makoma and Liz went the extra mile in personal commitment and actions, promoting the constitutional rights of all South African citizens. We are thrilled that they are being honoured in this way. The message we want amplified around the world is that Africa does not need nuclear energy, and we will continue to fight tooth and nail to keep nuclear off this continent,” adds de Gasparis.

Bishop Geoff Davies, Patron and Founder of SAFCEI, was full of praise for recipients, saying, “We are thrilled that McDaid and Lekalakala have been recognised for the leadership role they played in this struggle. Both have had a lifetime of working for justice. The Goldman award is worthy recognition of their courage.” He emphasized that “the perseverance and commitment of a few dedicated people like McDaid and Lekalakala and their colleagues can call corrupt politicians to account and give a new sense of optimism to civil society.”

Kate Davies, co-founder of SAFCEI said “We are immensely proud of Liz and Makoma. Their courage, determination, leadership and humour were an inspiration to many of us who felt powerless to influence or contest growing evidence of presidential and state corruption that would entrench greater poverty in our country.”

Biographies of Liz and Makoma, Africa’s Goldman Prize recipients for 2018

Resident in Cape Town, Liziwe McDaid is an environmentalist who serves as the Eco-Justice Lead of the Southern African Faith Communities’ Environment Institute (SAFCEI), a multi-faith environmental organization dedicated to confronting environmental injustice.

She trained as a scientist and has a Masters in Climate Change and Development from the University of Cape Town. She started out as a teacher-turned educational advocate and activist against apartheid, before turning to faith-based environmental justice.

She has been campaigning against nuclear energy for decades, thwarting previous attempts by the South African government to develop the nuclear industry.

She has worked at the energy/ poverty/ community nexus with a focus on participative governance for over 25 years, and is also a founder member of The Green Connection – an NGO which believes that empowering people to participate in their environment is the only way that truly sustainable development can take place.

Makoma Lekalakala was raised in Soweto and is the Director of Earthlife Africa Johannesburg, a largely volunteer-driven organization that mobilizes South Africans around environmental issues. She was a youth activist in her church, moving to trade unions, then women’s rights, social and economic justice, and finally environmental justice.

She divides her time between her home in Johannesburg and the ELA JHB satellite office in Limpopo Province, where pollution from power stations and coal mines has contaminated local communities to such an extent that farmers can no longer safely grow crops.

Lekalakala also works with the Life After Coal/Impilo Ngaphandle Kwamalahle campaign – a joint campaign by Earthlife Africa Johannesburg, groundWork, and the Centre for Environmental Rights – which discourages investment in new coal-fired power stations and mines. The campaign strives to accelerate the retirement of South Africa’s coal infrastructure, and enable a just transition to
renewable energy systems for the people.

Together we can achieve more

After obtaining the secret agreement between South Africa and Russia in 2014, Earthlife Africa Johannesburg joined forces with SAFCEI to oppose the deal. Once they fully understood the scope of the deal’s financial and environmental implications, Lekalakala and McDaid, together with their colleagues and partners, developed a nationally-focused strategy to challenge the project – and the State itself.

The agreement had been kept secret and had bypassed the required legal processes – excluding any public consultation or parliamentary debate. This, coupled with the mounting evidence against nuclear technology globally (more and more countries were shunning nuclear energy, conceding to its associated risks and impacts), drove SAFCEI’s decision to oppose the deal.

McDaid and Lekalakala not only challenged government, but also engaged and mobilised people in faith and grassroots communities, equipping them with information and explaining the financial risks and environmental, and human health impacts of the proposed nuclear plans.

The link between the ongoing high-level government corruption and the nuclear deal – the late-night cabinet reshuffles and the secret meetings designed to exclude the public – became more and more obvious to South African citizens.

As a way of getting Parliament’s attention, McDaid and SAFCEI organised weekly anti-nuclear vigils in front of the South African Parliament in Cape Town.

Furthermore, Lekalakala and McDaid organized marches and public rallies against the nuclear project, protesting across South Africa. The nuclear court case finally came to a head on 26 April 2017, with the Western Cape High Court ruling the nuclear deal as ‘unlawful’ and ‘unconstitutional’.

McDaid and Lekalakala concur that “It was never about energy, but rather aboutthe greed of a few individuals.”