“Laudato Si’, mi Signore” – “Praise be to you, my Lord”: Conversations with Pope Francis 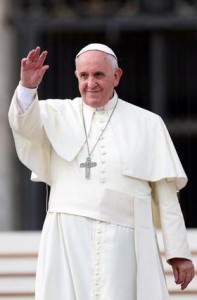 In his recent Encyclical, Pope Francis has opened a dialogue on how to take care of our Common Home. He has clearly opened this dialogue to all people of good will because we all share this Common Home, Catholic and non-Catholic all alike. The Pope has masterly and prophetically reflected on what is currently going on in our Common Home and given us the tools to reflect on these problems and to find solutions to them.

When reading this encyclical we should look at what is happening at our home front, in this way the Encyclical will become more meaningful to us, and allow for a profound and deep dialogue with the Pope. He is asking us to go deeper into these issues and this we have to do.

At the very beginning of his letter, the Pope places his teaching in the context of what has already been taught by his predecessors, namely St John Paul 11, as well as Pope Emeritus Benedict xvi to name but a few. This teaching that the Pope gives to us has been added to the body of the Catholic Social Teaching, so for  Catholics it is binding, yet it is also a conversation which should continue until our Common Home is fully restored to its original dignity.

While the Pope points out the wrongs that we have done to our Common Home as human beings, he is not pessimistic about our human capability to do what is right. He is therefore not playing the devil’s advocate; if anything, this is a very powerful voice of a prophetic leader crying out in the desert for the full restoration of God’ creation which is “very good” (Genesis 1:31b).

Reality on the ground shows us that the beautiful creation that God once spoke about as something good, “…is beginning to look more and more like an immense pile of filth.  In many parts of the planet, the elderly lament that once beautiful landscapes are now covered with rubbish” 21.

This results from a consumerist society which comes at the expense of the rest of Creation. In our consumerism we are not aware that the resources that we have are finite and that there are limits that ought not to be stretched. Already we have stretched the limits of the planet without giving the resources time to recuperate.

The Pope goes on to talk about the throw away culture which is largely responsible for turning the earth into this state. The sad fact is that some parts of our society throw away food while millions in other parts of the world go hungry. In our own backyard we have a minority who are so shoulder deep in corruption, who embezzle funds, while many are not even able to afford descent housing, education, jobs and even food. The Pope in this encyclical therefore calls us to right relationships that have gone wrong; relationships among ourselves as human beings as well as the rest of Creation.

We are part of nature, included in it and thus in constant interaction with it.

In chapter 4 of his Encyclical, Pope Francis introduces us to the concept of Integral Ecology. As human beings we have failed to assume our rightful place in nature. We have put ourselves above nature, however, we are not above it but a part of it, as observes Pope Francis: “Nature cannot be regarded as something separate from ourselves or as a mere setting in which we live. We are part of nature, included in it and thus in constant interaction with it” 139.

Our actions show that we relate with nature as ones who think we exercise superiority or in the most contentious word, “dominion” over God’s creation. Here I am reminded of a famous, or infamous depending on one’s ideological position, article by Lyn White JR. (1907-1987), “The Historical Roots of Our Ecological Crisis”. In this article, White postulates that “Christianity bears a huge burden of guilt” and “We shall continue to have a worsening ecological crisis until we reject the Christian axiom that nature has no reason for existence save to serve man.”

White received a lot of criticism from biblical and other scholars for his oversimplified explanation of the ecological degradation. He however opened a new conversation among different scholars on the current problem of the ecological destruction that is happening. He helped make the case for people of faith to take responsibility for the environmental degradation taking place.

These are the kinds of the conversations that we should be engaging with, not simply as a name and shame game but as a way of eventually getting to solutions to the current problems we face today. Our own Bishops at the Southern African Catholic Bishop’s Conference have stated: “Everyone’s talents and involvement are needed to redress the damage caused by human abuse of God’s creation” SACBC, Pastoral Statement on the Environmental Crisis (5 September 1999).

This earth that we live in is not just for ourselves but also for all the future generations.

This earth that we live in is not just for ourselves but also for all the future generations. We have to live in it and leave it in good shape for them; we owe it to ourselves and to our children and our children’s children.

Last but not least the Pope calls us to what he has termed the Ecological Conversion. In this conversion we realize that we are not above nature but part of it and that we are all inter-connected therefore forming one web of life. This realization will hopefully lead us to a conversion were we assume our rightful place in nature and take care of God’s creation as stewards knowing that by cultivating this earth and beautifying it, we are in the words of Mother Teresa of Calcutta, “Doing something beautiful for God”.