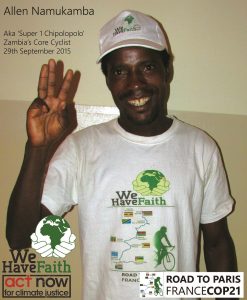 The 6,500 km cycling campaign is now in Lusaka, after a single handed Allen braved 193 kilometres to the capital, Lusaka. He is married with two boys and a girl child and received a hero’s welcome led by the Council of Churches in Zambia (CCZ) officials at Lilayi, some 20 kilomtres out of the city.

From Lusitu in Chirundu District, southern Zambia, Allen is excited to be the torch bearer for the Zambian leg, particularly that he quit producing and selling charcoal and turned into a pro-environment activist in his community.

“Government officials from the forestry department came and did some awareness in our community. I was convinced that I quit the charcoal business and became a welder. Along with this change I began to conduct awareness meetings in my community against destroying the environment – especially cutting down of trees,” he says.

He also muses at the way the Zambia WHF team, led by coordinator Abraham Chikasa, engaged him.

“It is the work of God. I was going about my business from Lusitu in Siavonga when I saw this car follow and then stop me. They told me about the campaign. Since I am also an environment enthusiast and has been cycling since I was 14 when my father was a professional cyclist, I agreed to cycle for this important cause,” explains Allen, who says despite his bike being a rusty old one, he ensured he cycles from Siavonga to Lusaka to show that issues of climate change were dear to his heart.

“I have papers from the forestry department and the police in my area that gives me some possibilities to bring those who destroy our forests to the authorities. I speak to my community about the dangers. Now we barely have any rains and Lake Kariba is drying out. Many people are suffering and it is important to show people the connection with their economic, health, education, and other social challenges.”

Allen, who will be joined by 20 more cyclists from Lusaka, will proceed with the journey to Malawi for an official handover at Mchinji on8th October, making strategic stops to talk about the environment and catch some rest.

His only prayer is for someone to support him with a better bicycle. One he can use to turn his riding passion into an international sporting opportunity for Zambia and a transportation tool in his community as he goes about ‘preaching’ environmental friendly activities.

He says he also takes care of his late uncle’s two children, both boys. Together, he sends all the five children to school, and fends for their daily needs.