This is the We Have Faith – Act Now for Climate Justice campaign’s objective, as COP21 in Paris draws close.

The ‘We Have faith – Act Now for Climate Justice’ is a multi-faith campaign that is anchored on the moral responsibility to care for the earth and a strong ethical message for climate justice. It seeks to mobilise faith communities and youth across Africa and raise awareness on climate change.

This year the campaign will be hosting a youth cycling caravan which will start in Maputo, Mozambique and end in Nairobi, Kenya, passing through South Africa, Botswana, Zimbabwe, Zambia, Malawi and Tanzania. The cycling is a symbolic event demonstrating practical action which anyone and everyone can adopt to reduce carbon emissions. Low carbon development has been a major component of international negotiations on climate change. 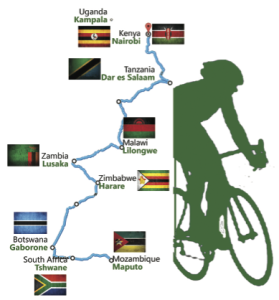 A team of professional and amateur cyclists, drawn from each participating country, will be cycling in relay style through the participating countries. The cycling caravan will leave Maputo on the 31st August and finish in Nairobi on 8th November where several other events have been planned as a culmination of the campaign.

The million signatures, to be collected along the way as well as before and after, together with the awareness raised is the main goal of this endeavor. These climate justice petitions have both global demands directed at the world leaders, as well as national demands aimed at national and regional leaders. The aim of these signatures is to add a Pan-African, faith-based voice to COP21 and put pressure on the national and world leaders to deliver on climate justice and commit towards fighting climate change.

Each country will host a Climate Justice concert as the cyclists pass through with a final, big concert to be held in Kenya to further raise awareness on the issue of climate change.

The We Have Faith – Act Now for Climate Justice campaign is part of many initiatives that are leading up to the COP21 talks in Paris, happening in December. Here governments and civil society members will meet to discuss policy around climate change and come to an international climate agreement. The aim is to keep global warming below 2ºC as well as address affected societies’ adaptation to climate change. Many hopes are pinned on COP21 to be the much needed definitive step forwards in addressing this issue. As it says on the official COP21 website:

“The stakes are high: the aim is to reach, for the first time, a universal, legally binding agreement that will enable us to combat climate change effectively and boost the transition towards resilient, low-carbon societies and economies.”

Especially in Africa where climate change is being felt by many marginalised communities COP21 becomes a critical process to engage with to ensure that the outcome secures the fight against climate change and safeguarding the environment.

You and your faith community can get involved by supporting the cycling caravan and concerts if they are in your area. To stay updated on these, keep checking our Earth Keeper website. Alternatively follow the campaign on We Have Faith’s social media: @ActNowForCJ (#ActNowForCJ #ActOnClimate) and Facebook We Have Faith – Act Now for Climate Justice. And lastly do not forget to sign the petition – we want to hear your voice of faith speaking out against climate change!