The end of the We Have Faith cycling caravan in Nairobi was marked with 3 summits – The People’s Summit, The Faith Leaders Summit and The Parliamentarians Summit – as well as a march and a concert. Lydia Mogano reports back. 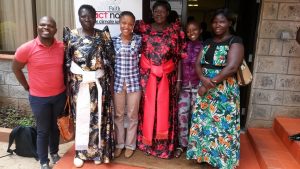 The two day People’s Summit began with a celebration of how far the We Have Faith (WHF) caravan had come. This summit involved many NGOs, FBOs as well as inspirational rural women farmers from Eastern, Western, Central and Southern Africa calling for a unified voice of Africa towards COP21.

The People’s Summit took place in parallel with two similar events, the Faith Leaders and Parliamentary Summit and the aim was to develop a common declaration ahead of COP21 in France.

In the first session innovation in the context of climate change adaptation was explored, especially if COP21 is to deliver a weak or no agreement at all. Creativity and technological innovation are needed in a changing climate and society and young people need to take advantage of this opportunity even if agriculture would remain primary for Africa’s future in line with the Sustainable Development Goals (SDGs).

The next session focused on the UNFCCC progress from the historical background of the COP since Copenhagen, climate science and politics. Copenhagen attempted to raise climate ambition and this failed because it was mostly a top-down approach. This time there is a general agreement that there will be no common agreement without the concerns and values of the people being included.

There was a strong call for African leaders to be in touch with the realities of climate experiences from local people in their countries with the aim to negotiate for the people’s interests especially when climate injustices continue to thrive. 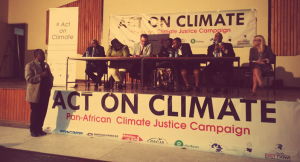 Amongst finance, technology transfer and adaptation is a very sensitive issue that seeks to address compensation to climate change victims. There was also a proposal to set up a committee on gender and climate change especially when considering that it is women and children who experience the most impact. “It is not fair to negotiate a loan that grandmothers need to pay and also leave it behind for their grandchildren to pay” (Mama Victoria, rural Woman farmer).

The US Ambassador (who is also a Reverend) spoke about the type of legacy we leave behind for the next generations and that what the WHF campaign has begun (especially the cycling caravan) is a courageous faith exercise. He also emphasized that civil society’s work should continue on beyond COP21 because the root cause of climate vulnerabilities are complex.

However, he encouraged us all that everyone has a story to tell to challenge world leaders to pay attention and respond justly. He went on further to acknowledge that we all have reason to act urgently seeing that the challenge before us is huge, whilst we have so little time left to keep the global temperature below 1.5 degrees Celsius. The conclusion was that there is a brighter future if we all act responsibly; it is this energy – solidarity in diversity – that will support this vision, and he urged the summit to protect the civil society space and voice.

After lunch, we broke into groups to discuss and share experiences on climate innovations in Africa. We learnt a great about how a community recycles waste from a local butcher to develop biogas, how young people adapted their land to start trout fish farming, how others started a prepaid solar energy business (viz., M-Copper) to serve their communities and how a young man from Benin developed a water harvester.

One of the key messages was that climate innovation and adaptation requires awareness and understanding of one’s interrelationship with the environment and surrounding because that’s where the solutions lie. Moreover, in order for Africa to have a climate smart technology revolution, we want governments that are responsive to innovation. One way to facilitate this process it to find ways to bridge the communication gap between CSOs and governments. For instance, investment in science and research development (in modern and indigenous knowledge systems) as well as in women and youth are key on this regard.

At the end of this session, we developed the civil society position to share at the next event at the University of Nairobi. The purpose of this joint public session was to share different presentations from the faith, CSO and parliamentarian summits to have a consolidated Africa People’s position to COP21 to initiate discussions and feedback. Although we didn’t have enough time to draft this consolidated document at this event, I am pleased to confirm that all the different statements spoke the same language (see the WHF petition).

WHF March and Concert
On Saturday, we travelled to the central park to engage in a 12km march for climate justice in the streets of Nairobi. You can imagine the traffic caused in the already overburdened traffic of Nairobi – we definitely put Nairobi to a standstill. We ended the day with vibrant concert and had a public declaration of the petition through various campaign coordinators from PACJA, OXFAM, and WHF. So far we have collected just over 327 000 petitions (both online and hard copies).