Government is presenting on what South Africa’s commitments will be going into COP21, in Paris. 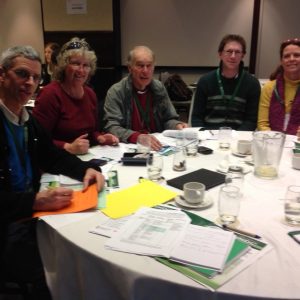 The government is presenting that South Africa supports the 1.5 degree target of the Africa group. In adaptation, programmes like working on water, working on fire were put forward but other adaptation commitments were only about putting information systems in place and such commitments also indicate that these systems are dependent on an international agreement being achieved.

The South African green fund has about R1 bn from treasury and claim that government has also contributed to renewable energy. Mitigation includes nuclear… Questions are being raised about whether what we say has any value as the presentations are not really being presented as drafts.

DEA rep from national government assured the gathering that cabinet had approved the INDC for rigorous stakeholder consultation but that in considering such comments, the officials will have to balance different needs in the country. It is difficult to understand how much weight our comments will have.

Various stakeholder groups raised the issue that nuclear should be removed from the INDC, as it is a false solution to climate change. There was no disagreement and government promised to look at how this can be addressed.

The Western Cape government has also committed to holding a similar stakeholder meeting post COP21 in order assess what agreement was reached and how this impacts on our national implementation plan going forward.