Sewage in the Sea 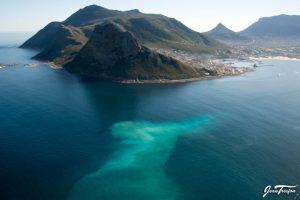 Disposal of sewage, especially in a city like Cape Town, is a smelly business. However it has become an even smellier affair recently when photographs and accounts of kayakers and surfers have shown that Cape Town’s marine sewage outlets have reached dangerous levels.

Whilst the city of Cape Town has been allowed in the past to make use of marine sewer outfalls at Hout Bay, Camps Bay and Green Point, the outcry has shown that these permits are not up to date.  They are now scrambling to reapply for them and there has been an effort from various organisations to submit comments on the City’s application to continue spewing raw sewage into the sea.

The period for comment and recommendation on these permits ran from 1st June – 10th July and the Greater Cape Town Civic Alliance (GCTCA) has been vocal in urging the city to look into alternative methods of disposing the sewage. It submitted a recommendation that called on the Department of Environmental Affairs to refuse the City’s application and come up with disposal methods that are sustainable and more environmentally friendly. “The time has come for new, innovative, environment friendly solutions to the problem of sewage and associated waste water disposal. The Newtown Creek and Whangerei plants are pointers of the way to go,” the GCTCA wrote.

The outfalls date back about 25 years when there was little knowledge of the harmful effects of raw sewage to marine life, and to all who spend time in Cape Town’s waters. Today, however, we know more than enough about the damage that can be done.

Professor Leslie Petrik, at the University of the Western Cape, has done studies that show “that many partially metabolised prescription drugs, pesticides, herbicides, household disinfectants and even paracetemol and caffeine are passing unchanged through the local effluent treatment systems in the Western Cape…When you consider the volumes of these compounds being discharged into sewerage waste waters, we are confronting a huge environmental disaster of unforeseen magnitude.” And that is not even taking into account the impact of the more visible compounds contained in sewage.

Patrick Dowling from WESSA also points out that one cannot compare the situation of today to 25 years ago. “While direct discharge of sewerage to the sea may have been a legitimate option decades ago given relatively small population size, less chemically complex effluent, fewer engineering options and a dynamic coastline where rapid aeration and dilution could be relied on to “process” waste water, it certainly is not acceptable practice nowadays. Many coastal dead zones around the planet are due to this exact problem.”

Human health is also under risk, as surfers and kayakers report of becoming ill after spending time in the waters near these sewage outlets. Eddie Bisset, a kayaker, commissioned an e-coli test at Three Anchor Bay when he fell ill after a kayak excursion in which he did an Eskimo roll. The test showed a level of 300 cfu per 100ml of sea water – this is 50 over the limit of the maximum level allowed for a Blue Flag beach.

As people of faith we question Cape Town’s reluctance to move away from this disposal method. There are other solutions as New York’s Newton Creek has shown and Cape Town should be seriously exploring these. However there also needs to be an emphasis on individuals to help address this problem – for it is us after all who are producing this waste. As Patrick Dowling says, “[There needs to be an emphasis on] controlling the quality of sewerage coming from domestic, agricultural, industrial, medical and commercial sources. In other words everybody would become duty bound to manage their waste water, pre-treating it where necessary instead of adopting the current “flush and forget” attitude. A country as water-scarce as South Africa should be proudly leading the wise water way and the City of Cape Town with its considerable human, technical and financial resources should be in the forefront.”

We should all give a thought to the many things we flush away and look at ways we can reduce our water waste. And if you live in Cape Town or the surrounding area, add your voice of faith by writing a letter to your local newspaper so as to keep this issue in the public consciousness.

“We ourselves feel that what we are doing is just a drop in the ocean. But the ocean would be less because of that missing drop.” Mother Theresa.

Read WESSA’s response here. Dr Jo Barnes from the Division of Community Health at the University of Stellenbosch has also written a comprehensive response that highlights several issues of concern, including the non-transparency of the public participation process.

The photo was obtained from the following online platform: http://www.wavescape.co.za/surf-news/breaking-news/city-stink-story.html