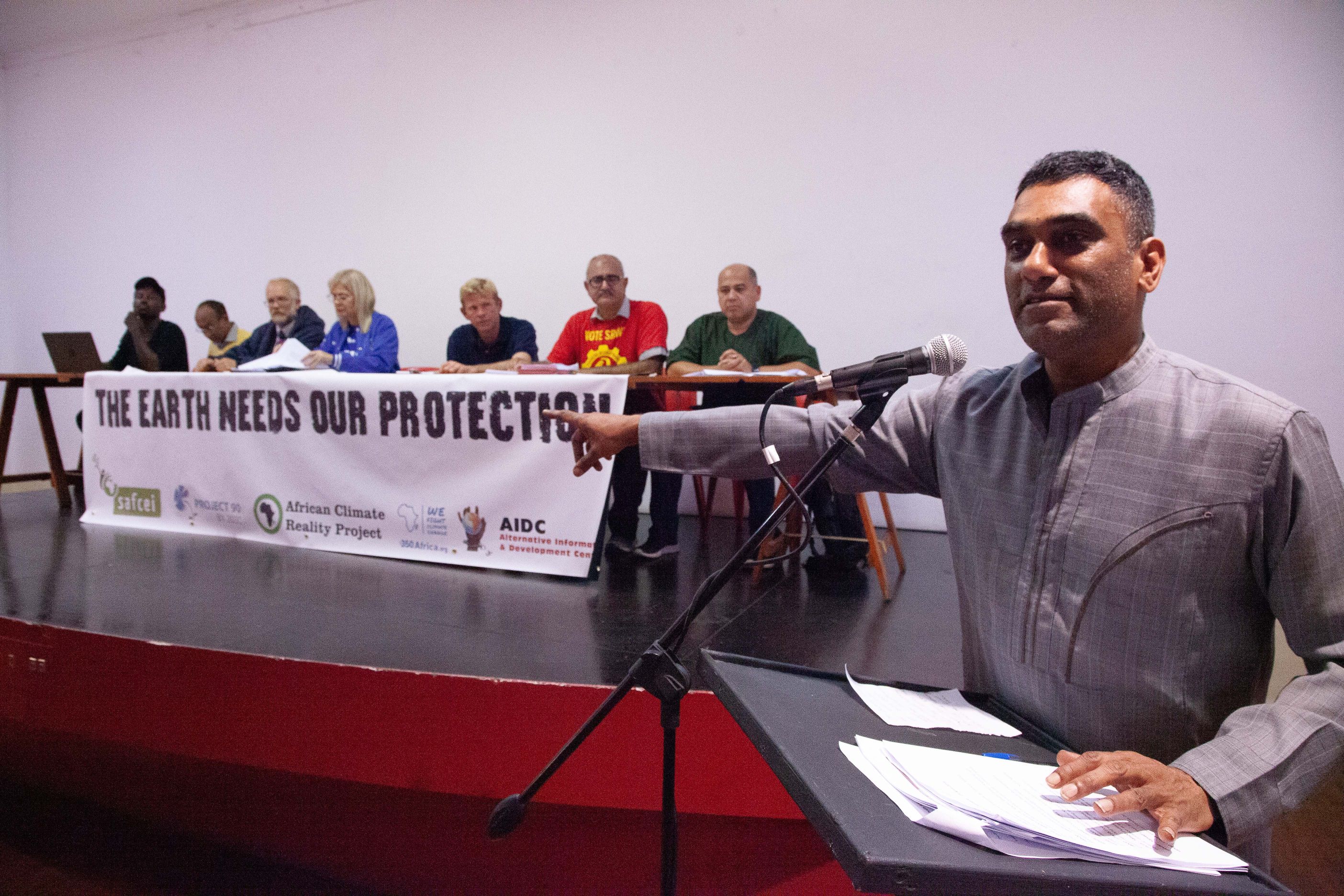 South African Secretary-General of Amnesty International, Kumi Naidoo tells parties that if we continue on the path that we are on – with dirty energy coming from oil, coal, nuclear and gas, and by deforestation and other polluting economic activity – this will result in a loss of soil and water resources. “We must act now, to protect humanity’s ability to live on this planet.” Photo Credit: Ryan Fortune Photography

The coalition – which includes the Southern African Faith Communities’ Environment Institute (SAFCEI), Project 90 by 2030, the African Climate Reality Project (ACRP), AIDC-One Million Climate Jobs Campaign, 350Africa.org, and the Environmental Monitoring Group (EMG) – says it is significant that the debate has been held at a time the continent is experiencing a number of devastating extreme weather phenomena.

SAFCEI’s Energy Justice Coordinator, Vainola Makan says, “Mozambique and surrounding countries have been hit by two cyclones within a few short weeks of each other. In South Africa, Durban is experiencing its worst recorded floods, whilst in other parts of the country people are having to survive ongoing droughts. We cannot continue to ignore what is happening around us, because these are clearly the impacts of climate change.”

The debate was centred around a non-partisan analysis – based on a scorecard made by the Action 24 project – of the manifestos of eleven political parties. Questions posed to party representatives covered sustainable and low-carbon energy systems, air quality and health, greenhouse gas emissions reduction strategies, fundamental changes needed to address the climate crisis, and climate justice for the poor.

Secretary-General of Amnesty International, Kumi Naidoo, who moderated the debate says, “If we continue on the path that we are on with dirty energy coming from oil, coal, nuclear and gas, and by deforestation and other polluting economic activity, the end result is that we lose our soil and our water resources, as we are losing them in many parts of Africa. Sea levels will rise, which will contaminate agricultural lands along the coast. We will not be able to plant food, and we will not have water to drink.”

“We must act now, to protect humanity’s ability to live on this planet. Because, the truth of the matter is, the Earth does not need humankind to survive. We are the ones who need the Earth,” adds Naidoo.

SAFCEI’s Executive Director, Francesca de Gasparis says, “At this critical juncture in South Africa, ahead of the general elections in May, having Kumi join us to ask political parties how the environment is reflected in their party manifestos, demonstrates that environmental rights are human rights. The two cannot be separated and every party in South Africa should have clear, ambitious targets to address our energy, climate, and other environmental needs.”

According to Thembeka Majali from AIDC, “The town hall-style debate allowed for much-needed public input into issues that affect people on the ground. Concerns were raised about the lack of protection and conservation efforts for wetland areas. Others were concerned about government’s abuse of natural resources, the urgent need for cleaning of catchment areas and other water resources, and also the rehabilitation of river systems. There is also a need to detoxify land in the old mining communities. These should all form part of decision making processes that are in the public’s interest. Further still, people wanted more positive action and leadership from their government, while others highlighted a lack of access to the resources needed to adapt to the changing climate, and sustainable climate jobs’.

Noelle Garcin, Action 24 Project Manager says “It was interesting that most panellists acted as if climate change and the environment were central in their party’s political vision, because their manifestos tell a different story. Our analysis revealed that most parties fail to mainstream these issues across all sectors, and offer no coherent policy proposals that demonstrate their commitment to a low-carbon, sustainable and just future.”

“One party representative said that had he known of the scorecard, the party’s manifesto would have been amended to “make it the absolute leader in South Africa.” The fact that parties need a scorecard to properly address climate issues in their manifestos, is evidence that politicians still see the climate and environment as non-priority issues. These attitudes reinforce the importance of our efforts to make these issues explicit on the country’s political agenda and to facilitate platforms where the public can demand more action from the parties representing them in Parliament,” says Garcin.

According to the coalition, some of the parties made commitments at the debate, which are absent from their party manifestos. COPE, for example, said they would get rid of coal by 2025 and would ban all diesel and petrol cars by 2030. The DA committed to banning single-use plastics in the Western Cape by 2025.

Lorna Fuller, Director of Project 90 by 2030 says, “We urge South Africans to #VotefortheEnvironment when they head to the polls on 8 May. Citizens must choose leaders who recognise the urgency for climate change action and prioritises it in its policy agenda. We need a political party that stops protecting big business, but instead develops policies that will protect the environment, protect our workers and empower our people.” 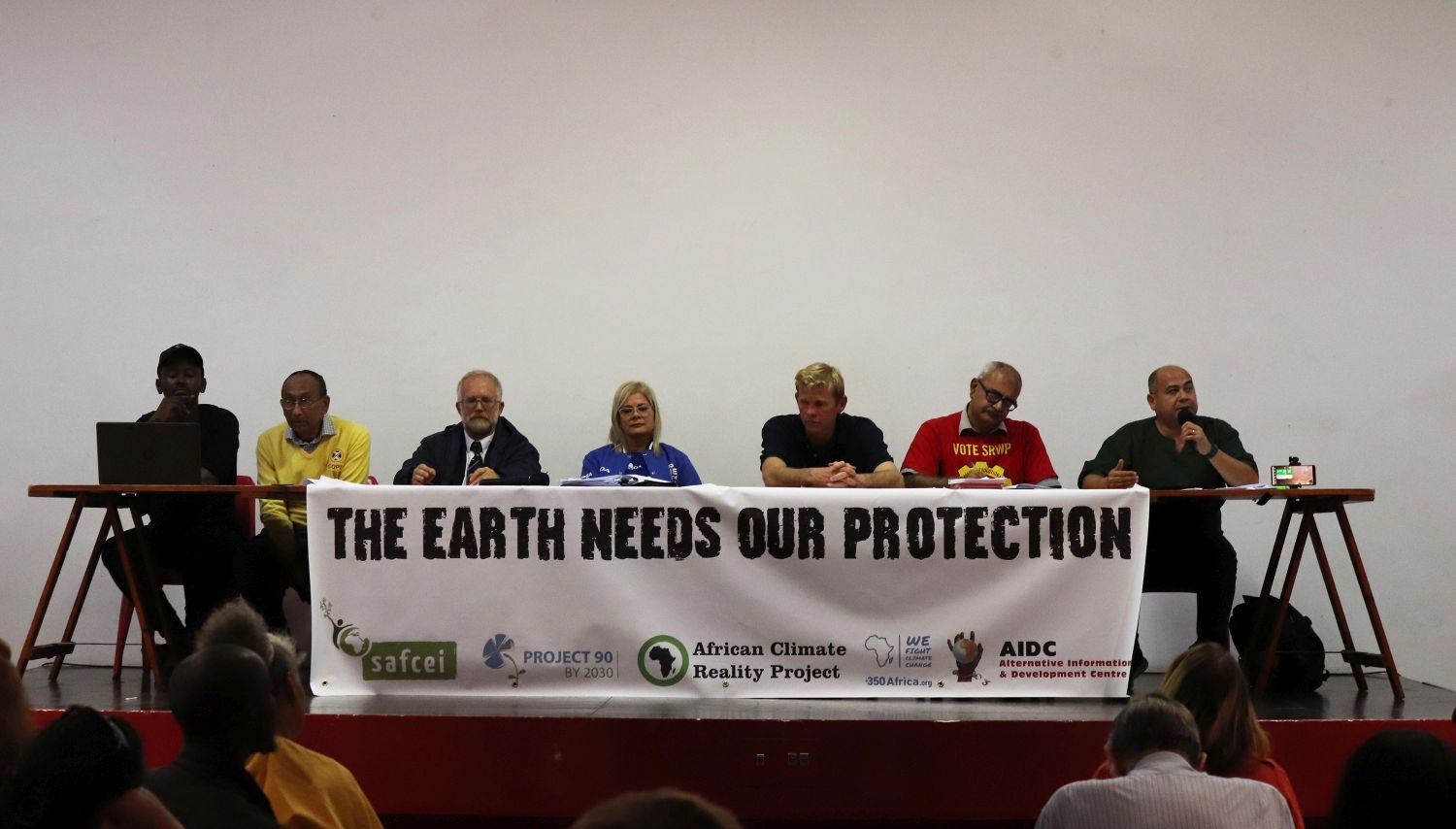