Pope Francis’s edict on climate is a big deal.

2014 was the hottest year on record.  Not afraid of political heat, Pope Francis, dubbed the `superman pope’, is m 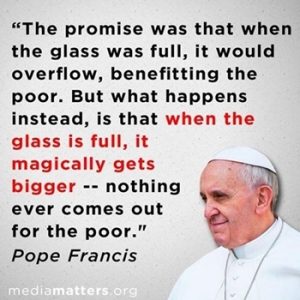 aking urgent action for Climate Change a priority in 2015.  He has long been aware of what he calls the human ecology impacts of our exploitative economic and financial systems.  “We are experiencing a moment of crisis; we see it in the environment, but mostly we see it in man.   And the danger is serious because the cause of the problem is not superficial, but profound: it’s not just a matter of economics, but of ethics.  The Church has stressed this several times; and many say: yes, that is true but the system continues as before…  (Catholic Climate Covenant)

Following from another weak outcome in 2014 at the Climate Change talks, he is taking decisive action to influence the climate talks scheduled for December in Paris. The spiritual leader of 1.2 billion Catholics has publically acknowledged that man’s activities are the prime cause of greenhouse gas emissions.  He is following his pronouncement with actions.  His office will be releasing an edict, or encyclical,on climate change and human ecology within the next few months.  Dan Misleh, director of the Catholic Climate Covenant, said:  “A papal encyclical is rare. It is among the highest levels of a pope’s authority. It’s a big deal.”  It aims to inform and to urge all Catholics to take action on moral and environmental grounds.  The world’s 5,000 Catholic bishops and 400,000 priests will each receive copies to present to their parishioners.

As well as lobbying politicians Pope Francis will also be holding discussions with other faith leaders during the year.  He will be calling for ethically driven change at both the UN General Assembly in New York in September, when countries are to sign up to new anti-poverty and environmental goals as well as at the Climate Talks (COP) in December. With all eyes on the crucial 2015 Climate Talks, which are meant to replace the Kyoto Protocol with stronger emission reduction targets, the climate denial lobby and the business as usual economists, including the fossil fuel industry, are expected to be even more determined to influence decision-making.  It is time to believe that their era is ending and the era of sustainable use of the earth’s resources is beginning.  Positive signs include:

President Barack Obama has acknowledged that climate change is a moral issue with most of the worst impacts affecting the poorest nations.

A bilateral agreement between China and the USA on national targets for CO2 emissions is a hopeful indication that the negotiation deadlocks with other nations can also be broken.

Significant advances in photovoltaics and other clean technologies are providing genuine alternatives to fossil fuel.

There is a growing campaign, worldwide, to disinvest in fossil fuel industries.

Millions of people around the world are waking up to their role in reducing greenhouse gas emissions.

While faith leaders are lobbying politicians for climate action, as Earth Keepers, we need to look more closely at which of our activities produce greenhouse gas.    Lent offers Christians a communal time to fast, to give up a bad habit, and take on new spiritual practices.  A Carbon Fast for Lent is being increasingly recognised as a way to commit to small but meaningful Earth Keeping actions. Lent starts on Ash Wednesday 18 February. Click on here for Carbon Fast ideas from the Green Anglicans.