Nuclear energy bad for state of our nation

“Never doubt that a small group of thoughtful, committed citizens can change the world; indeed, it’s the only thing that ever has.”  Add prayerful to thoughtful and Prof Margaret Mead’s oft used quote describes SAFCEI’s objective of shifting the South African government’s energy priorities from nuclear to renewables.  The dedicated Earth Keepers who hold anti-nuclear posters and hand out brochures outside parliament every 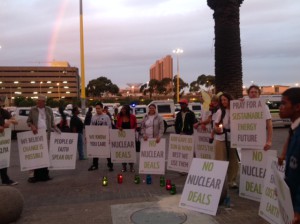 Wednesday find strength in their commitment to eco-justice and their understanding of the devastating environmental and economic consequences of nuclear energy.  The word is spreading as more people stop to ask questions and take an information brochure.  The nuclear vigil held on Cape Town’s Grand Parade just before the State of the Nation address captured the interest of media and officials on route to parliament.  Both News 24 and SABC Morning Live have recorded live interviews with Liz McDaid, SAFCEI’s energy advisor, and faith leaders at the nuclear vigils.

The invitation is open to all South African’s to support the nuclear vigils and to join the call to stop a meltdown of our democracy with the secretive purchase of outdated and unaffordable nuclear technology.  If you can’t come physically, then send your photo and anti-nuclear statement to SAFCEI’s Facebook page at: https://www.facebook.com/pages/Safcei/180511891988617

More than co-ordinating the nuclear vigils, SAFCEI has written numerous press releases, has written to the Ministers of Finance, Public Works and of Energy, and is taking legal action together with EarthLife Africa.  See details of actions below.  However, to grow the support and the impact of SAFCEI’s No to Nukes campaign, more is needed.  “To succeed in compelling the government to reverse its determination to expand atomic power will require a multi-pronged campaign of the same magnitude as the one that forced the government to reverse its policy of treating HIV/AIDS with beetroot instead of medicines. Civil society organisations and the Energy Intensive Users’ Group will need to team up to beef up the small environmentalist lobbies that oppose atomic power.” K. Gottschalk, professor in political science at the University of the Western Cape. Source: http://www.bdlive.co.za/opinion/2015/02/25/atomic-power-is-least-sensible-option

If you’re unsure about the risks of the government pursuing more nuclear as part of our energy mix, consider these quotes from SAFCEI members.

“SAFCEI believes that the people of this country will be impoverished by the proposed nuclear reactors. WHY are certain people so keen to compromise our sovereignty and embroil South Africans in complicated, risky, expensive, extremely-long-term contracts with another state, while keeping us from knowing anything about the ‘deal’.”SAFCEI Board member, Buddhist Ani Tsondru.

”This nuclear deal poses an enormous corruption risk. It is happening in secret and will make the arms deal look like a walk in the park.” SAFCEI’s vice chairperson, Moulana Riaz Simjee.

“What is not questioned is Eskom’s continued reliance on non-renewable sources of fuel such as coal, gas or nuclear to meet South Africa’s energy security needs.  We believe that blind inflexible adherence to nuclear energy will undermine energy security, which South Africa cannot afford.” Liziwe McDaid

“SAFCEI believes that the government’s current approach to energy infrastructure investment is outdated and that it is immoral to commit scarce public funds to propping up an energy system that can no longer serve the interests of the people of South Africa.” Sean Brown, Operations Director for SAFCEI.

SAFCEI has augmented their anti-nuke vigil by appointing legal counsel to demand accountable and transparent decision making by government officials as required by the legal framework and spirit of our constitution.

For a comprehensive background to the actions being taken by SAFCEI to encourage President Zuma and his government to rethink nuclear and to open up the investment opportunities for renewable energy, have a look at the links to articles and letters below.

Open letter from SAFCEI’s founding patron, Bishop Geoff Davies to South Africa’s finance minister the Hon. Nhlanhla Nene, 28th January 2015  “From an energy as well as financial perspective, we believe nuclear energy is going in the wrong direction. We encourage you to tell President Zuma – and Parliament – that our scarce financial resources should be prioritised for the empowerment of our people rather than nuclear energy.”  Read more at: https://safcei.org/dear-minister-nene/

Website Article: Support for Safcei’s SONA press statement.  “In recent lawyers’ letters to the Ministers of Energy, Public Enterprise and Finance, SAFCEI highlights that any nuclear procurement process based on the outdated electricity plan would be fatally flawed and irrational. SAFCEI’s lawyers argue that our legislative framework is incomplete and unsatisfactory.” Read more at: https://safcei.org/support-safceis-sona-press-statement/

Website Article: Stop nukes. Prevent democracy meltdown. “The prosperity of all South Africans is based on a democratic system true to the principles of listening to and meeting the real needs of the citizens and a national treasury that is accountable and funds these needs. Yet, right now, a nuclear programme valued in excess of R1 trillion is being promoted by President Zuma and negotiated by government officials and foreign business interests without a proper mandate from the National Development Plan or the Integrated Energy Plan (Draft).” Read more at: https://safcei.org/stop-nukes-prevent-democracy-meltdown/

Website Article: Appeal to minister over DoE’s refusal to reveal nuclear secrets. “SAFCEI has briefed the Open Democracy Advice Centre (ODAC) to assist with their request for access to information. SAFCEI had also asked for a copy of the authorisation given to the Minister to allow her to enter into a nuclear agreement.”  Read more at: https://safcei.org/appeal-minister-refusal-reveal-nuclear-secrets/

YouTube Video: Safcei’s board members at a Nuclear Vigil outside Parliament. https://www.youtube.com/watch?v=BObkyTaMt-w