Marching for the Climate

We have written a lot about the upcoming UN climate talks – COP21 – in Paris this year, but now that they are around the corner it is becoming more and more pressing to take action. 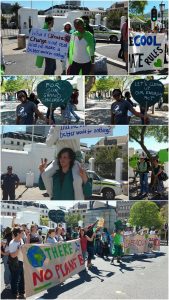 2015 is said to become the hottest year on record. In South Africa we have been feeling this as we seem to have skipped spring and jumped straight into summer on some of these last days. But not only is this year predicted to be the hottest since humankind started measuring temperatures some 130 odd years ago, the other contending years – 2014 and 2010 – took place in the last 5 years.

This has led to Faith leaders uniting and calling for action at the Parliament for World Religions. Muslim, Hindu, Christian, Jewish, Buddhist and Jain leaders joined together to pledge faith-based action to combat climate change.

This follows on from the Pope’s encyclical, Laudato Si, in which he spoke to the urgency of acting together and acting now on climate change, as well as the Islamic Declaration on Climate Change which calls on all Muslims to take an active role on combatting this crisis we are facing.

Things are hotting up in more ways than one and we need to continue this effort of urging our world leaders to come up with a new legally binding agreement on climate change that will also bring about the action we need.

A weekend of worldwide climate action has been called for the 28-29th November, which precedes the opening of the climate talks on the 30th November, to urge exactly this. Tens of thousands of people will be taking to the streets in climate marches being held on all the continents to show our leaders that we care deeply about climate justice.

Cape Town, Johannesburg, Gaborone, Harare, Nairobi, Arusha and Kampala will all be joining in this global movement. There will also be many other smaller solidarity events – visit the Global Climate March website to see whether there is one near you and your faith community which you can join.

SAFCEI, together with our faith leader puppets, will be joining the Cape Town Climate March taking place on Sunday 29th November. Marchers are asked to convene at 11am at the CPUT campus car park where a line-up of speakers and entertainment is planned before the march begins at 12pm. More information will be following soon; keep an eye on our Earth Keeper website.

But there are also many other initiatives around climate change that you and your faith community can easily support.