Learning from our campaign: How can we stop the nuclear deal forever?

Today – a panel discussion including faith leaders, community representatives, members of the public, and activists, who have been working to keep nuclear power out of the country, discussed the gains of the #StopSecretNukeDeal campaign, and plotted the way forward for the transition to a just energy future for all citizens of South Africa.

The High Court victory by the Southern African Faith Communities’ Environment Institute (SAFCEI), Earthlife Africa-Johannesburg and and their partners was a significant setback to those promoting new nuclear builds in our country. However, there is an urgent need for South Africa address the problem of nuclear waste from Koeberg and to make the transition toward a just energy future. There is also the need to work with, and learn from other social justice campaigns, that became the focal point of the discussion.

In her opening prayer, Ani Tsondru, a Buddhist nun who serves on the SAFCEI board, reminded attendees that “we need to work in community, because we are stronger together. This is how we were able to win the court case, by working together.”

Liziwe McDaid, eco-justice leader at SAFCEI says, “Through these various campaigns, we have learnt that it is vital to hold government accountable for its decisions and actions. While we have seen a change in the country’s leadership, some of the same people who have been pushing for corrupt nuclear deals still remain in their positions, while others have been rewarded with millions of Rands that should have been used to improve the lives of South Africans.”

Liziwe McDaid, ethical governance lead for SAFCEI says, “Through these various campaigns, we have learnt that it is vital to hold government accountable for its decisions and actions.”

Faith leader and community activist, Neville Van Rooy, from the Karoo Environmental Justice Movement (KEJM) – who are fighting ongoing attempts at uranium mining and fracking in the region – says, “When we first heard about government’s intentions to do fracking in the Karoo, we didn’t have any idea what it was. We had to educate ourselves, and fast, in order to protect our communities. As emerging, small-scale farmers the attempts to mine uranium and shale gas is a direct threat to our livelihoods, particularly our delicate underground water resources. It was not government who kept us informed, but it was through the anti-nuclear campaign.” 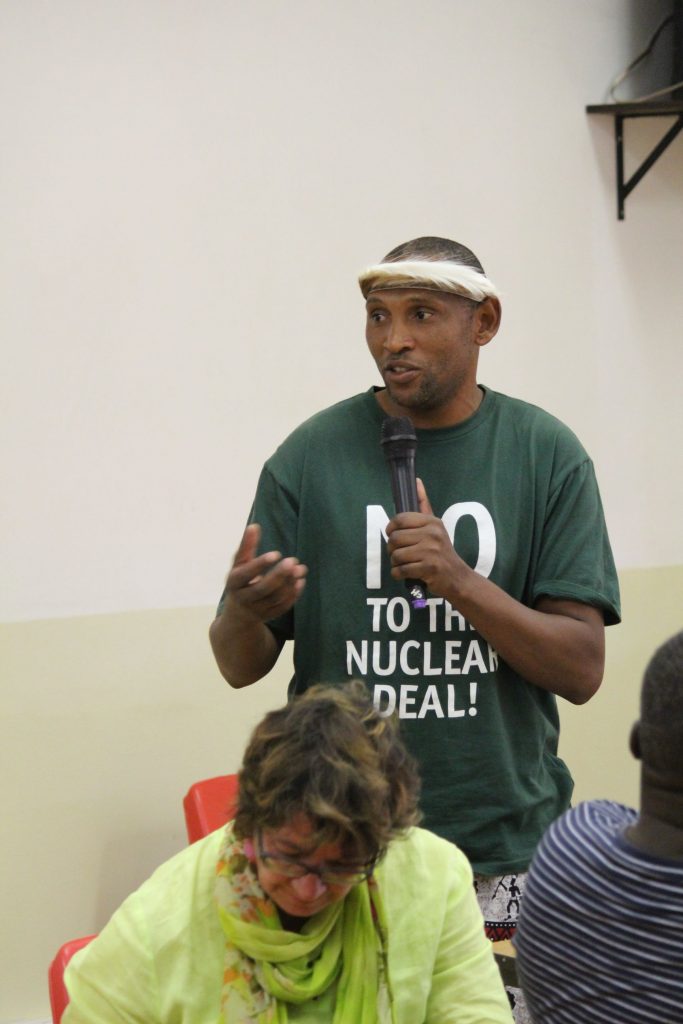 Faith leader and community activist, Neville Van Rooy, from the Karoo Environmental Justice Movement (KEJM) shared more about the struggle of emerging, small-scale farmers who continue to fight the attempts to mine uranium and shale gas – a direct threat to their livelihoods, particularly our delicate underground water resources.

Andy Pienaar, who represented the Kommagas Action Group in the Northern Cape –where the nuclear waste site, Vaalputs, is situated – says, “Our communities in Namaqualand are interested to know more about these issues, since it directly affects us. This campaign has taken the wool off our eyes and has helped us become more aware of the associated risks, particularly to our groundwater systems, which we all rely on. Our communities were not involved in the decision to create the nuclear dump site here. What stops government from bringing high-level waste here as well? It is therefore important that we continue the struggle against nuclear, which is endangering the lives of many South Africans.”

Peter Becker of the Koeberg Alert Alliance, reminded attendees that the anti-nuclear campaign is not only about stopping the new nuclear deal, but is about something much bigger. With regard to the need for nuclear power in South Africa, Becker pointed out that at the moment Koeberg is producing only 2 to 3% of electricity in the country, and so South Africa could easily do without Koeberg.

He says, “It is widely accepted that plans for a new nuclear build are unaffordable and impractical, but we need to continue to be vigilant to make sure it doesn’t go ahead. Aside from that, what do we really know about the Koeberg nuclear plant? There a several questions we should be asking. How many of us know how much high-level radioactive waste is currently being stored at Koeberg Power Station or what the associated risks are? And how much is being added each year? How will this waste be disposed of and kept safe for the thousands of years it remains dangerous? What government body is responsible for ensuring this is done safely?” 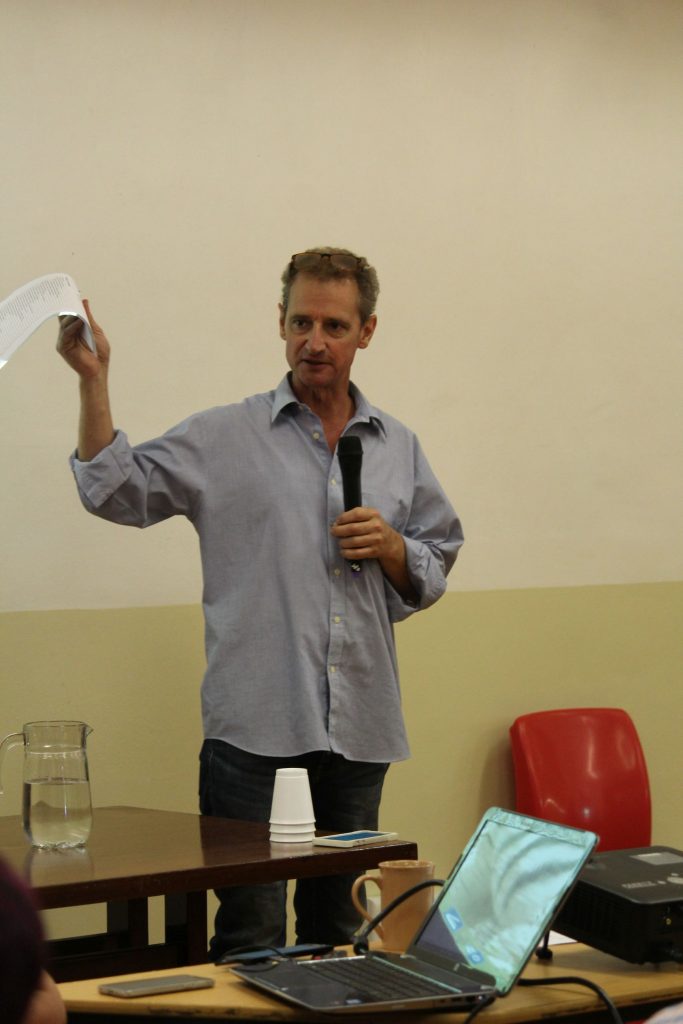 Peter Becker of the Koeberg Alert Alliance, reminded attendees that the anti-nuclear campaign is not only about stopping the new nuclear deal, but something much bigger, such as the risks associated with the storage of large quantities of high-level waste being stored at Koeberg Power Station.

Continues Becker, “How many incidents have there been at Koeberg, accidentally exposing workers to radiation? And at Pelindaba? The National Nuclear Regulator has been obstructing our access to these incident reports for some reason, which raises suspicion.”

Open Secrets’ Hennie Van Vuuren – which recently held a People’s Tribunal on Economic Crime in SA, in relation to the corruption in the arms trade over the past 40 years says that he is inspired at how the campaign has developed. He says, “The campaign to challenge nuclear deals has a lot in common with the Arms Deal. The powerful rely on secrecy and closed processes, designed to exclude the people. Thus far we have stopped a corrupt nuclear deal – but the struggle is far from won.”

Biko Matswaura from the Right2Know Campaign also related learnings from its SASSA campaign to that of the anti-nuclear.

This time of year also commemorates the anniversaries of a number of very significant nuclear disaster events in world history – the accident at Three Mile Island (1979) that led to a re-evaluation of nuclear safety regulations, while the Chernobyl (1986) and Fukushima disasters (2011) continue to provide convincing evidence years on, that nuclear is too dangerous and too costly a technology to invest in.

Following today’s discussion, the participants resolved to continue community advocacy including educational material to help prepare South Africans to meaningfully participate in future energy decisions- where their voices and choices should be heard.

We want to motivate the government to ensure transparent and ethical decision-making, and to move towards an energy future for all citizens that is affordable for our pockets and reduces our fossil fuel dependency. We need to revitalise the country’s energy planning and this means that we must re-evaluate our current, out-dated energy policies – which do not take into account the strides that have been made in renewable energy technologies.