Kenya dispatches 21 of its cyclists tomorrow 1st November for Busia, 450km from the capital city. Their mission is to link up with Uganda cyclists and together ride back to Nairobi for the We Have Faith Act Now Climate Justice Campaign climax.

Uganda cyclists will ride some 197km from Kampala to Busia. 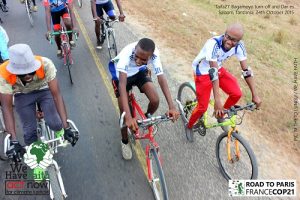 Meanwhile Tanzania will be getting on its second phase from Dar es Salaam to Namanga border with Kenya, some 813km.

Tanzania will camp at Mbezi Garden on 2nd November before starting off earliest by 6am from Dar es Salaam on 3rd for Msata. The ‘Taifa21’ will then proceed to make stops at Msata, Korogwe, Same, Moshi Town where a climate justice concert is expected, before proceeding to Arusha.

From Arusha on 9th November the cyclists, that include one female, Esther Joshua, will handover to the Kenyan team of cyclists at the Namanga Border Control.

A national elections break took place and the team proceeds with the pan-African cycling campaign Tuesday.

Involving 9 countries, the cycling campaign has been from Mozambique in August and passed through South Africa, Botswana, Zimbabwe, Zambia joining to Malawi on 8th October 2015.

Uganda team will cycle from Kampala to Nairobi and link up with the Kenyan team that is set to be dispatched to meet the Tanzanian team at Namanga.

The campaign is part of the bigger global movement that is calling for a fair and legally binding agreement at COP21 in Paris this December, where world leaders will meet to discuss a lasting position on climate change.

Experts say the world cannot withstand any more global warming above 1.5 degrees and world leaders must make decisive decision to save the planet, after the Kyoto Protocol fail short of holding nations to check in management of emissions and rising temperatures, bringing more environmental chaos in poor African countries.

Faith leaders and communities, youth groups, and other stakeholders formulate the campaign, which has been to seven main cities so far and collected signatures for the African People’s Petition, in the process engaging local communities, leaders and other groups in one of Africa’s biggest and ambitious climate justice advocacy campaign of all time.

It has covered approximately 5,200km of the entire 6,500km in 50days out of the planned 70 days of the cycling expedition.