In Honour of the Honeybee

Honey has a special significance in most religions. In our household on Maundy Thursday we would celebrate with a very simple supper that consisted of fresh bread, grapes, salt and honey. We would sit by candlelight and nothing tasted sweeter than that honey on fresh bread.

That sweetness has long been recognised as something special and desired, which is revealed in these words that appear both in the Torah and the Bible: “And I have come down to deliver them out of the hand of the Egyptians and to bring them up out of that land to a good and broad land, a land flowing with milk and honey” (Exodus 3:8). 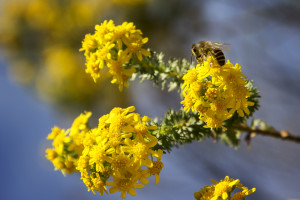 Honey is part of many ceremonies the world over. As part of the Hindu welcoming ceremony for a baby, known as Jatakarma, honey is placed in the child’s mouth. The ceremony is meant to impart certain values and arouse all of the child’s senses. Some of the Hindu gods are also closely associated with honey and the bee: Krishna is sometimes depicted as a bee. The Srimad Bhagavatam contains this beautiful verse: “O my Lord Kṛṣṇa, I beg to offer my prayers unto You. My mind is like the bee, and it is after some honey. Kindly, therefore, give my bee-mind a place at Your lotus feet, which are the resources for all transcendental honey.” (SB 1.11.26)

But honey is not only a sweet treat and considered to be part of a wholesome diet, it also has medicinal properties which the Qur’an speaks on. “And thy Lord taught the bee to build its cells in hills, on trees and in people’s habitations… there issues from within their bodies a drink of varying colours, wherein is healing for humankind.  Verily in this is a Sign for those who give thought.”

To produce this honey that we all benefit from, whether by enjoying it on a slice of bread or in our honey ginger tea to soothe our throats, bees travel many thousands of kilometres. A single honeybee produces about a twelfth of a teaspoon of honey in its lifetime and to produce a kilogram of honey a colony of bees will travel the equivalent of three orbits around the earth. It therefore seems more than appropriate to have a day set aside for these industrious creatures: National Honeybee Day is celebrated on the 22nd of August.

However we often forget that it is not only the honey that the bees make that is so precious; their pollination of many food crops is where their real contribution to the well-being of humans lies. If bees were to be taken out of the eco-system, a third of all the food we consume would disappear too. If nothing else makes the world sit up and take notice, this should make the decline in bee populations around the world a matter of great concern. We depend on bees for surprising crops like onions, cucumbers, pumpkins, beans, sweet potatoes, cabbage and cauliflower – not to mention the many fruits like pears, apples, all kinds of berries, plums and peaches.

This is a very visible example of how interconnected our world is; that we depend on the health of all that is around us for our own well-being. Thinking about this interconnectedness reminds me of the words of Chief Seattle, a man whose words already touched me many years ago.

These words, though said more than 150 years ago, couldn’t be more relevant as we face a myriad of environmental issues today, the plight of the honeybee being just one. However this recognition can also be positive if we can mobilise our communities with this acknowledgment that everything we do has an effect, the negative as well as the positive. And we can take another valuable lesson from the honeybee itself: though a single bee’s contribution may look insignificant, as part of and together with the whole, it achieves a great deal.

The dying off of bees – yearly losses calculated to be around 30% – has been linked to more than one factor. In the US and Europe the varroa mite, pesticides – especially the class known as neonicotinoids – and habitat loss are the main causes. In South Africa a bacterium known as American Foul Brood is a big contributor. It is also the interaction of all of these that is the problem: the effect of pesticides coupled with nectar scarcity as well as less nectar variety is weakening them and makes them that much more susceptible to the mites or bacterium.

Whilst there is no easy solution to address any of these, there are some things that we as Earth Keepers can do: