God gave us sun and wind – Best we use them! 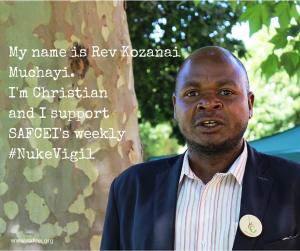 All around us, everyday, nature shows us uncountable examples of how to use the earth’s energy efficiently and sustainably.  Our advances in harnessing the wind, water, solar and bio-thermal energy have scaled up the capture of these energy sources so that today we can use nature’s energy to power our lives. That is, if, our lifestyles are not based on over consumption.  Technologically we now have the ability to step away from the outdated model of large, centralised, environmentally damaging power generation.

In spite of this, the South African government is signing nuclear power agreements with Russia and France et al. Nuclear power entrenches the production of environmentally dangerous and economically exorbitant centralized power generation.  Sadly it would appear that our decision-makers do not have the courage to implement meaningful change to promote energy efficiency. Neither do they have the vision to insist on a roll out of renewable energy options which offer power and employment to the people. “The high consumption, nuclear path may appear easier for government to pursue in the short term, but we believe that there is a moral duty to follow a more challenging and a sustainable option.“  Christian Ecology

“For over 50 years, nuclear power stations have produced three products which only a lunatic could want: bomb-explosive plutonium, lethal radioactive waste and electricity so dear it has to be heavily subsidised. They leave to future generations the task, and most of the costs, of making safe sites that have been polluted half-way to eternity.” James Buchan

People of faith need to work together to educate and inspire the public to use their power as consumers and citizens to call for a healthy energy future for all on our planet.  The National Church Leaders’ Consultation (NCLC) gathering from 22-23th October 2014 reflected on being the Church in South Africa today and the challenges as we celebrate 20 years of democracy.  They recognised the conflict between energy and ecology and specifically the concern that  ”nuclear energy and fracking are not environmentally responsible and may destroy the living chances of future generations”.

SAFCEI has sent out a call for faith communities to pray for a sustainable energy future. 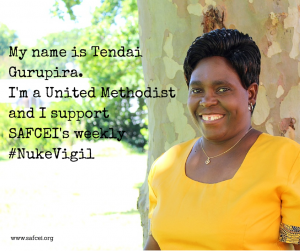 When: Every Wednesday morning between 7.30 & 9.00
Where: Outside Parliament, Cnr. Roeland & Parliament Street, Cape Town
Posters, badges, solar jars and candles will be provided by a SAFCEI volunteer.
Wear religious attire if appropriate or an Earth Keeper T-shirt.

We believe in the power of silent, prayerful protest. Our quiet presence can make a lot of noise.  As people of faith we make a bold statement about our moral responsibility to care for all life.  Photo of SAFCEI members Bishop Geoff Davies, Kate Davies and Rameez Flowers outside parliament in Cape Town on 22 October 2014.  Rameez also represents the Muslims for Eco-Justice.  They believe that nuclear power is an unjust burden on future generations and a lost opportunity ito the job creation and green economic growth that a similar investment in renewable energy would offer.

Please take photos or film short video clips and mail them to sarah@safcei.org.za or post them on Twitter including @Safcei and hashtag #NukeVigil .  If you are planning future actions please let us know.

1 Nuclear energy was identified in South Africa’s Integrated Resource Plan of 2010 – 2030 as an option in our energy mix for the longer term.  The IRP is in the process of being updated, but in their haste to sign nuclear procurement deals, the government did not wait for the update where the nuclear could be debated openly in this forum.

2 Nuclear energy is exorbitantly expensive and is not viable without extensive government subsidies.  At the same time the rapidly reducing costs of both solar and wind energy means that these renewable options are cheaper per kWh than nuclear energy. Wind energy is already cheaper than the predicted kWh costs from the new coal fired plants.

3 Nuclear energy is an inflexible base-load partner for renewable energy generation.  Nuclear plants can’t be switched on or off at short notice to correspond with the peaks of production of solar and wind energy.  This inflexibility of nuclear will result in inflated electricity costs.

4 The Finance Minister, Nhlanhla Nene, told the media before his medium-term budget speech in Parliament on 22 October 2014 that the country’s proposed nuclear build would not feature in budget provisions in the near future.  “At the moment, we have not actually reached that point where nuclear is at a point where we would be able to deal with it in the medium-term budget policy statement, or in the budget.”  In view of the behind door dealings of government representatives with potential overseas nuclear partners, the finance minister’s statement is not reassuring.

5 The behind doors dealings regarding the proposed new nuclear programme has caused large scale and wide spread criticism of the government.  At this stage the government seems to be ignoring the calls both to provide information about what they have signed with the nuclear industry and to rescind their minority view that nuclear should be included in our energy mix.  This raises very worrying questions about accountability, justice and democracy.

6 A recent emergency practice to test the response of the Koeberg staff and the City of Cape Town Disaster Risk Management team to a nuclear disaster revealed that the city does not currently have the ability or resources to protect its citizens.  This is a major concern right now, but it also raises the question of how citizens would be protected from incidents at any of the proposed new nuclear plants if they were ever to be constructed? 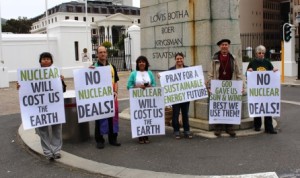