COP 21 is just around the corner and there is much activity around climate action, including in the courts. With this ruling, the Dutch court has shown that governments have an obligation towards their citizens regarding climate change: it is their responsibility to protect their citizens through taking protective measures. As the Guardian reported:

“A court in The Hague has ordered the Dutch government to cut its emissions by at least 25% within five years, in a landmark ruling expected to cause ripples around the world.

To cheers and hoots from climate campaigners in court, three judges ruled that government plans to cut emissions by just 14-17% compared to 1990 levels by 2020 were unlawful, given the scale of the threat posed by climate change.

Jubilant campaigners said that governments preparing for the Paris climate summit later this year would now need to look over their shoulders for civil rights era-style legal challenges where emissions-cutting pledges are inadequate.

“Before this judgement, the only legal obligations on states were those they agreed among themselves in international treaties,” said Dennis van Berkel, legal counsel for Urgenda, the group that brought the suit.

“This is the first a time a court has determined that states have an independent legal obligation towards their citizens. That must inform the reduction commitments in Paris because if it doesn’t, they can expect pressure from courts in their own jurisdictions.” 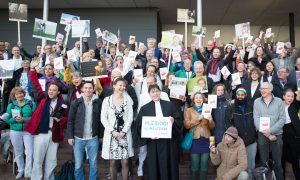