If nature is the beginning, what is the end? What are we doing to our fresh water?
By Lydia Mogano 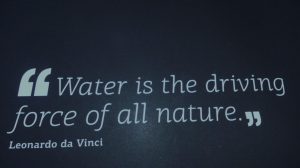 I’ve never ever thought that we would one day talk about a water mix! I was absolutely shocked when I heard this term hydraulic mix in the context of climate change adaptation. This made me think that nations are only dressing the wounds and are not tackling the root cause of climate change.

I understand that my country and other parts of the world are experiencing tight water scarcity. But to think of failing to preserve water in its natural form (e.g. refining waste water through chemicals) and trading to other countries that struggle with access to clean water makes me wonder how blind we are.

Yes, it is possible to recycle water, but the water would have lost its natural value. What doesn’t sit well with me is that this water mix would be regarded as a common business as usual in the future because of climate change impacts. In other words, most of the water we would be drinking would contain more chemicals.

Imagine how much would the cost of water be over time? Can’t we just appreciate and enjoy water in its purest form and still have it affordable and affordable to everyone? We need to reduce or eradicate high intensive use of water in our communities and refrain from energy generation models that compromise the integrity of our fresh water tables (e.g., fracking and uranium mining).

Mitigation and water are closely linked. How? Waste waters emit gases especially in densely populated areas. The speakers are proposing that renewable energy such as methane from the same waste can be reused. Bio gas can assist in mitigation but at the same time, the greatest challenge is to ensure good water quality.

Hydroelectric powers are no longer given any attention in France. Why? This type of energy could be increased in Africa, India and Asia but not in France.  France has used all technical and environmental potential to use hydro. However, France has instead increased the capacity of farmers to use and redistribute water wisely and then they can use their waste for good farming.

It’s up to developed countries to support emerging countries and use multilateral partnerships (and this relations work well with technical unions). Water treatment as in biomass can be used for fertilisers, and short cycle methane for heating. Europe can reuse treated water in water scarce countries, especially in the south.

The relationship between adaptation and water is also important because the water sector is impacted by several sectors and adaptation is a priority as opposed to many countries. Adaptation is critical for both the north and south. For instance, 92% of INDC submissions mentioned adaptation and water as a priority. They helped us in drawing our attention to adaptation and now we need to focus more on financial commitments. Therefore, it is essential for governments and business to work with local communities to strengthen resilience. This process becomes possible when access to food and education are taken into consideration.

IPCC called for mitigation and adaptation of territories and this was seen as giving up on mitigation. Nonetheless, thanks to the south, that adaptation is back on the agenda. E.g., flood disasters happen in New Orleans. You cannot talk of resilience without also questioning land development and without putting social issues at the core of climate change.

Today we saw that the whole morning was devoted to resilience! So adaptation is central to the debate. What would be critical is determining how to monitor and assess risk together. For instance, the North and South interactions need to apply methods that combat drought (e.g., controlling use of ground water tables). Just as we talk of an energy mix, the speakers were stressing that we need to talk of water mix and that there is technology available to make this possible.

Regional adaptation – Copenhagen can teach us something in the early 1990s. Innovation is essential when it comes to putting people in the centre. This involves having non-resident existing models that allows people to shape these processes

Most rural communities will suffer from waste water and damage to land such as wetlands. We need to consider nature, however, any strategy that incorporates nature is a good way to start but not always sufficient. We need to learn from mistakes and successes and make sure that we don’t repeat the same mistakes!

Q&A: (SAFCEI) water is the very source of all life on earth (including that of our own) and water has intrinsic values. If nature is the beginning, what is the end?

No one was willing to answer my question because the speakers tossed the mic until one of them was compelled to answer my question. In response, he said that people are always sceptical about modifying landscapes. We are confident to let nature finish the cleaning process. We trust in nature to do so. There is complementarity between adaptation and technology. I am very convinced that he has not answered my question and I think that is the million dollar question that humanity will struggle to answer even though we think we know the answer.

Minister of Palestine Shaddad Attili, in conclusion, went on to emphasize that good governance of water is essential and access to water, sanitation and reuse of water comes first. Countries of the south were not really thinking of climate change but they are affected by climate change. Arab countries don’t have enough water, while Paris is very privileged. He is now crossing fingers that there will be a binding agreement in Paris to end this misery. In order for this process to succeed, transfer of knowledge is essential.