By M’thetho Lungu
4th October 2015. Lusaka, ZAMBIA.
One good turn deserves another. Zambia’s core cyclist, Allen ‘Super1 Chipolopolo’ Namukamba, says he from the exeprience he is having in the pan-African We Have Faith Act Now for Climate Justice Campaign, he will start a cycling club that will ride for climate change awareness during competitions and around his community! 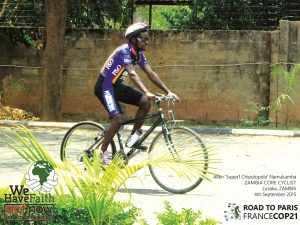 A former charcoal producer and vendor, Allen says his dreams to advance his engagement in the protection of trees and the environment will probably come true when he returns from Chipata and arrives home in Lisitu.
He targets about 72 villages in Munenga.
“I am so excited about this campaign. When I transformed and started to assist forestry officials in my community in spreading the word against wanton and careless cutting down of trees, I did not have any idea someday I would be headed for greater interventions,” he told WHF Media and Communications.
“I plan to return home and raise more money through my vegetable garden and welding, and bicycle fixing skills to buy a better bicycle. With the old bike I already have on this tour plus the one I already have home and the other the WHF has purchased for me, I will have at least four bicycles by which to start the club,” he explains, excited at the green idea.
Married with three children and also keeping two more from his late uncle, Allen says nothing can come in between him and his dreams.
“When God plans something for you, no matter what you do to stop or forget it, it will happen. I am sure God has plans for me in this direction. We have serious environmental challenges in our area and Chirundu. I also want to be able to cycle further from home, including across borders into Malawi or Zambia to raise awareness and resources for this plan,” he adds.
Allen uses some of his spare time on temporal jobs, such as assembling bicycles for business people at Chirundu. In 2003 each assembled bicycle fetched him ZK15. For that amount, he says, it would be easy to raise for a ZK5,000 worth sports road racing bicyle.
“With this plus what I will make from vegetable sales, the sky is the limit. It is time I did more to help my community and Zambia in this greater cause. I did not know that people out here are doing a lot in the name of climate change. I am impressed, the prayers at the Anglican Cathedral of the Holy Cross, the faith leaders from different congregations, the youth, and everyone. I cannot sit aside and watch. I also want to make my contribution in my own way. No matter how small!”
Allen adds that it was his late father who, at the age of 14, put him on his first bike to start riding. He used to ride competitive sport in Mazabuka, where he used to work as a copy typist at the Mazabuka Golf Club.
“He taught me how to ride and also how to fix bicycles. He was a great rider and my hero. I also want to thank the white man, Mr. Lainer Human, who gave me the bicycle I used from Kariba to Lusaka in 2010 after he saw my potential in cycling. It is my favorite and I am indebted to him and everybody’s generosity.” Mr. Human is still stays in Kariba where he runs businesses raising crocodiles, and owns Kapenta fish rigs.
On Monday at 08am, Allen will be joined by the Twin Palm Bike Club as the Zambian leg of the campaign heads to the border with Malawi, where several ‘green’ activities are lined up in Chipata on 7th before crossing the boundary and handing over the baton over to Malawi and its set of cyclists on 8th October.