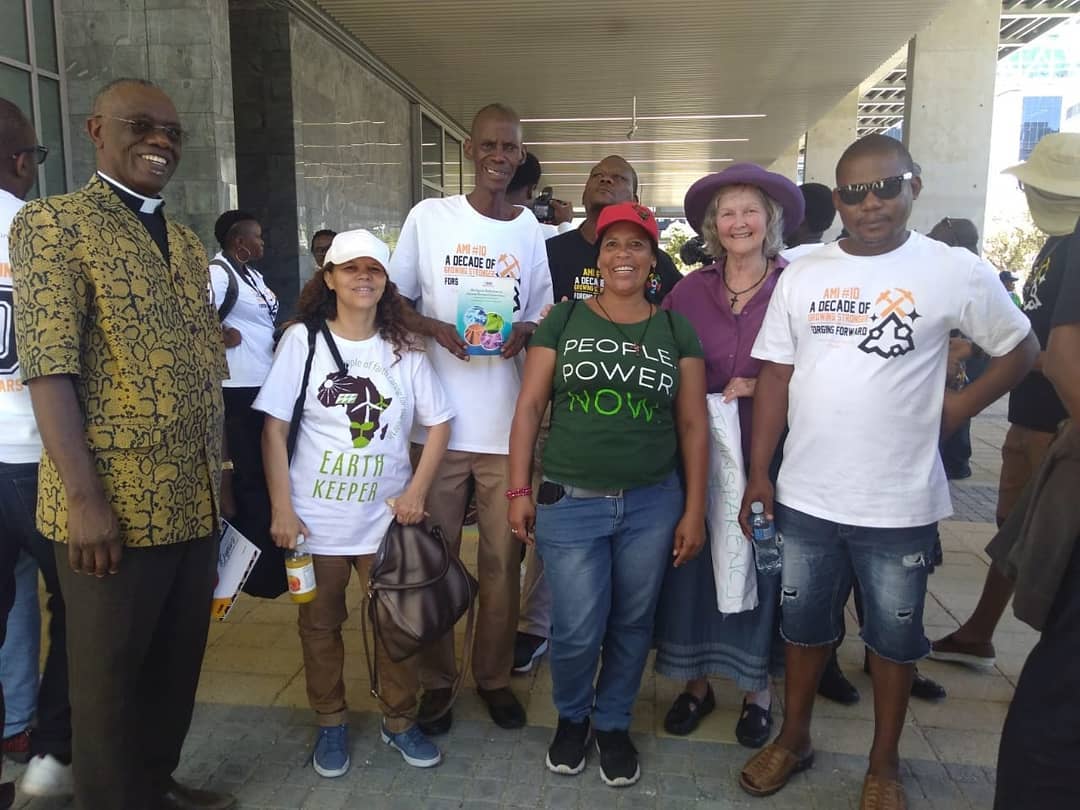 The West Coast Food Sovereignty and Solidarity Forum and the communities of Koekenaap and Lutzville on the West Coast are protesting tomorrow at a meeting between Minister of Mineral Resources, Gwede Mantashe and a mining company, Mineral Sands Resources (MSR) because of their plans to expand mining along the West Coast without any consultation.

Despite not honouring the past commitments when it applied to mine more than 15kms of coastline, Mineral Sands Resources (MSR) – a South African subsidiary of Australia’s Mineral Commodities Resources (MCR) – wants permission to mine up to ten additional beaches. MSR is the same company trying to mine titanium on the Wild Coast at Xolobeni, where the community sought legal action last year in a landmark case on their #RightToSayNO to mining.

According to Davine Cloete, Chairperson of the West Coast Food Sovereignty and Solidarity Forum, the biggest problem is that MSR purposefully side-step communities, so that they do not have to deal with their issues. Despite numerous efforts to engage the mining company and the South African government on this issue since 2015, both the government and the mining company have ignored their concerns.

Says Cloete, “We were promised jobs and development in the community, but instead they brought workers from outside, including from Xolobeni. The social and labour plans were not made available to us, and what we’ve heard about it, does not seem like it will benefit the community in any substantial way. But, in the face of unscrupulous mining corporates and an apathetic government, our communities are standing together and will not allow the division that they are trying to create.”

“By coming to meet with MSR instead of the affected communities, Minister Mantashe is sending a clear message, once again, that government is not concerned with what the people want or need on the ground. As it is, the government has not played any meaningful role in resolving our issues with MSR,” says Cloete. The West Coast Food Sovereignty and Solidarity Forum met with three communities today, in preparation for the protest action tomorrow – which takes place at 9am, in front of the Uitkyk Lutzville Community Hall (the venue for Minister Mantashe’s meeting with MSR Tormin mine.)

These communities are experiencing first-hand the impacts of living in a mining area. Surrounding fishing communities have reported that they are no longer able to find any fish on the coastline. And as a result of the growing sand piles at local mine dumps, the area’s agricultural activities are also severely affected. “And since they don’t want to reveal the radiation levels, we can’t say exactly how dangerous this is for our people or our crops. Yet, these and numerous other environmental violations continue to be ignored,” says Cloete.

This week, mining companies are meeting with President Ramaphosa and Minister Mantashe at the annual Mining Indaba in Cape Town. While the Economic Justice Network (EJN) co-hosted the 10th Alternative Mining Indaba (AMI). AMI brings together affected communities and faith leadership to discuss the impacts of mining on their communities. Bukelwa Voko from EJN says, “Civil society need more platforms to address their concerns, since it provides otherwise distant communities with the chance to share information, identify the similarities in their struggles and work toward finding ethical and just solutions for all.”

Vainola Makan, Energy Justice Coordinator at the Southern African Faith Communities’ Environment Institute (SAFCEI) says, “We note, with dismay, that there is a trend in government to promote the interest of foreign mining companies at the expense of South African citizens’ right to dignity, through meaningful public participation – which is enshrined in our Constitution.”

Cloete says that “MSR cannot continue to ignore our suffering and just go on with business as usual. What about those MSR employees who were suspended once they joined the union? They are suffering in the community. These are all reasons why Minister Mantashe should have come to the community, to find out whether the mine is doing right by us. There is also an urgent need to address the issue of unethical local politicians, who intentionally misinform the people and block community engagement.”

According to Nonhle Mbuthuma of the Amadiba Crisis Committee from Xolobeni who was the opening keynote speaker at the AMI, there are a number of similarities in the issues experienced on the West Coast and what is happening in Xolobeni. When the mining companies want the licenses, they make all kinds of promises of upliftment opportunities. However, in reality, not only do they not deliver on their promises, but they end up destroying the lives of whole communities.

“The people in those areas are now worse off than they were before the mines came. They are living in poverty now. They can’t farm the land, nor can they find any fish in the ocean. This is why we continue to fight for our #RightToSayNO to mining,” says Mbuthuma.

She adds, “If there is any chance for a mining project to work, government must put human rights first. This means that they have to work together with the people, and not treat us like slaves who have no say in what happens to us. What government is doing now, is taking the power from the people and giving it to the mining companies.”

“Furthermore, it is sad for me, that President Ramaphosa says that mining is in a sunrise phase, when so many people are dying as a result of mining. Think about the thousands of people dying from silicosis and other diseases, or those communities who had every natural resource stripped from them. No, mining is in a sunset phase, even if corporates and politicians do not want to admit it,” says Mbuthuma.

For more information about the protest action on the West Coast, contact Davine Cloete on 071-592-2361.

Issued by Natasha Adonis, on behalf of SAFCEI. For more information, contact Natasha on 0797-999-654 or Natasha@safcei.org.za

·         West Coast Food Sovereignty and Solidarity Forum formed in 2016 – in an attempt to engage with the mine on behalf of the community.

·         In 2015, the Forum and the communities it supports held a march and handed over a memorandum to Zamile Qwanya, the Mine Director and shareholder (and from Xolobeni) – who promised to respond, but up to now, has not. Cloete says that Qwanya brings in workers from Xolobeni – some of whom are deliberately causing conflict in the West Coast communities – to work at the mine.

·         Cloete is also facing a SLAP suit – along with 8 others, including local journalists – of R7 500 000 from MSR Tormin mine company, for defamation of character. Their cases will be heard in the High Court.