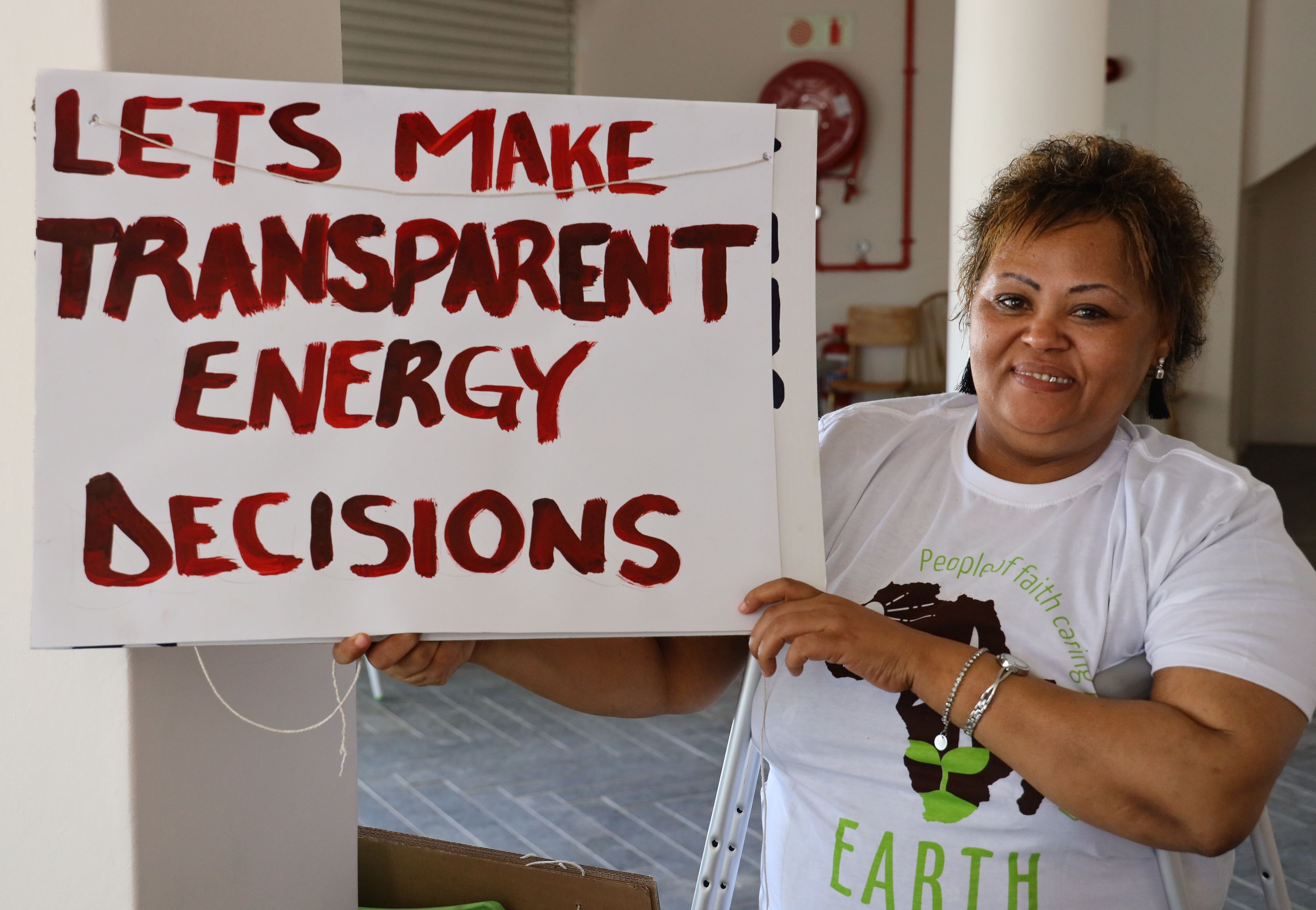 On Monday (14 January), the Southern African Faith Communities’ Environment Institute (SAFCEI) – along with faith and community leaders, and other partners – will present its arguments to the National Energy Regulator (NERSA), opposing Eskom’s proposed tariff increases. Eskom is requesting an electricity price hike of 15% for 2019, with a projected overall increase of 45% to 2021.

Vainola Makan, SAFCEI’s Energy and Climate Justice Campaign Coordinator, says “If granted, this price increase will severely impact all consumers of electricity across the country, many of whom are already struggling to pay their daily bills. Communities should not have to bear the brunt of the energy increases every year, particularly since Eskom management does not seem committed to recovering the mismanaged funds.”

“Nationwide load-shedding is still a reality for South Africans, highlighting once again the urgent need for restructuring and improved management of Eskom. With so many citizens still struggling for justice when it comes to their access to electricity, it is concerning that Eskom does not seem to be thinking about the country’s energy future in a rational or sustainable way. The SOE does not seem to have the public’s interests at heart,” says Makan.

SAFCEI is objecting to Eskom’s application as it is based on an inflated demand projection, which is out of touch with consumption trends. And, Eskom’s focus seems to be on managing their debt, rather than curbing escalating operational costs caused by poor management. SAFCEI – the multi-faith NGO which played a crucial role in stopping government’s secret and illegal nuclear deal – also rejects the 2017/18 RCA application in its entirety.

SAFCEI’s Eco-Justice Lead, Liz McDaid says, “Raising electricity prices to enable Eskom to continue to operate its fleet in an inefficient manner, not only puts a heavy burden on the poor and vulnerable. Increased electricity prices also impacts businesses, particularly small ones. Not sensible in an economy that is not growing.”

SAFCEI believes that ethical custodianship of the Earth’s resources is essential to sustainable development, and urges NERSA to operate on a value-based system that places economic and social justice for all citizens at the forefront of its agenda.

“Furthermore, SAFCEI calls on NERSA to conduct its own research, and to commission or produce an independent report – which should be made available for public comment – with recommendations for the restructuring of Eskom. Eskom’s role should be refocused to ensure that it promotes the shift to clean energy solutions. The reskilling of workers should be a primary focus, since this will ensure that our transition from dirty, high-risk energy to clean, renewable energy is just and serves the public’s interest,” concludes McDaid.

According to McDaid, there a number of other issues regarding Eskom’s price hike applications to NERSA that need to be interrogated. These include:

The Western Cape public hearings will take place on 14 January from 9am – 5pm at the Southern Sun Cape Sun, 23 Strand Street, Cape Town, 8000. For access to SAFCEI’s submissions, go to www.safcei.org.

Follow the link or see attached document for details on the public hearings in other provinces: http://www.nersa.org.za/ShowFilterDocuments.aspx?Category=All&SubCategory=Public+Hearing+Notices&PageId=223)

Issued by Natasha Adonis, on behalf of the Southern African Faith Communities’ Environment Institute (SAFCEI). For more information, contact Natasha on 0797-999-654 (also on WhatsApp) or natasha@safcei.org.za.