Yesterday, on the eve of the Finance Minister’s mid-term budget speech, the Stop the Secret Nuke Deal campaign and the Campaign for a Just Energy Future – supported by more than twenty civil and faith organisations – sent a letter to the Portfolio Committee on Energy (PCE) (which can be viewed here), to demand the public hearings that are required before any progress can be made on a nuclear deal and which have not yet happened.

According to Liziwe McDaid, spokesperson for SAFCEI and the Stop the Secret Nuke Deal campaign, the recent cabinet reshuffle and the environmental authorisation for the construction of a new nuclear power plant near Koeberg suggests that the SA government has not given up on the nuclear deal, nor have they learnt anything from the Western Cape High Court ruling.

Says McDaid, “Sadly, the SA government seems to be on the same path to a nuclear deal as it was previously, even though it was ruled unlawful and unconstitutional. This is why SAFCEI have resumed the weekly Wednesday vigils (from 07h00 – 09h00) outside Parliament, to remind both government and citizens that we have not given up the fight against dirty nuclear energy or government corruption.”

Pooven Moodley, spokesperson for the Campaign for a Just Energy Future adds, “Promoting public participation forms part of the PCE’s role of oversight of the Department of Energy (DoE) and is the second time that this request has been made, without any results or response from the PCE.” 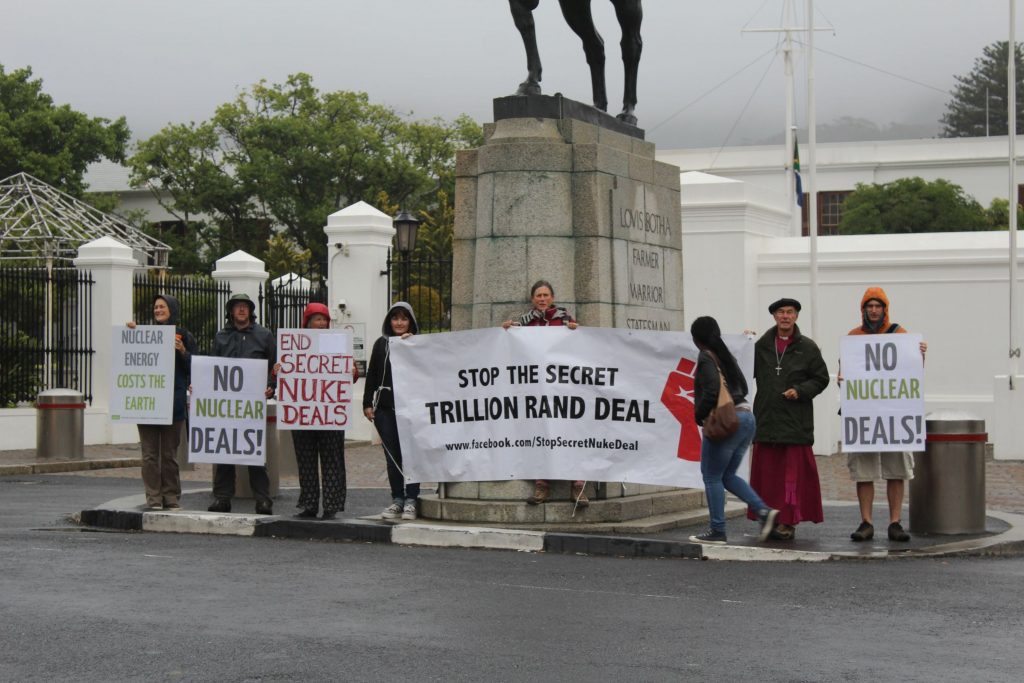 The Southern African Faith Communities’ Environment Institute (SAFCEI) – partners in the Stop the Secret Nuke Deal campaign and the Campaign for a Just Energy Future – have resumed their weekly Wednesday vigil (7-9am) outside Parliament to show their dissatisfaction with government’s continued nuclear energy plans.

Issued by Natasha Adonis, on behalf of the Stop the Secret Nuke Deal campaign. For more information, contact Natasha on 0797-999-654 or adonisnatasha@yahoo.co.uk.