As part of marking 2015’s World Day for Farmed Animals and World Animal Day, SAFCEI’s One Web of Life (OWL) programme convened an evening of reflection and conversation on how we as humans relate to and treat our fellow beings. 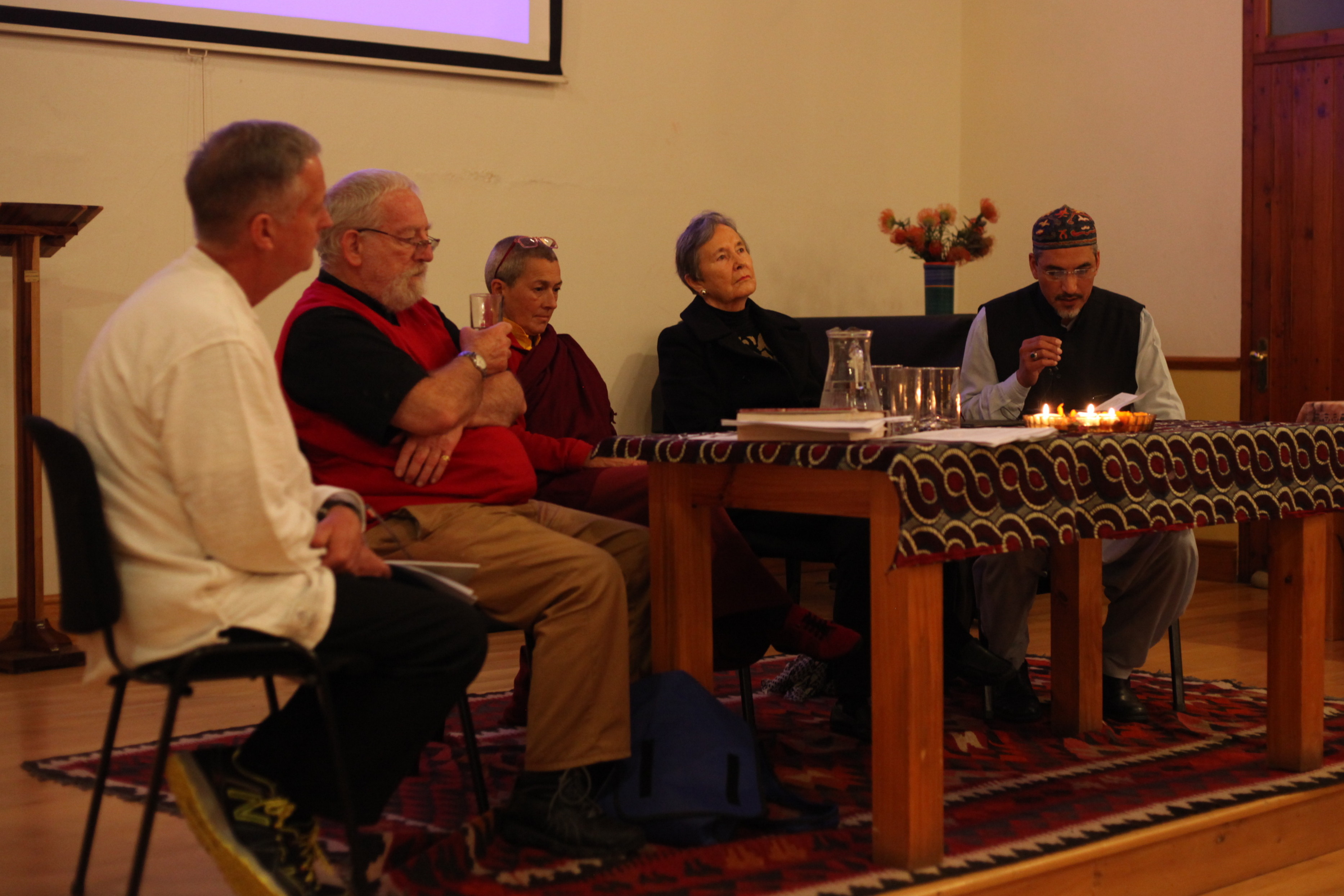 The event, which took place on 30th September at Erin Hall, Rondebosch, began with a background briefing on factory farming of animals in South Africa given by Mr Tozie Zokufa (Chairperson of the Pan African Animal Welfare Alliance, Programme Manager of Farm Animals, Humane Society International and World Animal Day Ambassador in South Africa). He spoke to the rising meat and animal product consumption in South Africa, which ranks number one on the African continent in terms of per capita consumption. This in turn has implications on how animals are treated; whilst there are guidelines that are meant to ensure animal welfare, most are not followed.

Before each panelist looked at what their faith said about animals, Rev. Rachel Mash read out a statement from Archbishop Thabo Makgoba.

Ani Tsondru spoke about the Buddhist’s teaching of compassion: “Compassion is the identification with the Other such that it is not an Other any longer. And what that means, is that you cannot treat anything as Other than you, and so it does not matter what all the statistics are or how well animals are treated before they are killed to be eaten; what matters is the recognition that you and that Other Being, are one and the same. And that anything you do to that Other Being, you do to yourself…And when we uncover [our inherent compassion], then there is no way we can cause harm to any Other Being.”

Christianity, which Professor Denise Ackermann spoke to, also acknowledges the interrelatedness of all beings, in the sense that all life comes from the hand of the Creator. She also spoke about the special place that humans – who have been made in the image of God and are bearers of consciousness – occupy in creation. This consciousness means that we also bear an awareness; an awareness of the world around us and of the actions we undertake. “That awareness should lead us to understand that this world does not belong to us, but it belongs to God and that our responsibility is to be carers of it. We have the task of keeping creation for God.” After going on to speak about the many challenges we face today – including our ideology of consumerism which leads to the statistics Tozie touched on – she ended by saying:  “Is there a way forward? I believe it is by affirming our relationships and our interrelatedness to every single living creature… I also dream of a world where there is compassion, where there is mutuality in our relationships with what is around us instead of dominance.”

Rabbi Richard Newman quoted the many instances that the Torah speaks about the necessity of showing the same respect and compassion towards animals, as we would like to have shown to ourselves. Several of the holy figures in the Torah are shepherds; and a correlation is made between those that cared for animals, also caring for their fellow human beings. And those that showed indifference towards animal suffering were punished. Whilst in the five books of Moses, humans are given dominion over animals, Rabbi Newman went on to say, “but dominion does not give us the right to cause indiscriminate pain and discomfort and destruction…Judaism puts great stress on the proper treatment of animals.” Rabbi Newman ended with a prayer for animals he had written himself.

Moulana Mathews spoke to how the Prophet Mohammed was sent to show the way for this era; he was sent to teach us how to love and care for all of God’s creation. We have been given a responsibility, as the khaleefa, to take care of creation and keep the balance in creation. “When I look at creation, I am overwhelmed by the wonder work of God…He has created in truth and with purpose. And His purpose is for us as human beings to develop ourselves spiritually and grow nearer to God; to purify ourselves through love for creation” he said.

This conversation is the first of many to come as SAFCEI and the One Web of Life (OWL) programme wants to continue to challenge people of faith to consider how their religious belief systems guide them in their relationships with, and treatment of, animals.

Frank Molteno, who works within the OWL programme and who was instrumental in organising this event had this to say about the evening:

“So many statements were made and questions raised that were deserving of further reflection, prayer and conversation.  The issues are complex.  The issues are personal as they are ‘political’ and ‘cultural’ – they touch who we are and how we live.  We have much to learn, including from one another as members of different faiths.

Of one thing I felt even more sure following the Forum than before:  if ‘the problem’ is humankind’s disconnection from the rest of creation, which results in, amongst other things, our failure to care for our fellow living beings and our treating animals cruelly and inhumanely, then if we as people of faith are not part of the solution, we are most definitely part of the problem.

We need to take our conversation forward in ways that can take us forward spiritually, theologically and ethically in terms of how we live our everyday lives.”

*Only extracts were given from each speaker – there were many more topics touched on and discussed throughout the evening and this is only a sliver of the whole conversation that was started that evening.