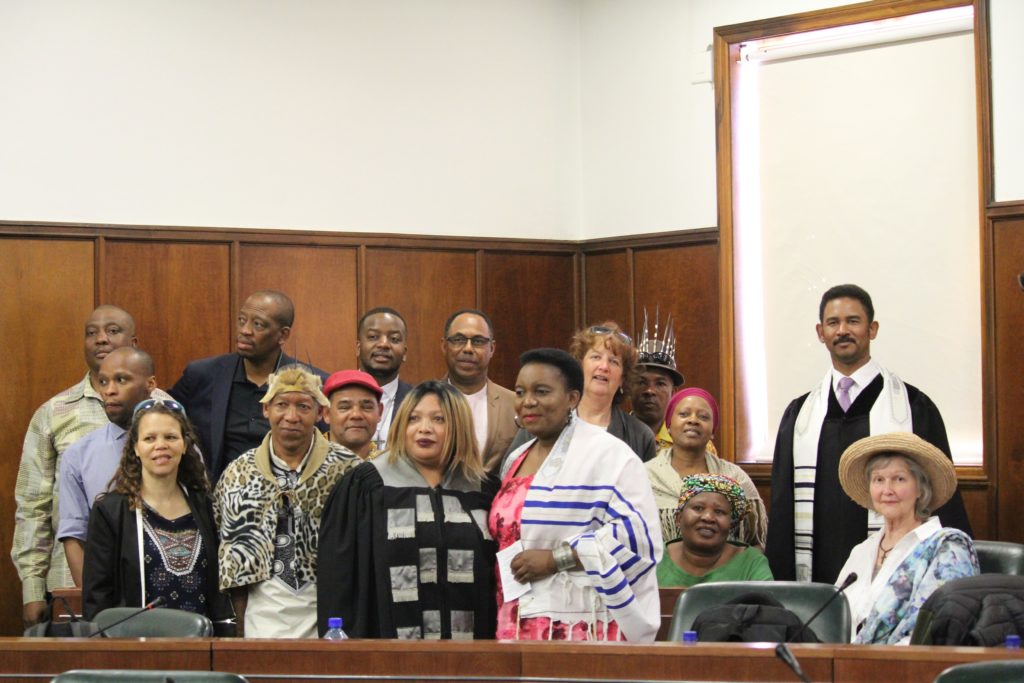 Today in Parliament – As the country braces itself for the National Treasury’s Medium-Term Budget, the Southern African Faith Communities’ Environment Institute (SAFCEI) joins other NGOs, faith leaders and citizens from around the country to present its comments on the draft Integrated Resource Plan (IRP) 2018 proposed by the Department of Energy (DOE). In recent years, the IRP has been at the centre of the country’s #StateCapture woes – since it was manipulated to force nuclear unnecessarily into South Africa’s energy mix – resulting in an unlawful nuclear deal that could have completely tanked the country’s budget (and which contributed largely to South Africa’s downgrade to junk status).

SAFCEI’s Eco-Justice Lead, Liz McDaid says that while the current proposed IRP is a major improvement from previous draft versions, it still needs to some improvements, particularly since the plan still includes new coal, and the possibility of nuclear later on.

“If this draft energy plan is approved and is not the least cost plan, then the people of South Africa will suffer through higher electricity prices, and the beneficiaries will once again be the few elite with vested interests, says McDaid.”

In its submission, SAFCEI highlights the need for an environmentally sustainable energy plan – a plan which presents a more practical and realistic approach to socio-economic development. The NGO also draws attention to how the South African government is measuring development, which will mean that  certain citizens will ultimately be sacrificed in the name of development.

Says McDaid, “It is critical that coal jobs, for example, are not sacrificed.  We need a practical clear plan to ensure that those currently working in the coal industry are reskilled and placed in the renewable sector – no one should be left behind in a ‘just energy transition’.”

“Our hope is that government leads South Africa to an electricity plan that relies on 100% renewable energy, which is not only possible, but also the only way to ensure true social and economic development. More than any of the other energy options, renewables promise the most in terms of jobs, sustainability, and new opportunities for more South Africans (especially those who would normally be excluded from this sector). Renewables are also our best response to mitigate SA’s contribution to climate change, she adds”

A key aspect of SAFCEI’s submission, is the call for corrupt and incompetent government officials to be held accountable for the millions of taxpayers’ rands that were wasted in the pursuit of the unlawful nuclear deal. Many of the dubious dealings have not yet been addressed by President Ramaphosa, the Minister of Energy or Parliament, and no-one has been brought to book. Yet, South Africans continue to pay – through increased taxes and fuel prices – because of the corruption of the Zuma regime.

“To demonstrate the shift to ethical governance, the President needs to deal decisively with the guilty parties. This is the only way our democracy can work. If we are not able to hold government officials accountable for their behaviour, our precious vote means nothing. Government plans need to be in the public interest and perceived #StateCapture must be rooted out, with those responsible, held accountable, concludes McDaid.”

According to Pastor Neville Van Rooy – who was able to make the trip to Cape Town to attend the hearings and share some of the issues facing communities in the Karoo – these public hearings are a positive start to promoting ethical governance. He adds that civil society has been asking the Portfolio Committee on Energy (PCE) for a hearing, since 2015.

“This is the first time that the public has been invited to participate in the IRP. Yet, we are the ones who have to live with the devastation resulting from government’s short-sighted and uninformed decisions. They don’t live where we live and don’t have to suffer from their own decisions. It’s just a pity that we get such a short time to give our inputs,” says Van Rooy.

“In the Karoo, we are under constant threat of uranium mining and fracking, posing huge risks for us, but more especially for our precious groundwater. Having participated in SAFCEI’s roadshow in the Northern Cape, it is clear that mining turns communities into ghost towns. We don’t want that for our beautiful Karoo.

While I had a chance to state my case today, it is disappointing that government doesn’t make participation easier for citizens, especially considering that we also have a responsibility to protect our environment. For our democracy to work, we need a government that wants to include its citizens and citizens should be involved, Van Rooy adds.”

Mthobisi Wellington Sibanda, Student Minister at the United Congregational Church of Southern Africa also talks about human beings as stewards for creation. He says, “But, somewhere along the way in the development of spirituality, we lost our relationship and responsibility towards creation. We saw creation as an object of exploitation rather than as a source of our sustenance which requires not only our stewardship but our reverence as well.”

As a multi-faith champion for the environment and the communities that inhabit it, SAFCEI is committed to energy solutions that eradicates any human suffering or environmental degradation. The NGO asserts that with the unknown consequences of nuclear waste storage – which will most likely lean heavily on the country’s budget later down the line – and the ongoing impacts of carbon emissions from coal on climate change, renewable energy is the only option.

Issued by Natasha Adonis, on behalf of SAFCEI. For more information, contact Natasha on 0797-999-654.

Interested persons and organisations are invited to submit written comments on the draft Integrated Resource Plan 2018 to the Director-General of the Department of Energy for the attention of Mr Tshepo Madingoane: IRP.Queries@energy.gov.za
Kindly provide the name, address, telephone number, fax number and e-mail address of the person or organisation submitting the comment. Please note that comments received after the closing date may be disregarded. 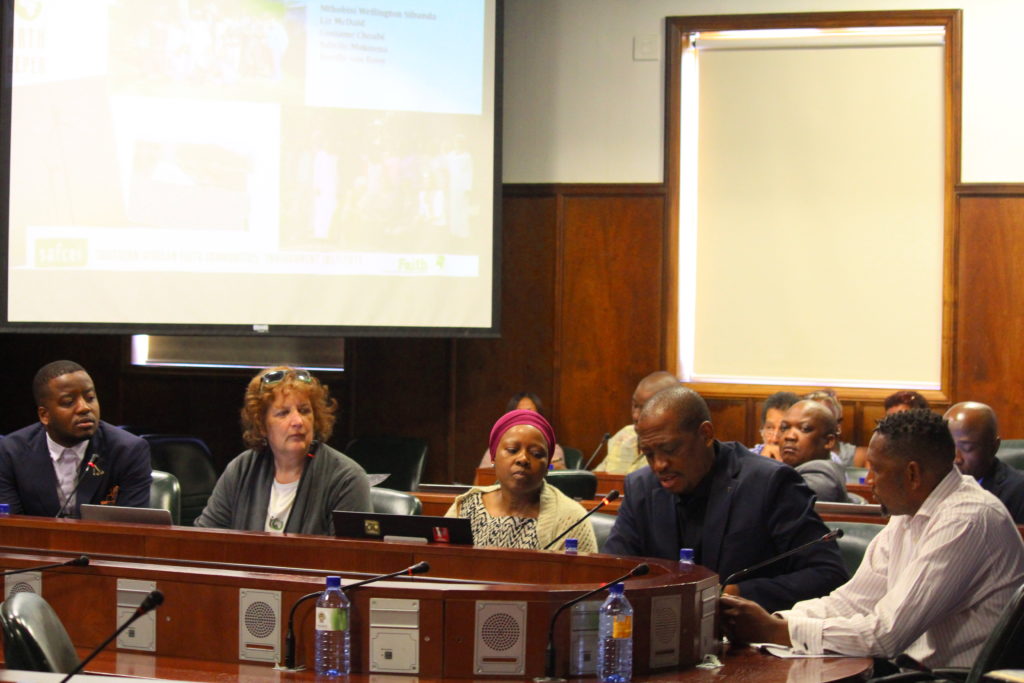 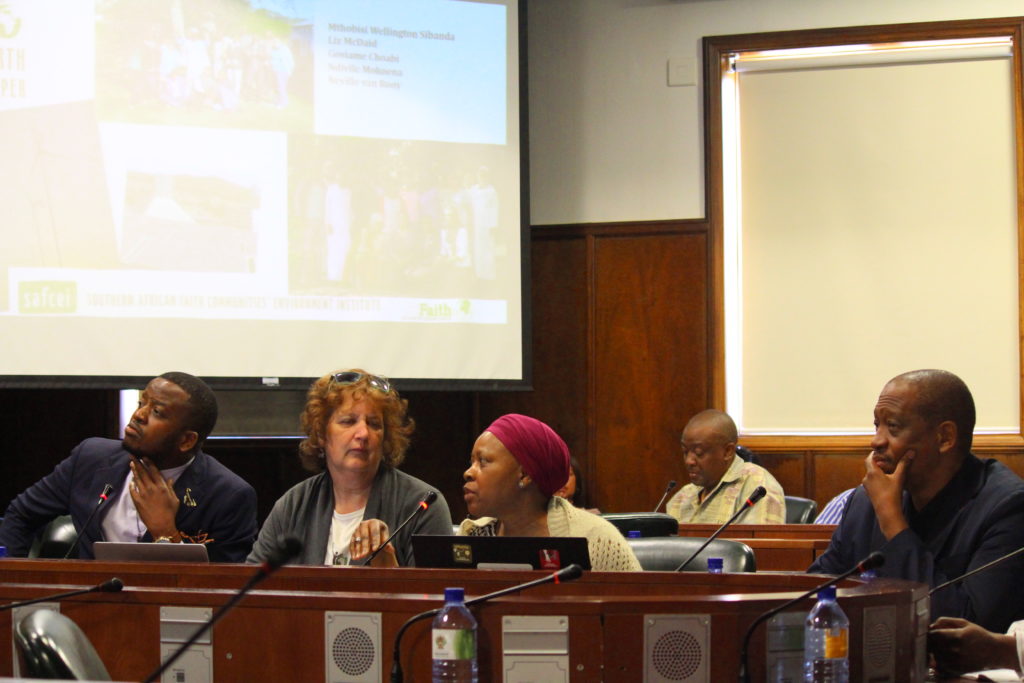 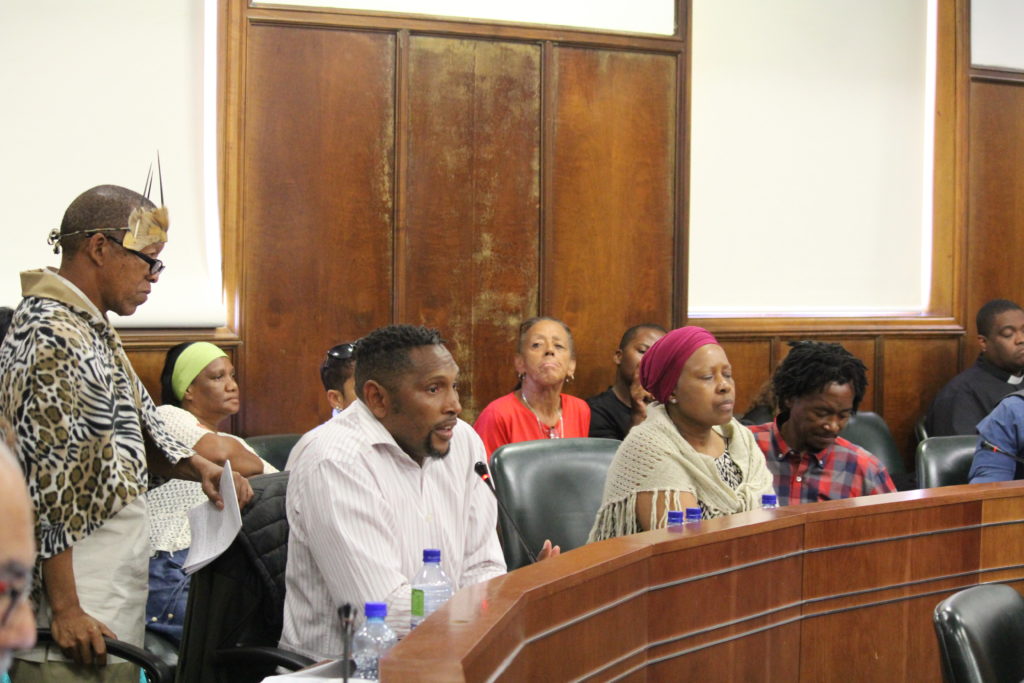 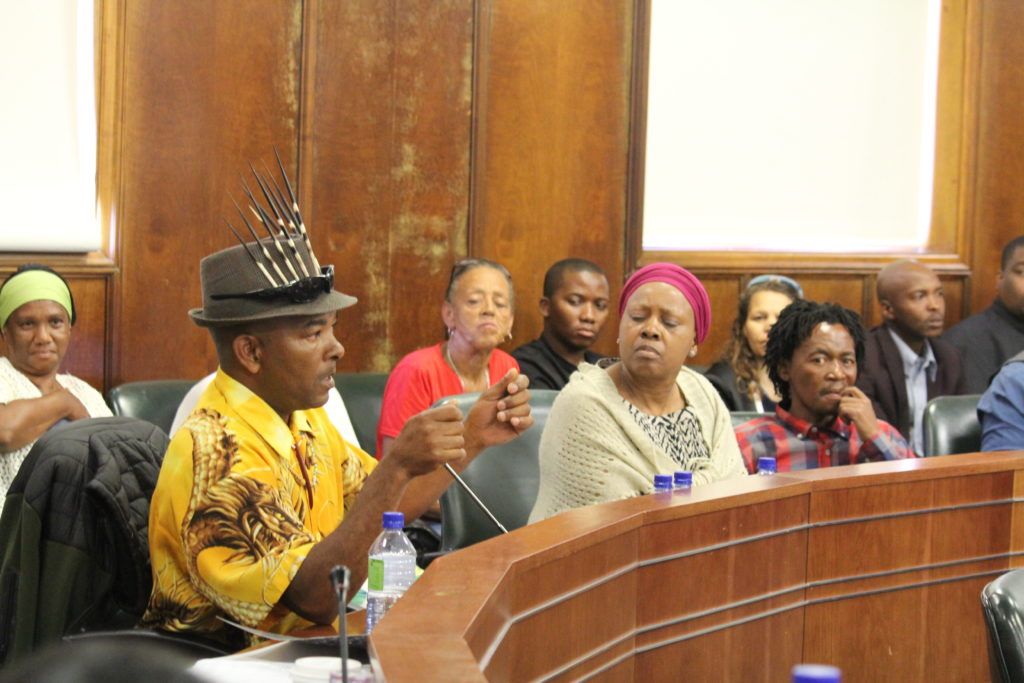 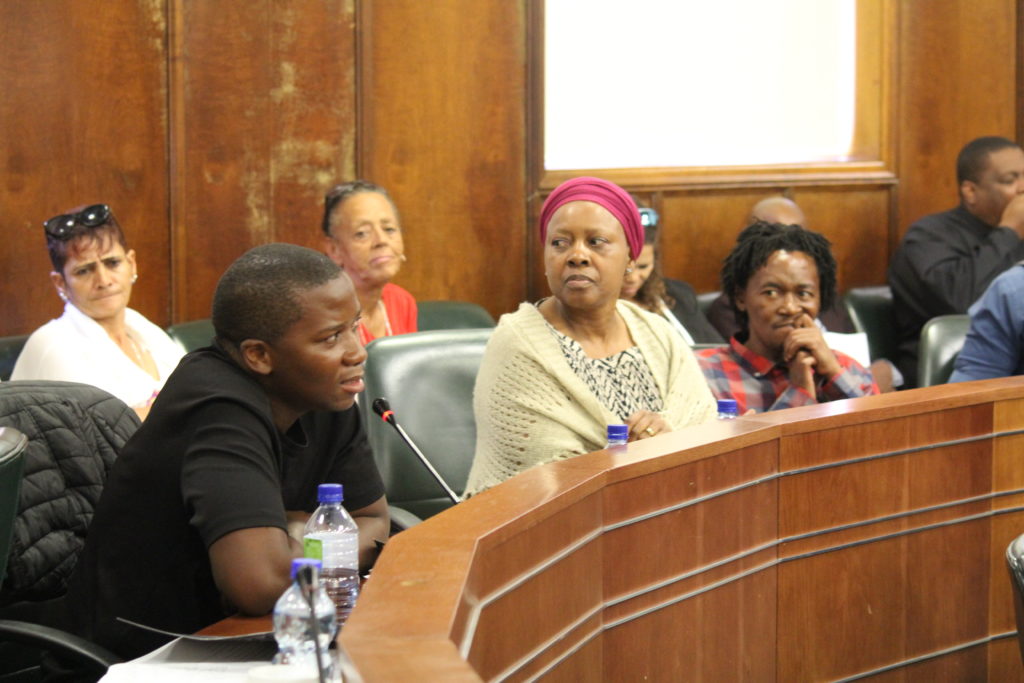 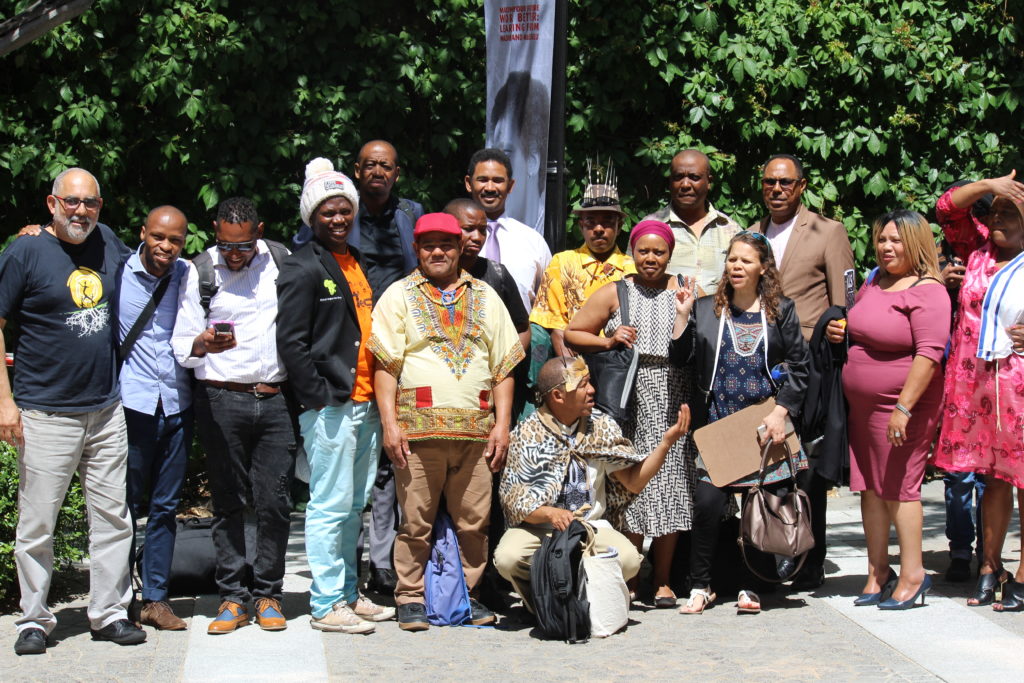