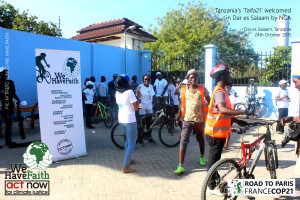 As Tanzania casts its decisive vote today on 25th October 2015, the We Have Faith Act Now for Climate Justice Campaign, which is solely using cycling as a mode of transportation from Maputo in Mozambique to Nairobi in Kenya, clocks approximately 5,067km!

It has taken 55 days for the caravan to reach its present spot, launching in Maputo on August 31st.

Yesterday 24th October the caravan was officially received by the Norwegian Church Aid (NCA) Tanzania office, after it traveled from Msata to reach the sea coastal city, about 120km through Bagamoyo, another coastline town.

Country representative Tale Birkeland Hungnes said she was as proud as have been all the other countries when they officially hosted the teams of in-country cyclists through their cycling relays.

“For us here in Tanzania we say that climate change has a human face and that we are committed to ensure that future generations benefit from our efforts. To the cyclists, you are our heroes and we and all the other countries know that your efforts will surely translate when we go to Paris, France, for a fair and legally binding deal. We are asking world and all leader at all levels to take us seriously through your tireless efforts,” she said at the NCA offices.

The campaign has been through six countries and Tanzania where it currently is, is the seventh in the campaign and the first in East Africa. From Dar es Salaam, the campaign moves on to Arusha before connecting with Kenya at the Namanga border.

In Maputo, Mozambican cyclists traveled about 100km from the capital to Komatipoort where they were relived by South African cyclists, who went through Tswane and proceeded to the border with Botswana to handover the baton. South Africa has the biggest pollution problems due to massive extractive industry in places like Rustenburg and Machadodorp, where municipality officials called for meaningful Global Climate Funding and youth movements questioned the authorities about their role in reducing other than promoting policies that lead to more pollution and environmental degradation.

Messages of climate change and its effects were sent to populations along the route and also through vigorous media strategies that include social and established media platforms and houses.

From Botswana the campaign hit Gaborone, which is suffering serious water shortages due to climate change. A main concert took place in the city before Tswana cyclists went on to cycle to the border with Zimbabwe. Efforts at planting many trees took place in both Botswana and Zimbabwe to add to the world’s approximate 3.04 trillion trees and reclaim a carbon sink that may help attract back rains and provide clean air and energy to the Sadc countries.

A number of companies, especially those agro-based including tobacco industries, have shut down in Zimbabwe rendering people jobless. Many expressed their dispair and also lamented the continued and growing extents of power shedding which often starts at 5am and ends about 11pm.

The about 30% loss of water in the Kariba Dam, which feeds Zimbabwe and Zambia with electric power, has also seen other SADC region countries suffer energy supply levels. New islands have emerged in the Kariba Lake where water levels have drastically dropped since 2014 May.

Zambia also suffers electricity shortages due to the Kariba Dam drying up. It also has, like Botswana, started rationing water – creating a waterborne disease threat that could wipe out mainly rural and semi-urban populations whose water sources remain unsafe.

Forest cover in Malawi has greatly dwindled, especially at the Chikangawa Rain-forest which has lost its 8 months of rain season down to three per year.

Despite planting more than 1 million trees per year, a plantation company bemoans the fact that without rains it is difficult to fully recover Chikangawa’s once flourishing greenery to its old form and even better.

Floods and droughts, and erratic rain patterns have forced Malawi’s political leadership to declare a state of famine as bad yields have dropped the countries food security levels by close to 60%, although government announced just about 30% shortfall – especially in maize yields which is Malawi’s main source of food.

Across the border in Tanzania, cyclists have gone through kilometers mainly of a weather pattern that locals say has greatly changed for the worse. Water jerrycans are everywhere as a sign of people hunting for the precious commodity, creating more pressure on women and girls as they walk longer distances to fetch for water, in the process denying them ample time for family cohesion, economic engagement, education opportunities, and better livelihoods.

Throughout faith leaders and communities, government officials, school children and students, communities and well-wishers have signed the African People’s Petition to add their voice to demands for world leaders to enter into a fair, and legally binding deal at COP21 in Paris in December.

Most signatories are hopeful that their signatures would have not gone in vain, and demand that the different groups of cyclists and campaign officials do come back with a better feedback from Paris.

They want to know if their efforts have yielded a better future for generations to come.

As the campaign gives space to Tanzania to vote today and go through the regime political processes, it is clear that the lasy leg of the cycling campaign for Tanzania will garner more support for both the new and old leaders that the vote would have put in power.

As for Uganda and Kenya, the last parts of the campaign will be critical to work and underscore the efforts of all the other participating countries.

At about 5,067 km, the caravan has not only gained more experience and ground, it has managed to create space for new climate justice ambassadors, and unveiled three extraordinary ambassadors from Zambia, Malawi and Tanzania.

All willing to continue with the climate justice campaign in their communities and beyond.

All the cyclists have also committed their time to providing awareness to climate change and enhancing the movement across the African continent.

The journey continues from 3rd November, 2015 when Dar es Salaam rise and cycles towards Kenya!