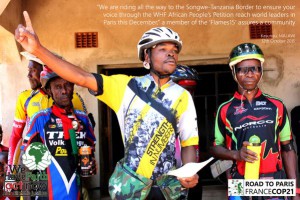 The evergreen northern city of Mzuzu on 14th October witnesses the official entry of the ‘Flames15’, Malawi’s cyclists in the 6,500km pan-African Climate justice campaign.

The 15, including ‘Lady’ Ivy Kamanga will have covered approximately 492km since Chipata border with Zambia at Mwami.

They were flagged off by faith leaders led by Malawi Council of Churches’ acting General Secretary Bishop Gilford Immanuel Matonga and Episcopal Conference of Malawi’s Arch-Bishop Tarcisio Ziyaye at the Mchinji Community Ground.

The government was represented by an official from the Environmental Affairs Department and Mchinji District Commissioner. Zambia’s Chipata District Commissioner Kalunga Zulu and WHF Regional Coordinator/Council of Churches in Zambia team leader Abraham Chikasa handed over the baton.

On Saturday 10th October guest of honour Hon. Felix Jumbe led Malawians in celebrating the country’s involvement in the campaign at the We Have Faith – Act Now for Climate Justice Concert at the Silver Stadium.

A business man who runs a successful drought resilient seed production company, Peacock Seeds, Hon. Jumbe is also chairperson of the Parliamentary Committee on Agriculture and speaks passionately about climate change and the need to utilise climate smart agricultural technology.

“As a country we will benefit more if we invested in technologies that preserved our green cover and at the same time sought CSA as a new way of increasing our productivity around a clean environment, food security, and economic growth,” he said.

Bishop Matonga, Hon. Jumbe, principal secretary from the ministry responsible for environment and climate change, a youth representative and a civil society representative all signed the African People’s Petition, symbolising a strong Malawian voice working to influence the outcome of the 21st Conference of Parties (COP21) of the United Nations Framework Convention on Climate Change this December in Paris.

Malawi joins 8 other east and southern Africa that have employed zero emitting cycling in creating awareness and mobilising the African voice demanding for a fair, strong and legally binding agreement around climate change, and for world leaders to commit to reducing greenhouse gases way below 2°. The movement also demands that polluting developed countries commit adequate resources to help poor countries adapt and mitigate.

The Malawi cyclists have made strategic stops at Mponela in Dowa, Kasungu, Mphommwe, Jenda, and Mzimba boma. In Mzuzu they will make stops at Game Shops, Mataifa market, Livingstonia Synod campus, and Luwinga before resting.

They will make stops at Ekwendeni, Rumphi turn off, Chitimba, Uliwa and finally Karonga before embarking on the final leg to the Tanzanian border at Songwe, to officially hand over to their Tanzanian counterparts.

Malawi will click 17 days in the 70 days journey that started in Maputo Mozambique through South Africa, Botswana, Zimbabwe, Zambia and will end in Kenya, about 6,500km in total.