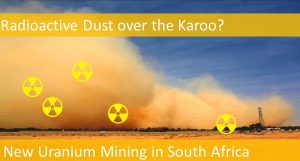 The debate around nuclear until now has largely centred on how the procurement of nuclear energy is being done in secrecy and without proper consultation, that the price of proposed nuclear reactors will plunge South Africa into deep debt and that there is no proper solution for the nuclear waste which will burden generations to come. However we’ve said and heard little about what comes before nuclear energy: uranium mining.

To not raise the debate around this important link in the chain could have dire consequences not only for the Karoo where the mining is being proposed, but for many other parts of South Africa – and even Africa, for if uranium mining and nuclear go ahead here, other African nations might well follow suit.

SAFCEI is concerned because as a faith based organisation we cherish Creation, and wish to preserve what our Creator has given us. We also believe in ethical and just governance – something which has not been shown of late.

For these reasons Dr Stefan Cramer, SAFCEI’s Science Advisor, has begun investigating this urgent matter; below is a shortened version of the article he published in Karoo Space.

After Fracking: Is Karoo Uranium Mining the next big threat?

A new industry threatens the Karoo – but there is no debate

Just when we thought that fracking is never going to happen in the Karoo, another threat probably more frightening and more probable is raising its ugly head.

The Karoo has long been known to harbour substantial sedimentary uranium deposits. Now an Australian company with Russian funding is planning to get the radioactive mineral out of the ground in a big way.

Silently they have accumulated over 750.000 hectares of Central Karoo properties around Beaufort-West and plan to set up a large Central Processing Plant just outside that town.

While the nation is still debating the pros and cons of fracking, the Environmental Impact Assessment (EIA) as the precursor to mining licences is nearing finalization. Still this year the Department of Minerals will have to finally decide on the industry’s application.

However there is no public debate about an issue that has the potential to shape the environment of the Karoo for generations.

We can draw on vast experiences on what huge impact the uranium mining industry has had in such diverse places as in Germany, USA, Australia or Niger. The death toll of this hugely dangerous industry is well known and firmly established.

Uranium mining and the environment

According to its documents, TASMAN RSA MINES today controls exclusive prospecting rights over more than 750.000 hectares in a circle of approx. 200 kilometres around Beaufort-West. 32.000 hectares are directly owned under freehold by the company. Local farmers find it hard to resist purchase offers, as farming in this part of the Karoo is particularly difficult due to low rainfall and poor soils. Unlike in fracking, farms are permanently damaged by uranium opencast mining.

A Central Processing Plant is planned just outside of Beaufort-West. Most uranium-bearing sandstones are at a shallow depth of 5 to 50 metres below the current surface and will thus be excavated in open pit mining. Only a few sections will be extracted by underground mining.

So far the company has not indicated to use the dreaded “in-situ-leaching”, a particularly dangerous but low-cost method. Here, large quantities of sulphuric acid are injected underground. The uranium is dissolved and recovered in well fields. The uranium deposits are scattered over large zones of 200 by 300 kilometres which will necessitate trucking of ores over poorly constructed dust roads for hundreds of kilometres to reach the Central Processing Plant. 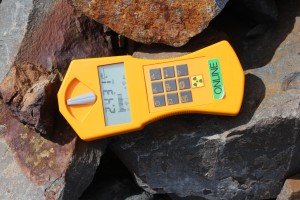 For this plant, the company has already applied for a water license to annually abstract 700 million litres of groundwater, roughly half of the total water consumption of the Central Karoo Municipality. It is still unclear what will happen with the contaminated waste water. A discharge of radioactive waste water into the aquatic environment, above or below ground, would be illegal under South Africa’s strict Water Act[i].

Most likely contaminated slimes will be delivered to large settling ponds, like those around Johannesburg, from which the remaining water will evaporate. This leaves behind a soft and unstable pile of contaminated soil which can be easily mobilized by the strong prevailing winds in the Karoo into large dust dispersal. Already today, the environment around Beaufort-West is contaminated close to the previous mine sites. First field studies by the author show unprotected nuclear waste sites with 10 to 20 times the normal background radiation.

The devastating impacts of uranium mining on people, especially the mine workers, and the environment have been well researched and documented. Several studies of large number of cases and with exposure over many years[ii] [iii] have established a particular direct relationship between occupational exposure to uranium and its decay products, and lung diseases.

Mining uranium ore in the Karoo will invariably create huge plumes of contaminated dust. Dust clouds are unavoidable during drilling, blasting and transporting. Dust suppression by spraying water is only partially effective, creates new problems with contaminated slimes and adds to the environmental cost of groundwater abstraction.

What is happening now in the Karoo?

PENINSULA’s Karoo project is still at the Pre-Feasibility-Study (PFS) stage. While the specialist studies for the Environmental Impact Assessment (EIA) are currently nearing termination, the company will be obliged to disclose its detailed mining and engineering plans to the general public in a series of public consultations in all affected municipalities.

This process of public participation is opening the space for a more rigorous public debate on a key issue of the future development of the Karoo, not only in the directly affected Central Karoo, but also further afield. But the current level of information on uranium mining in general and the detailed plans for the Karoo in particular is still rather poor.

A series of information sessions in 2015 by the consulting company Ferret Mining attracted only a handful of local farmers and other interested and affected parties. The three provincial governments are completely silent.

The current national nuclear debate centres on nuclear power generation alone, but fails to address uranium mining at the origin of the nuclear value chain, with its widespread damages and costly remediation requirements. The legacy costs of uranium mining have been well researched and documented[iv],[v]. The affected municipalities should start their own debate as part of their legal duty to develop consistent and sustainable Integrated Development Plans (IDP). Many of the affected municipalities’ IDPs do not even reflect, or discuss the long-term threats stemming from uranium mining in their midst.

Impacts even outside the Karoo

Many people realize the widespread impacts of mining only when it is too late. The Brazilian fisherman woke up to that reality, when the large tailings dam of SAMARCO in the Minas Gerais region burst and sent a toxic plume of millions of tons of mine wastes into the Rio Doce, one of the most important waterways of Brazil.

More than 500 km of river will have to be dredged to remove the toxic sludge. The environmental damage is estimated alone at 5 billion US-$. Most of the uranium mining fields of the Central Karoo drain into the Gamtoos River, which reaches the Indian Ocean near Jeffrey’s Bay, ironically only a few kilometres away from the site of the proposed nuclear power station at Thyspunt.

What can be done?

It is urgent to start a massive educational campaign. The author, employed with the Southern African Faith Communities‘ Environment Institute (SAFCEI) will focus his work in 2016 on this subject.