Treasury has not Explored Nuclear 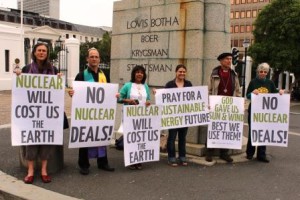 Treasury has responded to the Southern African Faith Communities’ Environment Institute (SAFCEI)’s application for information regarding the nuclear deals.

SAFCEI believes that prior to entering into any international nuclear agreements, it would be imperative to investigate any financial obligations that the country might incur under such agreements. Such obligations would presumably be drawn from experts responsible for the national budget and should require treasury approval, or at least investigation.

In the case of nuclear framework agreements, article 2 of an earlier draft Russian agreement included a clause:

“.. design, construction, operation and decommissioning of nuclear power plants in accordance with the requirements of the Republic of South Africa, including enhancement of key elements of nuclear energy infrastructure”.

Such activities might conceivably have serious financial and economic impacts and it would be sound corporate governance for the country to put such agreements under a financial microscope and particularly, for the government arm that looks after the public purse to investigate any economic impacts that might arise from such international agreements.

SAFCEI therefore asked Treasury for all “Records reflecting decisions taken related to the financial obligations and the economic impact of the decisions reflected in intergovernmental agreements on current strategic partnerships and cooperation in nuclear energy” in terms of the Promotion of Access to Information Act (PAIA).

The Treasury has responded to our request for information as follows:

“The implication of this acknowledgement by Treasury is that the South Africa nation has entered into an international agreement without doing their financial homework” said Ms Liz McDaid, who heads up SAFCEI’s ethical governance project.

At a board meeting in October, SAFCEI elected to seek legal counsel to investigate the nuclear contracts which South Africa had signed. Faith communities are gravely concerned at the government’s continued support for nuclear energy despite evidence that South Africa cannot afford it.

SAFCEI supports affordable energy that will enable our country to address the current social inequities and promote ecologically and socially responsible development, rather than large fossil fuel and nuclear central power plants that run over budget, over time, and pose considerable risk of corruption.

Board member Ani Tsondru stated that “SAFCEI believes that the citizens of the country need to know how they will be affected by any international agreements we sign. It is disturbing to find that treasury had no role in such a prominent international agreement which will have such great economic, social and environmental implications for so very many years to come.”