Taking back ownership of our seeds 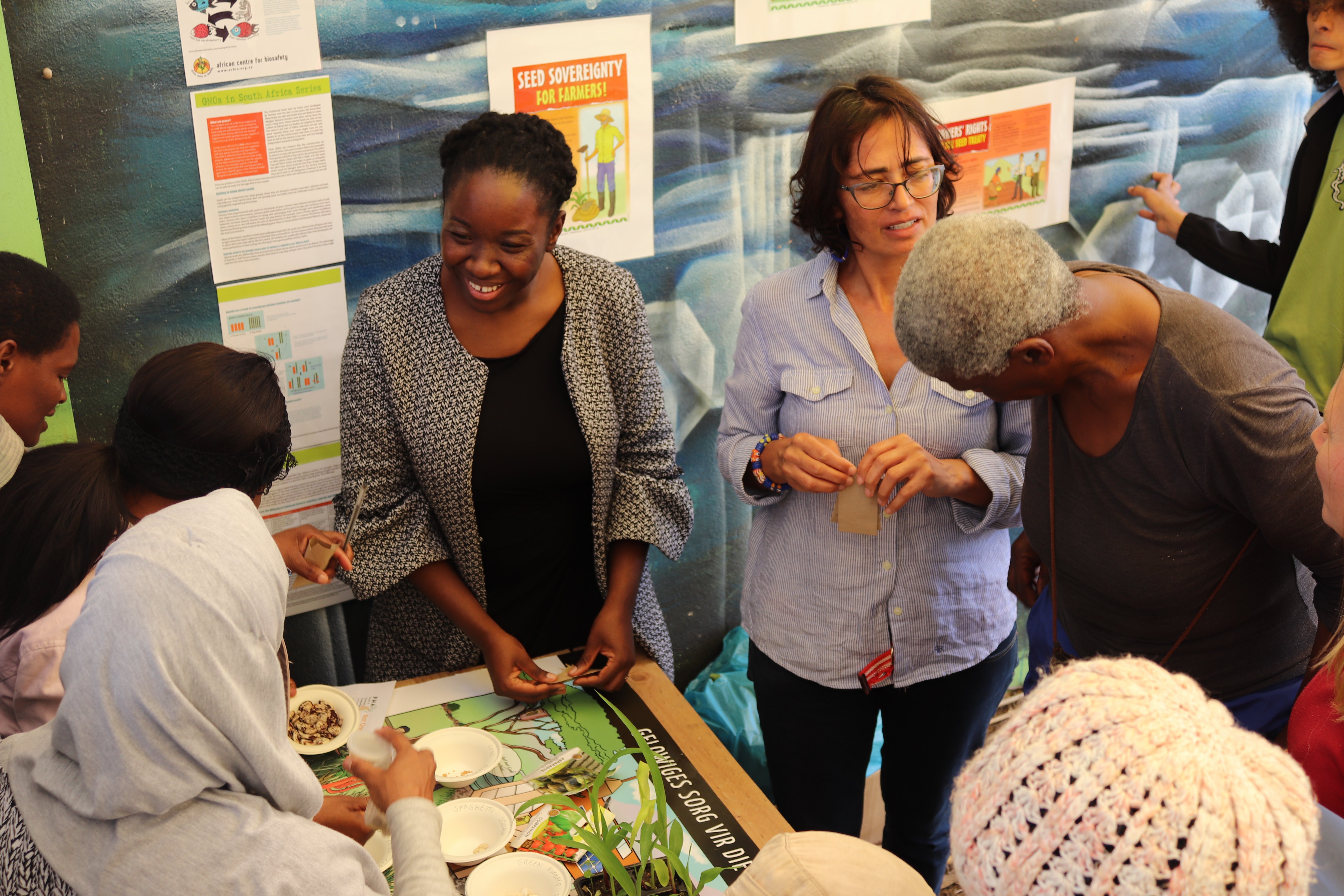 Seeds are one of the most remarkable miracles, where life bursts forth from the tiniest dormant organism. Humans have spent generations caring, saving and sharing seeds to ensure that there is enough diversity for both themselves and the natural world on which they depend. However, today the practice of sharing and swapping seeds is increasingly becoming illegal. Recent seed laws have put agribusiness profit over practices that people, who live close to the land, know are essential for long-term sustainable food production and security.

SAFCEI held a Seed Swap event to claim back practices of sharing diverse seed varieties and discuss some of the injustices within the seed system. The event was part of the Green Action Week campaign to promote sustainable consumption. Held at the Phillippi Horticultural Area (PHA)’s campaign centre, the event brought together farmers and home growers from around Cape Town.

The importance of swapping seeds in South Africa

South Africa is the only country in the world whose staple food crop, maize, is genetically modified, and has been for over 20 years. “Basically we are a big global experiment” stated the guest speaker and seed expert, Stefanie Swanepoel. The problem with this is that there are no long-term studies on the affect this is having on our health or the ecosystems where genetically modified maize is grown.

Stef explained that smallholder farmers were our first scientists. Over thousands of years’ farmers experimented with seed to produce crops that were tasty, healthy, had medicinal value, and were resilient. In contrast, we have only been genetically modifying seeds for the last 35 years.

Unlike ‘open-pollinated’ seed, scientifically developed hybrid and genetically modified seeds do not produce seeds that can be saved and used the following season. As a result, farmers are forced to buy new seeds every year, taking the ownership of the “science” of seed development away from farmers and into the hands of corporate agribusinesses.

In South Africa, two new seed laws (the Plant Breeders Rights Bill and the Plant Improvement Bill) were put in place to protect and regulate the commercial seed industry. These bills do not only fail to recognise or protect farmer-managed seed systems but they directly undermine the rights of farmers to save, sell and exchange their own seeds.

As we face a rapidly changing climate it is essential that we have access to the right kind of seed. We need seeds that are able to shift over a few seasons to adapt to Cape Town’s hotter and drier conditions. In addition, farmers need the knowledge and freedom to experiment with open-pollinated seeds to establish which varieties work in their specific changing environment. Legislation, such as the Plant Breeders Rights Bill and the Plant Improvement Bill, directly threaten our capacity to adapt and thus threaten our ability to produce affordable and nutritious food with the coming climate crises.

As people of faith it is our duty to be custodians of nature, and see ourselves as a part of the web of life. Therefore, we must protect seed diversity and ensure a just distribution of seed and the food they produce. It is for this reason, that we believe seed swaps are a central aspect of our food system in a “sharing economy”.

The general feeling was there was much more to learn and discuss surrounding seeds and that it would be valuable to have further seed swaps in Cape Town.

If you would like to be involved in the next seed swap event. Let Robyn (robyn@safcei.org.za) know and we will notify you when we hold a similar event.

Green Action Week, held 30th September to the 6th October 2019 is a global campaign where organisations from around the world take joint action to promote a common cause. This year 50 organisations from 30 countries took part in the campaign to tackle Sustainable Development Goal (SDG) 12, our unsustainable consumption and production patterns, with the goal to ensure everyone’s right to a healthy environment and a better quality of life. Under the theme “Sharing Community”, organisations highlighted practical examples of more sustainable ways to access goods and services.