Save the Budget (and the Country), Minister Gordhan. Say ‘No!’ to Nuclear! 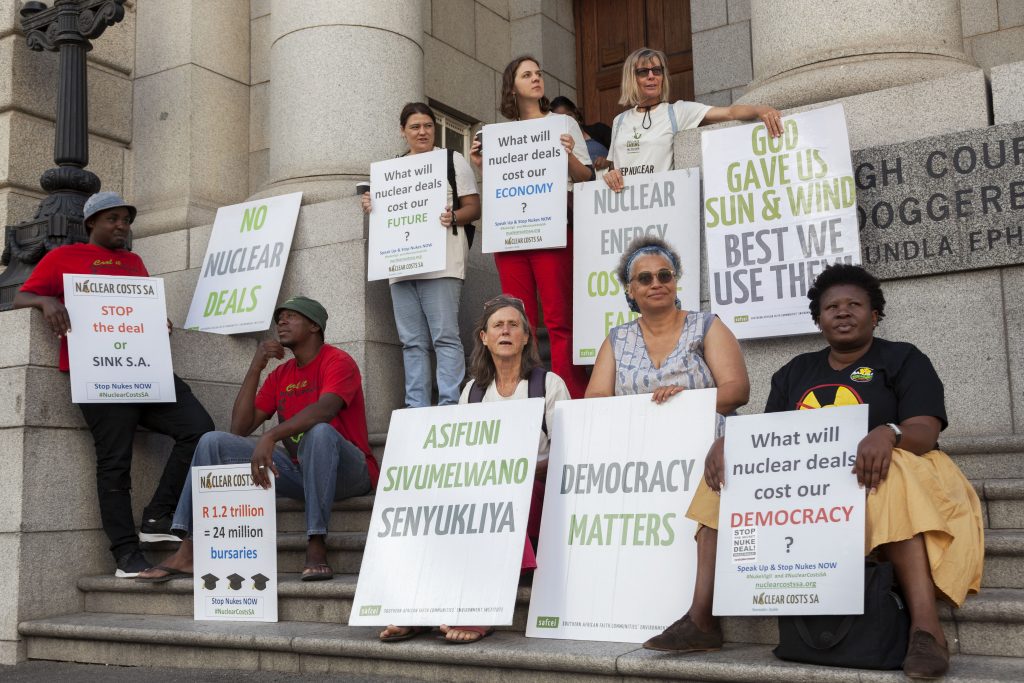 SAFCEI, Earthlife Africa Jhb and supporters gathered outside the Cape High Court for the first court hearing on 13 December 2016.

This morning, 22 February 2017, as the rest of the country waits with baited breath for Finance Minister, Pravin Gordhan to present his budget speech, Earthlife-Africa Johannesburg (ELA-JHB) and the Southern African Faith Communities Environmental Institute (SAFCEI), along with hundreds of ‘anti-nuclear deal’ supporters (young and old alike) will march from Parliament to the Cape Town High Court in a bid to stop Government’s secret R1-trillion nuclear deal (a deal which could lead to a national catastrophe, in the not-too-distant future.)

SAFCEI spokesperson, Liz McDaid warns that if the nuclear deal goes ahead, South Africans will be faced with much more than just the threat of an increase in Value-Added Tax (VAT), since Government will be tied-into hundreds of millions of rands worth of additional (and very unnecessary) annual debt.

SAFCEI and ELA-JHB – joined by supporters from Right2Know Western Cape (R2K WC), One Million Climate Jobs Campaign, the Green Anglicans and Catholic Justice and Peace, as well as other concerned citizens – call on the Treasury to halt further allocations of money and any further nuclear preparatory work. They assert that too much of taxpayers money has already been spent (on about 10 studies and 16 service providers, as part of the assessment process), none of which have been made public yet.

ELA-JHB’s Makoma Lekalakala says, “In the case of the nuclear deal, Parliament has failed in its constitutional duty to hold the Executive to account. This is why the march (which is a culmination of activities aimed at creating widespread public awareness), starts at the gates of Parliament and moves to the Cape Town High Court. This is to symbolise that civil society has been let down by Parliament and is now forced to seek justice from the legal system, through court.”

McDaid adds, “Whether Eskom (responsible for procurement) receives a loan from government to build the power plants, or whether government stands security for Eskom (in order for them to increase its loan from China or from the BRICS bank, or elsewhere) – the issue is that this is money that South Africans can’t afford, which is being used for something that we do not need. And no publicly available reports motivate or support the financial case for nuclear.”

The anti-nuclear campaign further calls on the Treasury to:

To date, the beneficiaries from State investment in the nuclear deal include Mr Shantan Reddy (the son of a close friend of the president Zuma) who has gained the lion’s share of the R213 million the Treasury allocated to the nuclear build in 2015/2016.  He received 80% of the money with earnings averaging close on R1.7 million per week over a two year period.

Further beneficiaries included a consulting firm which has close ties with the Russian nuclear firm, Rosatom and according to the Department of Energy’s presentation to Parliament last year, further exorbitant earnings by other beneficiaries were also revealed.

Lekalakala adds, “If we, ‘the people’ are successful in court, then the nuclear agreements between South Africa and Russia will be overturned, and the government’s contentious decision to force nuclear energy into our future, will be reversed. This will free South Africans from soaring electricity prices and generations of debt – for something we didn’t need in the first place.”

The anti-nuclear campaign urges the public to contact the Treasury to appeal to the Minister to use his influence to stop the nuclear deals until independent and affordable assessments can be done and made available to the public. (See all relevant contact information below).

Further events will happen in Jhb and Pretoria:

Earthlife-Africa will picket at the Department of Energy in  Pretoria (on Wednesday and Thursday) and also in Johannesburg, at Eskom’s Regional Offices in Braamfontein – from 11am till 13h00 (both days).

Media are called upon to encourage meaningful public participation. This can be done through:

The public engaging with what is being reported (on nuclear) in the media and write letters to their local newspaper (or even national newspapers), or they can share their concerns on any other medium (e.g. radio, social media and talk about it in their social circles). Citizens should address concerns or those of their organisation, to the people in power (see below) and copy these communications to the media.