Joy to the world, the Lord is come!

Let every heart prepare Him room,

And Heaven and nature sing

And Heaven and nature sing,

And Heaven, and Heaven and nature sing.

Joy to the world, the Saviour reigns!

While fields and floods, rocks, hills and plains

Song is a powerful medium which can bring people together and spread joy. Song connects the heart, not only to those around you, but to the Creator and Creation, as the lyrics of ‘Joy to the World’ remind us.

As Christmas draws near for those of the Christian faith, song is a central part of preparing for this season. Carols by candlelight are widely held throughout December and people from all backgrounds and ages gather together, united by song and the joyous expectation of the time to come. Song allows us to transcend our barriers and for a time be transported away from the everyday world. It can remind us of the sacredness of life; of the unity and beauty that exists in creation brought about by God.

Song in Judaism, as in Christianity, forms a large part of worship and celebration. The Torah is not spoken but rather chanted, or sung. During Jewish celebrations like Bar/Bat mitzvah’s or weddings, music is integral to the proceedings and brings everyone together in joyous dance. Psalm 96 says: “O sing to the Lord a new song; sing to the Lord, all the earth! Sing to the Lord, bless his name; tell of his salvation from day to day.”

Whilst in Islam song and singing are not part of worship, the recitation of the Quran is done in a very melodious and lyrical manner. The call to prayer which resonates out five times during the day is also an integral part of the Muslim faith and brings everyone together spiritually as the prayers are performed. The call to prayer is recited to a new-born baby as the first sound it should hear.

The call to worship in Christianity takes the form of bells, another sound that is often connected to the divine, with their clear, pure peal. Bells are therefore found in many sacred spaces. In Tibet, Buddhists ring bells as an offering to the buddhas and bodhisattvas. Bells also represent wisdom, so in ringing them one can dispel confusion.

Meditations are often guided by a bell. One gatha – the Sanskrit term for verse – that is used to help focus on this practice says:

“Listen, listen, this wonderful sound
Brings me back to my true self.”

Hindu temples most often have a bell – or ghanta – hanging at the entrance, which Hindu devotees ring before they enter. This is said to be an invocation to the deity to listen to their prayers and be blessed.

There is one sound in particular however, that is especially sacred and connected to divinity in Hinduism (as well as in Buddhism and Jainism): OM, or AUM. It is the primary mantra and represents the sound of the universe and the three deities in the Hindu trinity. As it stands in the Katha Upanishad: “When OM reverberates unceasingly within the heart, that one is indeed blessed and deeply loved as one who is the Self.” 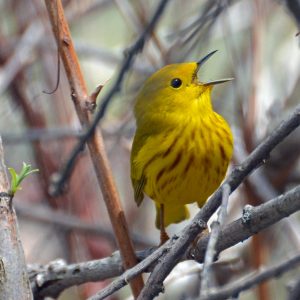 The sounds around us can also be a reminder of the Divine. In the Buddhist scripture, Amitabha Sutra, it is written that “heavenly singing and chanting is heard all day and night as mandara flowers softly rain down from the heavens. All kinds of birds produce beautiful and harmonious music throughout the day and night. Upon the blowing of a gentle breeze, the movements of jewel trees bring about a kind of wondrous music, as if thousands of gentle tunes are being played together in harmony. Upon hearing these melodious sounds, those present naturally become mindful of the Buddha, mindful of the Dharma, and mindful of the Sangha.”

So as this season of celebration approaches, let’s gather in the outdoors for picnics or braais; go for walks on the beach, through the shady coolness of forests or climb to the peak of a mountain and listen to the world around us. Let us be inspired and moved by song, bells and the sacred sounds of the natural world around us. For as Abdu’l-Bahá, the son of Bahá’u’lláh who founded the Bahá’í Faith, wrote: “The art of music is divine and effective. It is the food of the soul and spirit. Through the power and charm of music the spirit of man is uplifted.”