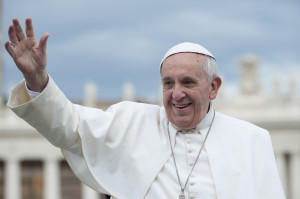 Laudato Si’s message is still ringing out strong and clear, and is being acted on in diverse parts of this world. In April a conference was hosted by the Zambian Catholic Bishops’ Conference in Lusaka where ‘Care for our Common Home’ was explored in the context of large scale mining and agricultural investments.

“The conference aims to popularise Laudato si,” said Cardinal Peter Turkson, President of the Pontifical Council for Justice and Peace and senior advisor to Pope Francis. It aims to contextualise the message of the watershed 2015 encyclical and to generate practical commitments in stopping environmental degradation in Zambia.

Speaking to participants from the Church, government institutions, the private sector in mining and agriculture, concerned civil society organisations and many key stakeholders, Cardinal Turkson emphasized how the encyclical ‘touches on timely issues of the natural environment, as well as fundamental issues of faith, economy, natural resources, development, progress and lifestyle.’

In his welcoming remarks, Archbishop Telesphore Mpundu said that people had gathered at the conference to ‘mourn the destruction of the earth’. But Archbishop Julio Murat, the Apostolic Nuncio in Zambia, reassured the audience that not all was lost in saving the degenerated earth. It can be saved through correctional measures, small daily changes and decision making processes.

Probing questions, relevant to much of the sub-continent were posed by small groups:

Ms Kawandami, Minister of Lands, Natural Resources and Environmental Protection, said the government was cognisant of the work of the church in Zambia and that it fully shares the concerns raised by the Church on prudent environment management. However, in his closing remarks, Cardinal Turkson spoke out boldy, criticising governments for being short-sighted in vision, mission and character.  He pointed out that there is no interface from one government to another and they do not think of the long term consequences of their decisions.  Thus generations inherit huge financial and environmental debts. He urged participants to support governments whose vision goes beyond their mandate.

Reflections on Laudato Si’ have the potential to bring about a new level of consciousness about care for our “Common Home” and the community of life. The question is whether it has the power to mobilize courage and sufficient moral outrage that will translate into action?

Written for SAFCEI by Kate Davies