“There are no such places as remote areas. The Karoo is part of a sacred connected creation. “ Priscilla DeWet’s challenge stopped the CEO of Falcon Oil & Gas in mid stride. “To us fracking is like dropping a bomb on our church,” she continued. “We have a different world view. We do not see the Earth in dollars and rands.” To those of us concerned that the prospector’s presentation was an exercise in ticking the box of public participation before fracking the land, Priscilla’s statement was a breath of fresh air.

She agreed to an interview for Earth Keeper Newsletter to share her views on indigenous Khoe-San values and introduced herself as someone who has a deeply spiritual and personal connection with First Nations worldview. Priscilla is a descendent of the Chainaqua, a First Nation Khoekhoe group, from what is now called the Overberg in the Western Cape.  Her need to understand the customs of her African ancestors and to stand up for official and societal acknowledgement of the First Nations took her to the University of Tromsø in Norway where she completed a MA degree in Indigenous Studies. Here she met descendants of First Nations people from around the world who are facing similar struggles for dignity and recognition of their indigenous knowledge and ways of being.

While acknowledging the difficulties of many of the descendants of the First Peoples in South Africa regarding what to call themselves, Priscilla prefers the term Khoekhoe. “It means that you are only a person through 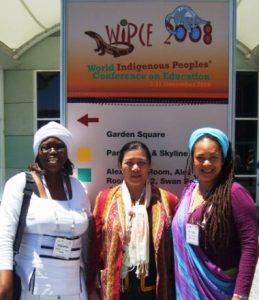 another person and expresses the core value of the nature of the interactive respect for fellow beings. It is similar in meaning to Ubuntu. The Khoekhoe believe in respect for all that God created. This respect also guided how people related to the plants, animals and the land they used.” The Khoekhoe were conscious consumers. Specific rituals ensured that collecting plant material for food and shelter and hunting animals happened in a sustainable way. Berries and bulbs were left for regeneration of the plant but also for their animal and bird neighbours on whom they depended for both food and knowledge about the world and their place in it.

Hunting rituals were performed to prepare the hunters but also to ask that an animal chooses to give itself up. The rituals reflected appreciation for the gift of its life.  Some of these rituals are depicted in rock paintings.  So much more than art, Priscilla calls them rock text. They capture in rich earth tones the essence of the relationships between the spirit world, humanity and our natural environment.

While I was still musing about the contrast between food as a gift and shoppers in a supermarket who rarely think about where their food comes from, Priscilla reminded me that the descendants of the First Nations no longer have access to most of their historical range.

“Do you know about the doctrine of terra nullius?  It comes from Latin and means land belonging to no one. The colonialist’s ideology of owning land and resources did not respect the ideology of the First Nationsaround the world, namely that all land belonged collectively to the beings using it.” This was fundamentally how the Khoe-San and the First Nations globally lost access rights to the land, Priscilla explained. They lived nomadic lives and did not need permanent agriculture or settlements, so the colonialists conveniently claimed the land was terra nullius and aggressively warded off attempts to use the land by its original inhabitants.  Land is more than a physical resource to the Khoe-San. Their spiritual wellbeing is dependent on their intimate connection with the land and the local deities and spiritual beings with which they interact.

There is discourse today that the Khoe-San’s light footprint on the land had more to do with low population density than with an ideology of respect. This line of discussion does not acknowledge the Khoe-San belief that all living beings had rights of use as part of a community of life. Their intimate knowledge of nature made it easier to see and experience the consequences of careless exploitation. Rituals that actively acknowledged spirit beings such as the water snake also taught people the rules of fair use.

In contrast we see all around us the unsustainable environmental destruction and psychological distress caused by a dominant worldview that replaced connection with nature with technological superiority and use of land and resources as financial assets.

How can we go back to values that encourage living as a community of people who respect each other and all of creation so that we use what we need rather than satisfying greed?

“There is no going back,” Priscilla answered, but if we are to learn from indigenous knowledge systems, we all need to reconnect with the land. The knowledge and value systems of our ancient hearts can take us into a sustainable future, if only we would listen. We need the stillness of natural landscapes to grow spiritually. The First Nations knew this and intuitively we also know this. Look up the Hopi Prophecy Stone, a rock engraving in Arizona, America, she advised.  It depicts the path of life splitting into two parallel ways after the arrival of the Europeans. The `Hopi way’ is shown as a narrow path of continuous life in harmony with nature.  The alternative way shows the path of technological achievement, the `western way’.  There are links connecting the paths to indicate that people can change on route, either joining the glamour of materialism along the `western way’or moving to the Hopi way’. Toward the end of the line on the `western way’the figures are depicted with detached heads and bodies and the corn is withered.  The `Hopi way’ shows a continuous line of healthy figures and corn until the arrival of the Great Spirit.

Priscilla believes that the detached figures in the `western way’ represent the growing disconnection between heart and mind symbolising the separation between people and nature.  She has a dream to establish a place of healing in Nature.  It would be a place where people can rediscover their ancient hearts and heal the disconnection between heart and head and people and nature. We wish Priscilla the fulfilment of her dream. We also urge our readers to join us in looking at the worldview that influences our relationships with others and with the broader community of life.  Is it one of respect and connection and rediscovering our ancient hearts?