Power for People: Nuclear is a moral issue

“As the youngest person in the room and someone who supports renewables, I believe it is fair for me to say: We need to think very seriously about how the future will have to deal with the energy decisions being made today.” Maloba Tshelha’s statement as spokesperson for Green Cape redirected the discussion on the implications of nuclear energy back to whom and what do we want future energy to serve. 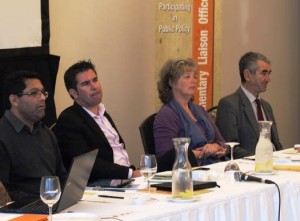 The roundtable hosted by the Catholic Parliamentary Liaison Committee on the 22th May 2015 included two speakers in support of nuclear energy and two who cautioned against (see speaker details below). The event was a restrained version of the longstanding pro vs anti-nuclear debate.  Faces at the meeting expressed frustration with the focus on competing technical facts. As a gathering of people of faith, the moral implications of a new nuclear build programme for South Africa are the key issues.

“Wake–up!” appealed Liz McDaid speaking for SAFCEI’s eco-justice programme. “Inform yourselves, your family and friends and act. Don’t be like the taxi driver in Gauteng who told me that the taxis should have acted as soon as the government proposed the e-toll system. Now they can’t afford the toll road.”  As individuals, as communities and as a country we simply cannot afford risky, costly, secret nuclear deals imposed on us, and which place our energy security in the hands of another country.  Andrew Kenny well known nuclear advocate admitted: “When I saw the photo of Presidents Putin and Zuma looking into each other’s eyes and shaking hands I felt really worried.  I support nuclear, but if the acquisition is likely to be corrupt, I would rather not have it.”

The emotional response of an increasing number of people to the proposed nuclear deals stems from a deep concern about the lack of transparency of the process.  We also know that new nuclear cannot address our country’s immediate energy requirements.  Nor will it provide the broad based power generation and economic opportunities offered by more flexible renewable technologies.  It is time for faith communities to take a moral stand and say No to nuclear energy.

The table below summarises some of the key moral issues.

Acknowledgements:  With appreciation to The Catholic Parliamentary Liaison Office for hosting the roundtable on `Implications of a South African nuclear build’.  The presentations were as follows. In support of nuclear energy: Shane Pereira for the Nuclear Industry Association of SA spoke about `A construction perspective for a nuclear build for South Africa.’ Andrew Kenny, engineering and energy consultant spoke about `Nuclear Power best for mankind & environment.’

Alternatives to and issues with nuclear energy: Liz McDaid, Energy consultant for SAFCEI spoke about `What legacy are we leaving our grandchildren.’ Saliem Fakir, Head of Policy Futures Unit WWF – SA spoke on `Implications of a South African nuclear build – what will it cost us?’

How you can help raise awareness and act to stop the nuclear build programme. You are not alone.  Many civic organisations including the unions, social, faith and environmental groups are taking action to oppose new nukes – but so far the government does not appear to be listening.  We all need to grow the circle of awareness and action.

Join a SAFCEI anti-nuclear vigil or start your own.  The vigils are held every Wednesday morning from 7:30 – 9:00 outside Parliament in Cape Town. For more information visit  http://earthkeeper.org.za/events/nuclear-energy-nuke-vigil-2/ or contact Liz McDaid, SAFCEI energy and climate change programme coordinator on  liziwe@mweb.co.za   or  Sarah sarah@safcei.org.za

Address your concerns or those of your organisation to the people in power below and copy your letter to the media:

President Zuma at president@presidency.gov.za  and Ms T Joemat-Pettersson, Minister of Energy via her secretary Olga.Maczali@energy.gov.za .  Ask for their mandates both from the South African public and in terms of our Constitution, the IRP and both the National Energy and Energy Regulation Act to make deals for nuclear procurement.  Appeal to both President Zuma and Ms T Joemat-Pettersson to stop the nuclear deals and to choose a renewable energy route which has immediate and broad based energy benefits.

Mr Nhlanhla Nene, Minister of Finance via his PA at Mary.Marumo@treasury.gov.za .  Appeal to Mr Nene to use his influence to stop the nuclear deals until an independent affordability assessment has been completed – and to request that all the costs are made public.

Mr Thembani Bukula, National Energy Regulator at Thembani.Bukula@nersa.org.za. Appeal to Mr Bukula to use his influence to stop the nuclear deals until an independent assessment of the implications for electricity tariffs has been completed – and to request that all the costs are made public.

Adv Thuli Madonsela, Public Prosecutor at customerservice@pprotect.org calling for her to investigate whether the nuclear build decision-making process is consistent with the constitutional values of transparency, fairness, efficiency and does not compromise the health of people or the environment.

Support SAFCEI’s SONA press statement.  “In recent lawyers’ letters to the Ministers of Energy, Public Enterprise and Finance, SAFCEI highlights that any nuclear procurement process based on the outdated electricity plan would be fatally flawed and irrational. SAFCEI’s lawyers argue that our legislative framework is incomplete and unsatisfactory.” Read more at: https://safcei.org/support-safceis-sona-press-statement/

Support SAFCEI’s letter  to South Africa’s finance minister the Hon. Nhlanhla Nene from our founding patron, Bishop Geoff Davies on 28th January 2015  “From an energy as well as financial perspective, we believe nuclear energy is going in the wrong direction. We encourage you to tell President Zuma – and Parliament – that our scarce financial resources should be prioritised for the empowerment of our people rather than nuclear energy.” Read more at: https://safcei.org/dear-minister-nene/

For more information go to: Stop nukes. Prevent democracy meltdown. “The prosperity of all South Africans is based on a democratic system true to the principles of listening to and meeting the real needs of the citizens and a national treasury that is accountable and funds these needs. Yet, right now, a nuclear programme valued in excess of R1 trillion is being promoted by President Zuma and negotiated by government officials and foreign business interests without a proper mandate from the National Development Plan or the Integrated Energy Plan (Draft).” Read more at:https://safcei.org/stop-nukes-prevent-democracy-meltdown/

Appeal to minister over DoE’s refusal to reveal nuclear secrets. “SAFCEI has briefed the Open Democracy Advice Centre (ODAC) to assist with their request for access to information. SAFCEI had also asked for a copy of the authorisation given to the Minister to allow her to enter into a nuclear agreement.”  Read more at: https://safcei.org/appeal-minister-refusal-reveal-nuclear-secrets/

Safcei’s board members at a Nuclear Vigil outside parliament. YouTube Video   https://www.youtube.com/watch?v=BObkyTaMt-w

We’re taking the Energy Minister to court: Greenpeace “Greenpeace Africa announced it has filed papers in the Pretoria High Court to compel the Minister of Energy to update the country’s completely inadequate nuclear liability regulation.”  By SAPA – February 27, 2015  http://mybroadband.co.za/news/energy/120560-were-taking-the-energy-minister-to-court-greenpeace.html