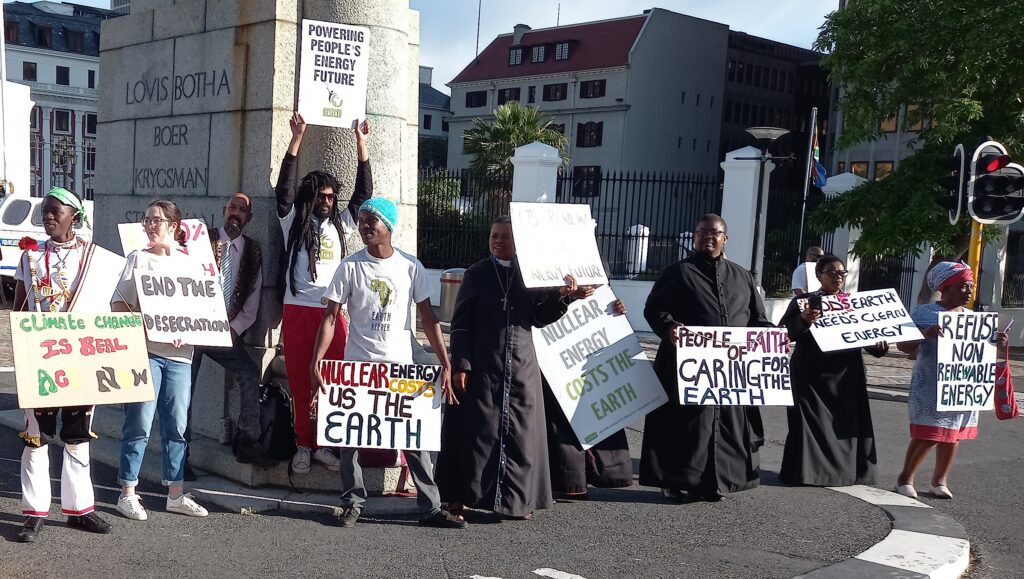 Faith leaders outside Parliament on a Nuclear vigil.

On 1 November 2022, twenty faith leaders from around South Africa gathered to deepen their knowledge and experience in eco advocacy.

This was the third time the group had gathered in 2022, and everyone was excited to learn how the training would unfold. The series of workshops is a collaboration between Safcei and The Green Connection, inspired by the successful opposition to the South Africa-Russia nuclear deal by Liziwe McDaid and Makoma Lekalakala of Earthlife Africa.The focus of the Advocacy Training is to ensure a nuclear-free future for South Africa.

Participants demonstrating the negative impacts of nuclear power on our environment.

The highlight day for our group was Wednesday, 2 November. We started early, arriving at the gates of Parliament for a vigil aiming to bring attention to eco justice, and particularly a stop to nuclear energy. We asked people to hoot for climate justice – and they did!.

Ricardo Swanepoel representing the Rastafarian faith at the nuclear vigil outside parliament.

Most of the group then went inside  Parliament, where they were thrilled to observe a Portfolio Committee sitting at which Eskom’s CEO, Andre de Ruyter, was presenting.

Currently, our attention is on the life extension of Koeberg Nuclear Power station, which is due to be decommissioned in 2024. However, Eskom and Energy Minister Gwede Mantashe have been pushing hard for Koeberg’s life extension citing the loss of power to the grid should we lose the nuclear facility. This despite Koeberg’s minimal contribution to the grid.

Although the answers were not what we hoped for, the experience of being in Parliament, listening first-hand to major role players and observing the parliamentary proceedings, was a highlight for the entire group. 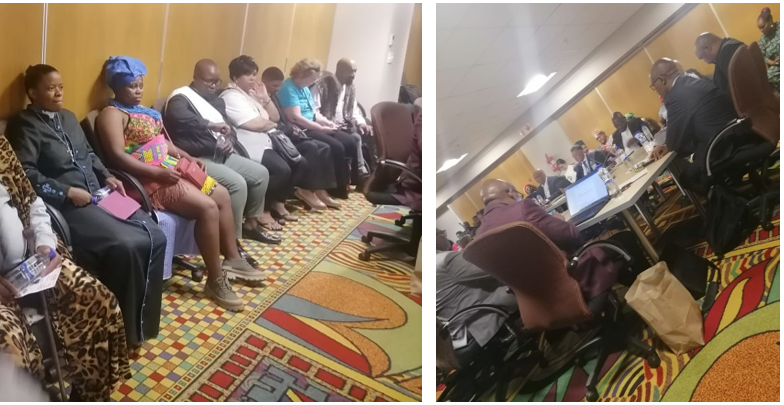 Faith leaders at the Portfolio Committee sitting in Parliament.

Meanwhile, some of the group left Parliament to head down the road to Groote Kerk, where a civil society gathering was in progress to plan an action against the Draft Electoral Amendment Bill. Those who attended reported back later that they were horrified to learn how locked into political party politics South Africans would be if the Bill was passed, and how our choices and freedoms were being eroded by bills such as this one.

A third meeting was taking place in Cape Town that day, and it was attended by SAFCEI’s Faith Leader Liaison, Rev Berry.  Rev Berry reported back to the group afterwards that she had been introduced to resources our faith leaders could use. For instance, the SA Human Rights Commission and Legal Aid organisation would both be open to conversations when eco justice was being violated and people’s rights to a safe and healthy environment (as per Section 24 of our Constitution) were being compromised.

The diverse activities of the day, brought back into the same room for discussion and sharing, helped us to realise that we all hold pieces of the puzzle and when we pool our knowledge and experience, we are so much stronger, wiser and more resilient.