Our nuclear campaign has bounded ahead in these last weeks and SAFCEI marked several momentous occasions.

The most exciting one was the launch of our court action, which was officially announced on 15th October. Together with Earthlife Africa Johannesburg (ELA-Jhb), SAFCEI held a press briefing in Johannesburg about our joint challenge of the various aspects of the nuclear procurement process.

We believe that the minister has failed to put the necessary processes in place to ensure that the nuclear procurement deal is conducted lawfully and meets the requirements of the constitution for a fair, equitable, transparent, competitive and cost effective process. Our efforts in calling upon government to engage transparently with the public on the proposed nuclear procurement, and to follow due legal process regarding it have fallen on deaf ears, thus we have arrived at this legal challenge.

This court case is the fruition of a decision that was taken at a SAFCEI Board meeting in October 2014 where it was elected to seek legal counsel to investigate the nuclear contracts which South Africa had signed. SAFCEI approached Adrian Pole Attorneys, who, assisted by the Legal Resources Centre (LRC), is now running the case for SAFCEI and ELA-Jhb. 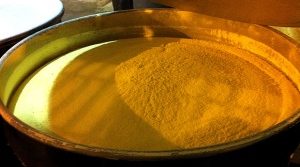 October 2014 was also the beginning of SAFCEI’s nuclear vigils outside parliament and on the 21st October we marked a year of our #NukeVigil. Many friends came to commemorate this occasion with us and we honoured this anniversary with yellow cake, in a symbolic allusion to uranium yellowcake.

Yellowcake is the term used for the product that emerges after uranium bearing rocks have been crushed and soaked in an acid solution to leach out the pure uranium. This coarse powder is then processed further to produce the nuclear fuel used in power stations.

The yellow cake was handed out together with the special recipe of disaster the government is following in pursuing this nuclear path: 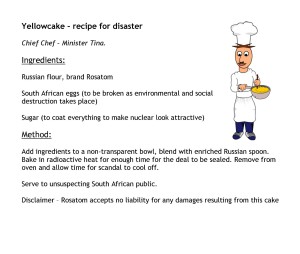 The International Renewable Energy Conference (SAIREC) that took place in Cape Town at the beginning of October was also a positive moment for our campaign. It confirmed again that nuclear is not needed to meet South Africa’s energy needs. South Africa’s burgeoning renewable energy programme is a cause for celebration as it is more than capable of providing the solution to South Africa’s energy crisis.

The German Energy Minister, Baake, advised South Africa to go renewable: “If you want to have expensive electricity you buy nuclear generators, if you want dirty electricity you burn coal. If you want clean energy in the long run that will be cheaper, you transfer to a renewable system, but the decision has to be made by your own government.”

As this evidence keeps stacking up, we hope that the South African government sees the light – in more than one sense! But in the meantime we need your help with making sure this court case is successful.

We have raised nearly a million in funds but still need to raise another R500 000 to effectively fight this case. We ask you to make any kind of donation – no amount is too small. Or add your voice to ours at our weekly #NukeVigil in Cape Town and Pretoria.

In order to keep everyone informed on the progress of our court action and campaign, we have also set up a separate site for all our nuclear news and updates. Take a look at www.nuclearcostssa.org and stay up to date with our progress.

Marking one year of #NukeVigils