No End to Threats to the Karoo

Older inhabitants of the Central Karoo remember that in the 1950s the area around Beaufort-West in the Karoo was once the scene of busy uranium mining. Then mining rights changed hands several times and eventually lapsed; thus few people paid attention to recent plans of reviving these mines. However in 2009, without much public attention, the Government granted several foreign investors prospecting licenses for more than 700,000 hectares. Now, six years later and with favourable results from more than 10,000 boreholes across the Karoo, the threat of mining uranium in the Karoo suddenly raises its ugly head again. Tasman Pacific Minerals Limited and Lukisa JV Company are subsidiaries of Peninsula Energy Limited, a small Australian company. If you are concerned about fracking in the Karoo, you should be even more worried about uranium mining! 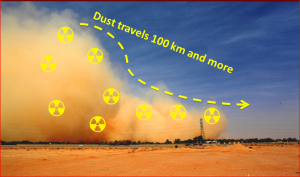 This hugely toxic and radioactive mineral is one of the biggest threats to humankind. Everyone knows the terrible impact nuclear bombs have had on the Japanese people. After the nuclear disaster of Fukushima, several countries reviewed their energy policies. But few people are aware of the permanent damage that comes from mining this deadly element. Mining in itself is a dirty business and impacts widely on the environment. Uranium mining, however, is in a class of its own. This heavy metal is of course radioactive and highly toxic, even at very low concentrations. Lung cancer, leukaemia, stomach cancer and birth defects are some of the diseases most often to be found as a result of uranium mining. There are no “safe limits” to radioactive contamination. Even a single grain, inhaled into the lungs, can create lung cancer. To make matters worse, uranium in the Karoo is usually very shallow and in soft and bone-dry sediments. During the digging and transportation of large quantities of sediments across gravel roads, large clouds of dust are created that can travel for many miles in the strong winds of the Karoo. Once dust particles are inhaled, the radioactive elements which stick to these specks, stay in the lungs and can cause damage. In addition, huge amounts of groundwater will have to be pumped out of the ground for use in the liquid processing of the ore to produce the so-called “yellow cake”.

The company plans to create a Central Processing Plant just outside Beaufort-West. Ores would be shipped by truck on hundreds of kilometres of public roads, which in this area are often in poor condition. Mining and processing are expected to use up some 700.000 m³ of fresh water every year in this already severely water-scarce area. Adjacent farms and communal water supplies could be affected by the withdrawal of such large volumes. The Karoo National Park near Beaufort-West would be affected, as many conservancies and farms in the area. 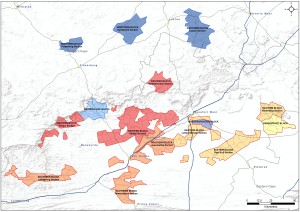 Large areas of the Central Karoo are earmarked for uranium mining

Few people in the region have yet taken notice of this threat. Even less participated in the Environmental Impact Assessment. 30 years of mining rights may be issued as early as next year! It is high time that the people of the Karoo rise to this challenge and make their concerns heard in the forthcoming participation process.

With all the discussion about the nuclear built programme to acquire new nuclear power stations we sometimes forget where all the raw material comes from in the first place. Uranium mining has dramatic impacts world-wide on communities around mining sites and on mine workers themselves.

Imam Omar’s words from his recent sermon ‘Questioning South Africa’s Nuclear Path’, now seen in the light of the uranium mining that will need to take place if nuclear is implemented, couldn’t be answered more resoundingly.

“[T]he critical question that confronts conscientious Muslims and responsible South African citizens is to consider whether the advantages of our use of nuclear energy to resolve our country’s energy crisis outweigh its destructive potential?”

The Western Cape Religious Leaders Forum also raise this pertinent point, when they wrote to President Zuma: “A nuclear energy future will leave generations of South Africans with a toxic radio-active legacy to manage.“

The Karoo with its world-class sites for wind and solar energy should be the place to develop a sustainable future for South Africa, not the site of mining of an out-dated and destructive mineral like uranium.

Dr Stefan Cramer (stefancramer@gmail.com) is based in Graaff-Reinet and is SAFCEI’s Science Advisor

SAFCEI’s lawyers are engaging with the Minister of Energy, but (depending on the response received, if any) in the interim are gearing up to launch a High Court application aimed at ensuring that the procurement of nuclear power plants does not occur in a corrupt or otherwise unlawful fashion.

SAFCEI has also employed ODAC to assist with a PAIA request. The Promotion of Access to Information Act (PAIA) gives citizens and non-citizens a legal right to get information held by government entities and private corporations. SAFCEI has requested information regarding the nuclear framework agreements.