More than a special gift 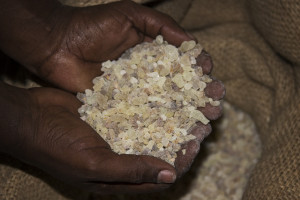 And when they were come into the house, they saw the young child with Mary his mother, and fell down, and worshipped him: and when they had opened their treasures, they presented unto him gifts; gold, and frankincense and myrrh.

Frankincense and myrrh are most often associated with Christianity, as in the verse above, where the three wise men gave them as gifts to the Christ child. However these two incenses are also found in the history of other religions.

The ancient Greeks and Romans also used these incenses during cremation and the Babylonians and Assyrians burned them during religious ceremonies. Indeed, the most common use for myrrh and frankincense is in the form of incense with the Hebrew Bible mentioning frankincense and myrrh as components of the holy incense ritually burned in Jerusalem’s sacred temples during ancient times.

Frankincense, also known as olibanum, is the resin of the Boswellia carterii tree, whilst myrrh is obtained from the tree Commiphora myrrha. These trees often grow in remote areas of Somaliland, Somalia, Kenya, Ethiopia and across the Gulf on the Arabian Peninsula.

The sap, once dried, is harvested. Photo: Ulrich Feiter

Myrrh and frankincense are obtained by cutting a circular hole in the tree with a specially shaped tool called the ‘mingaf’ and waiting for the sap to ooze out. Once this resin is dry, which takes anything between 10 – 15 days, it is harvested and the tree cut again to bleed out more resin. In a good year, a tree may yield 300 – 500g.

Both myrrh and frankincense have a long history of use not only as an incense but also for their medicinal properties. They are said to help ailments as varied as inflammation, indigestion, arthritis, bronchitis, leprosy or cancer.

It is therefore said that they were not given to the Christ child merely as incense but as powerful healing agents. These substances were worth their weight – if not more – in gold at the time, the third gift from the three wise men.

Whilst the value of frankincense and myrrh is no longer as high as it was thousands of years ago, it is no less precious and is still widely used.

So whether you are celebrating Christmas or not, frankincense or myrrh can add a blessed element to your home this season. Frankincense is said to lift the spirit and focus the mind, allowing us to find perspective and get our direction straight. Myrrh, on the other hand, has the capacity to ground and centre the spirit. Christian and Islamic Abrahamic faiths have used frankincense mixed with oils to anoint newborn infants, initiates and members entering into new phases of their spiritual lives.

Both are also known to have cleansing properties, so for a fresh start into the New Year, burning either incense could help you usher in 2016 on a healthful note.