Lessons in geology and advocacy in Graaff-Reinet

We have often featured articles on Dr Stefan Cramer’s work in the Karoo, firstly on fracking and now on the new danger of uranium mining. But what lies behind these reports and more technical articles that we have shared with you?  I had the privilege of visiting Stefan and his wife, Erika, and experience first-hand how they work and achieve the milestones they have.

Stefan and Erika, who come from Germany, were well acquainted with the African continent and advocacy work when they moved to Graaff-Reinet to do work on SAFCEI’s behalf. Stefan and Erika have spent most of their lives working on social and environmental issues in various countries, including South Africa, Nigeria, the Philippines and Nepal.

Working in and against the nuclear landscape was also not something new. Already as a student Stefan says he had protested against nuclear in his home country and in their first stint in South Africa, the Cramers helped former Pelindaba employees who are struggling with health issues to claim compensation for radiation damages.

But to really understand how Stefan, together with Erika, goes about his work in the Karoo, one also has to understand something of Stefan’s area of expertise and passion: geology. Stefan’s initial work on fracking – and his conviction that fracking was not feasible in the Karoo – has its foundation in the dolerites that can be found snaking through the shale and sandstone layers of the hills, ridges and valleys of this place.

Dubbed by Stefan as the ‘Guardians of the Karoo’, these dolerites play an interesting role, capping and protecting many mountain ranges from full erosion and acting as conduits of water underground. In pushing through the layers of sandstone and shale many million years ago ago, these dolerites also naturally fracked the Karoo, releasing a lot of the gas that Shell wanted to exploit.

So it is these dolerites that essentially have protected the Karoo from being a viable fracking area, as has been confirmed by Shell’s apparent withdrawal at this point.

Whilst the dolerites don’t have the power to protect the Karoo from uranium mining, it is still the landscape and conditions that Stefan bases his arguments on against this form of mining. The dry and windswept landscape make it all too easy for uranium particles to be blown across vast swathes of agricultural and sheep-grazing land and into the small towns.

This type of mining also requires large amounts of water – some 1.4 billion million litres annually – which the people of the Karoo do not have enough of themselves! Furthermore the lack of proper infrastructure – part of the Karoo’s charm – also bodes badly for the proper management that uranium mining requires. As is so succinctly summed up by Stefan, uranium mining is ‘the dirty underbelly of the nuclear cycle’. Yet it is not treated as such, blithely grouped together with other forms of mining.

Why this is so is embedded in the history of nuclear and uranium mining in Africa where political manoeuvring not scientific fact put it in the realm of ordinary mining and not under the regulatory umbrella of nuclear, where it belongs.

The other big component of the Cramer’s work is being rooted in the community and reaching out to all the stakeholders. With me in tow they visited a big farm outside of the Graaff-Reinet, where we are warmly welcomed by the farmer and his wife; gave a presentation to emerging farmers in Murraysburg; popped in at the pastor of the Dutch Reformed Church in Nieu Bethesda and met up with the artists that made the beautiful quilt that tells of the terrible consequences fracking would have for the Karoo (also featured on SAFCEI’s 2014 annual report).

Beyond the technical and scientific fact in which Stefan roots his work, engaging on other levels of understanding is also important. Erika especially has a long history of being part of and organising creative demonstrations and the Cramers have engaged artists to explore the issue of fracking and renewable energy which are featured in the Karoo Transvisions in Energy exhibition they put together in Graaff-Reinet.

Inspiring young Earth Keepers is also a large part of Stefan and Erika’s work in the Karoo. And by the way they talk about their engagement with the local school children, it is this aspect of their work that brings the most joy. Here Stefan is able to pass on his knowledge and passion for the geology of the Karoo and awaken a new appreciation for the landscapes surrounding them. 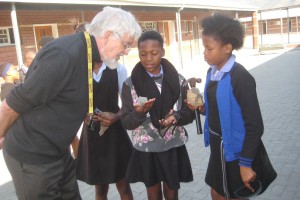 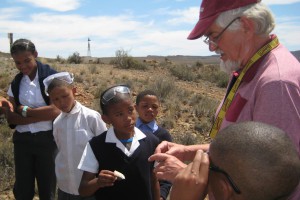 Indeed, I was quite inspired by my short stay and now look at the Karoo in a new light. It is my prayer that when the Cramers leave and return to their home town in Germany at the end of this year, that they leave behind a new set of Guardians of the Karoo! 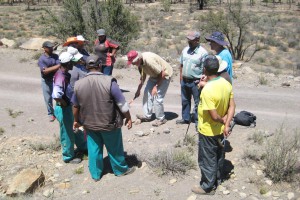 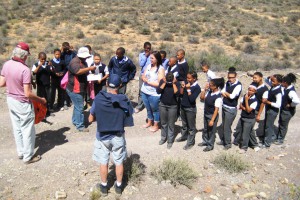