Who holds the power?

The Department of Energy (DoE) has responded negatively to the Promotion of Access to Information Act (PAIA) application of the Southern African Faith Communities’ Environment Institute for information regarding the nuclear framework agreements. According to the DoE, “the record of decision by Government of the Republic of South Africa to procure 9.6GW of nuclear energy power as part of the energy supply” was denied because “the release of records would jeopardise or compromise the delicate process that is still ongoing regarding the new nuclear build programme”.

It is with grave concern that SAFCEI received this response, particularly as the energy planning process to determine if South Africa should include nuclear in its energy mix is well underway through the preparation of the DoE’s Integrated Energy Plan (IEP), which includes public consultation.  “The IEP draft released for public comment last year, as well as the National Development Plan for the country, have questioned the need for new nuclear.  So why is there a need for an ongoing non-transparent, secret “delicate process” about the nuclear build?””, queries SAFCEI’s vice chairperson, Moulana Riaz Simjee.

The DoE has refused SAFCEI access to any document that authorised the Minister to sign a nuclear framework agreement with the Russian Federation, stating that “this record is part of the framework Agreement on nuclear cooperation with the Russian Federation, of which its release of records would jeopardise or compromise the delicate process that is still on-going regarding the new nuclear build programme”. “This suggests that the decision on whether South Africa should build more nuclear power stations is driven by deals that are being struck with a Russian nuclear company.  Are we handing over the power to decide our energy future to foreign businesses? ” asks Mcdaid.

“To make energy choices based on foreign business interests is a disturbing cart-before-horse approach to energy planning. It is unacceptable to allow Rosatom and other parties to determine South Africa’s energy mix. Such secretive deals clearly raise the spectre of corruption. International vendors are not charities and will negotiate deals that provide them with the best returns.  “Our energy security will be compromised and the people of South Africa will be left powerless” states SAFCEI’s board member, Buddhist Ani Tsondru.  “Our democracy is at stake”.

SAFCEI is investigating further legal action, whilst calling on cabinet to ensure transparency, with due diligence studies, and requesting parliament to hold government to account and demand answers. 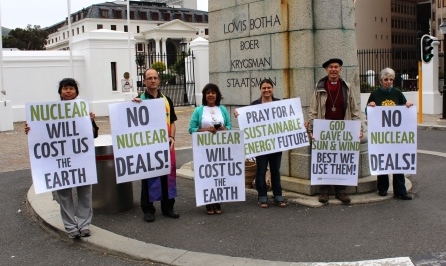