Yesterday (9 May), the Southern African Faith Communities’ Environment Institute (SAFCEI) joined 62 major animal protection organisations from around the world to celebrate the overnight success of a global campaign calling on hospitality group, Hilton Worldwide (Hilton) to follow the industry standard and commit to sourcing 100% cage-free eggs worldwide. The campaign – which launched on Wednesday 8 May – also targeted Best Western International Inc. (Best Western) simultaneously, in a bid to end the abuse of chickens worldwide. However, only Hilton has responded to the campaign thus far. 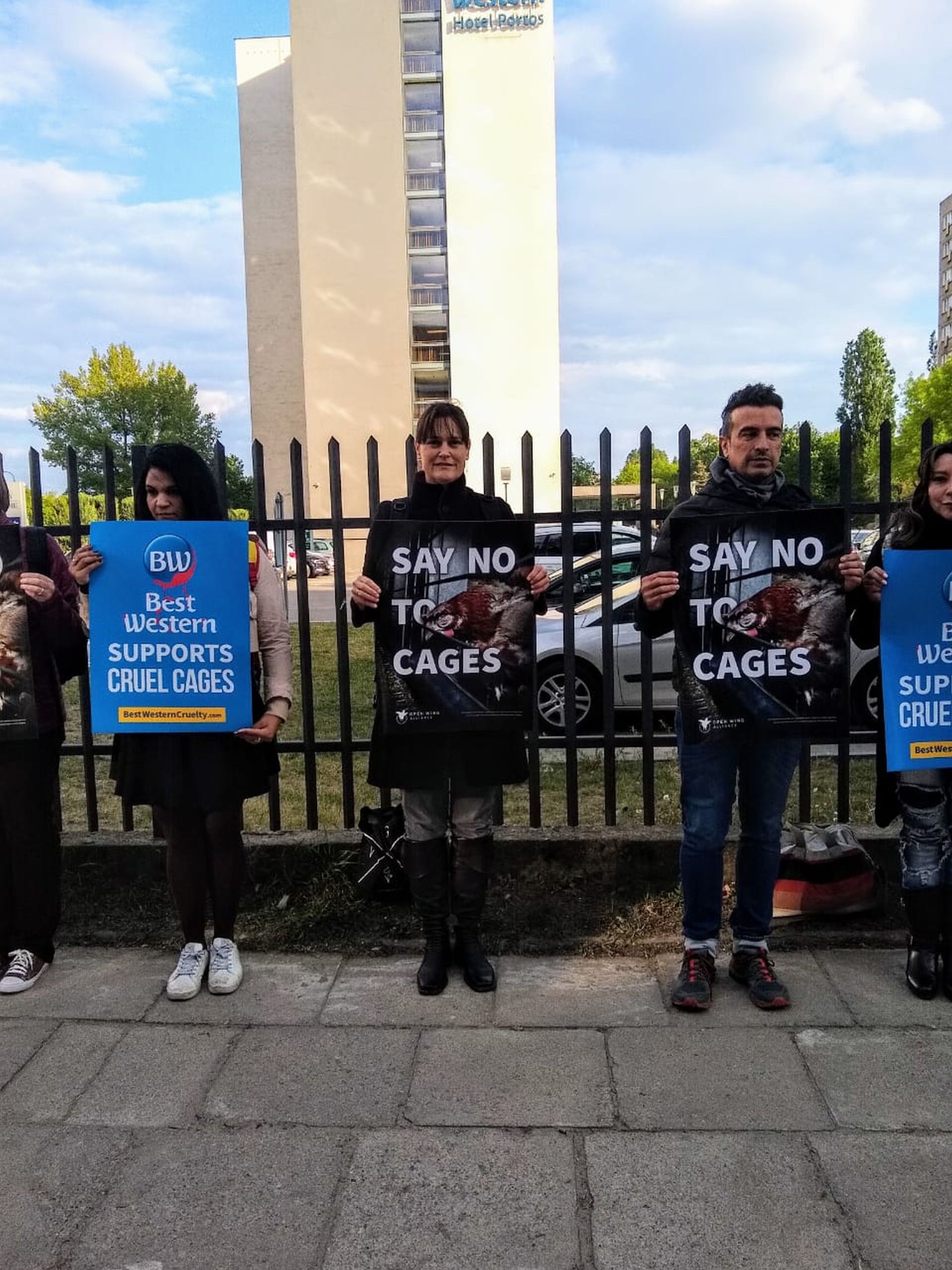 SAFCEI’s Executive Director, Francesca de Gasparis (pictured in the middle) protests Best Western’s use of factory farmed eggs, as part of the Global Cage-Free Summit in Poland on 8 May. The group has operations in over 100 countries (including South Africa), but only has one cage-free commitment in France.

SAFCEI’s Campaign Lead, Mandla Gqamlana says, “Hilton is a prominent hotel and resorts group that is a self-proclaimed “leader of hospitality”.  While it has made cage-free commitments for some of its brands in 19 of the 106 countries in which it operates, South Africa was not included. Furthermore, up to now, Hilton has refused to expand its commitment globally nor has it fulfilled any of its other commitments. But now, with its commitment to go cage-free by 2025, we are one step closer to ending cruelty against these animals.”

“The overnight success with Hilton is a clear indication that going 100% cage-free is possible. But, consumers and the public must continue to speak out and put pressure on corporations, such as Best Western (which is yet to respond to the campaign). We must keep demanding better conditions for the animals that feed us, because it is not only about animal cruelty, but also about the risks to human health and the environment that are associated with factory farming practices,” says Gqamlana.

SAFCEI’s Executive Director, Francesca de Gasparis – who is currently in Poland for the Global Cage-Free Summit – says that both Hilton and Best Western have fallen behind on animal welfare commitments and the cage-free movement at large. “While cage-free has become the new global standard, both of these hospitality companies continue to support extreme animal cruelty in their global egg supply chains. Best Western operates over 4,200 hotels and resorts across 13 brands worldwide and prides itself in being “a global family of hotels.” With operations in over 100 countries, up to now the group only had just one cage-free commitment in France.”

“SAFCEI has long been advocating for the ethical treatment of egg-laying hens, and with great success. Through partnerships and coalitions such as with the Open Wing Alliance (OWA), a number of well-known international brands with operations in South Africa have committed to going cage-free by 2025. This includes commitments from McDonald’s, Marriott Hotels and Famous Brands restaurants,” says de Gasparis.

“As leaders in the global hospitality industry, Hilton Worldwide and Best Western International, Inc. have the responsibility to adhere to the global animal welfare standards being established by other hotel groups, including Marriott International, Wyndham Worldwide, AccorHotels, and InterContinental Hotels Group,” says Alexandria Beck, Director of the Open Wing Alliance. “We are pleased that Hilton has agreed to do the right thing—listening to the thousands of concerned people and consumers represented by our 63 member organizations. We urge Best Western to follow suit.” 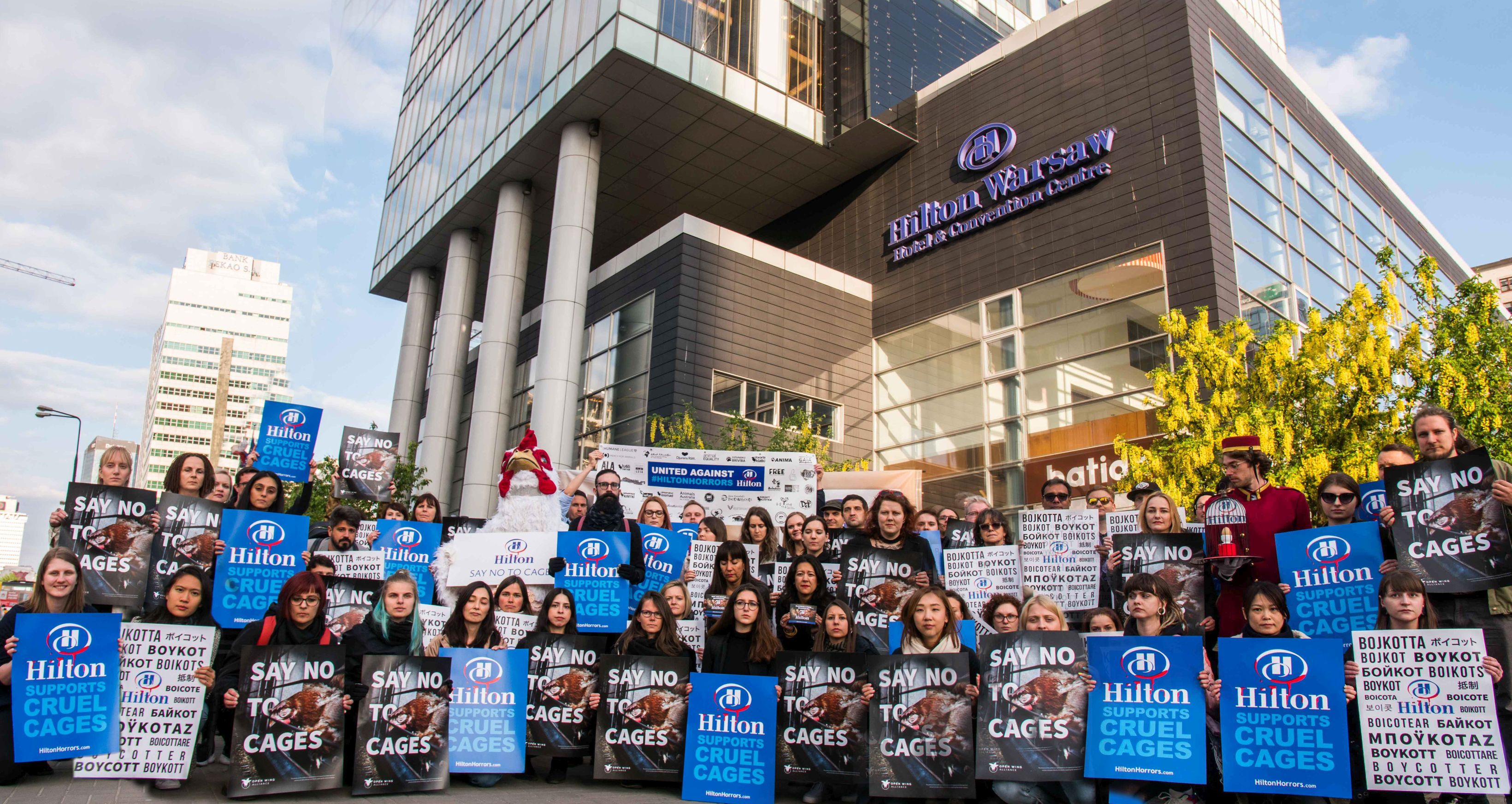 PHOTO CAPTIONS 2-4: Following the call from 63 animal protection organisations from around the globe, hospitality group Hilton Worldwide committed (on 9 May) to adhere the industry standard and source 100% cage-free eggs for its operations by 2025 – just one day after campaigning started. 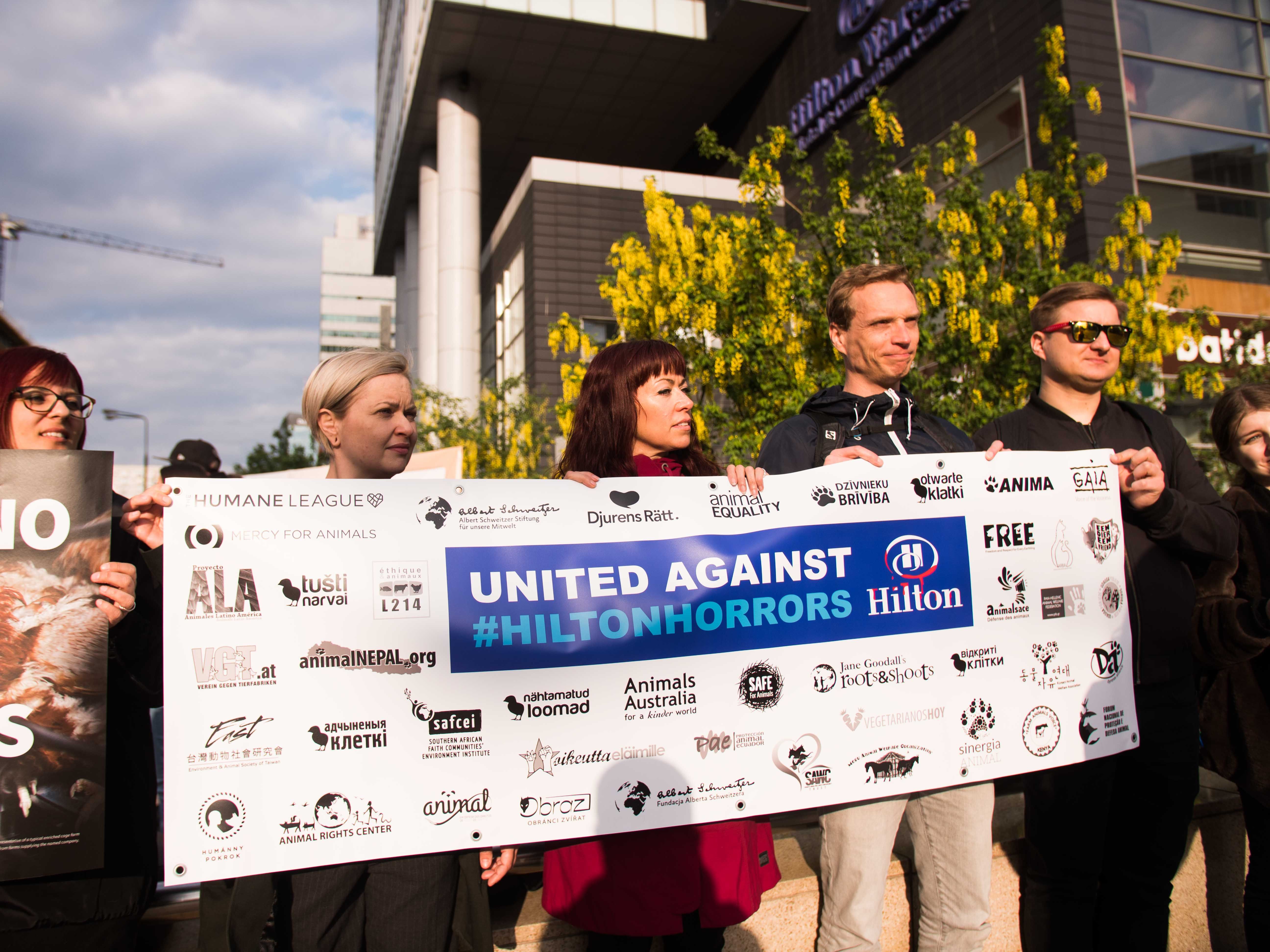 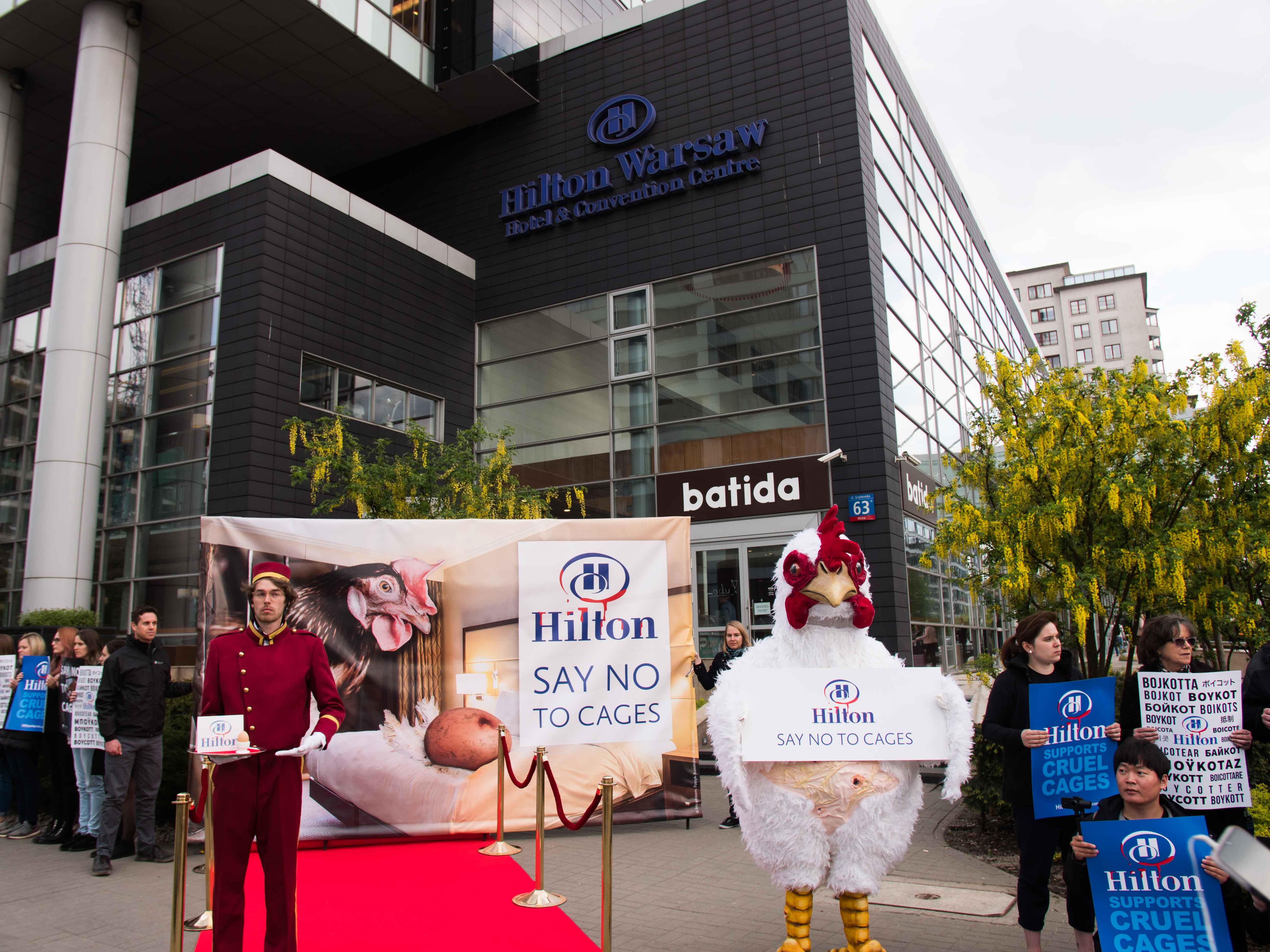 The eggs in Hilton’s and Best Western’s global supply chains come from farms that confine hens in tiny, filthy cages; each hen gets space no larger than the size of an iPad. These cages are so small and packed with birds that the hens are unable to exercise any natural behaviors that are important to them including laying eggs in nests, dust bathing, or even fully spreading their wings. Caged hens will never get to experience the sun on their back or grass between their toes. Often, their body parts are caught in the caging, which results in fractured or broken bones, deformities, and severe feather loss. Some hens, exhausted or unable to move, are trampled to death by their cage mates.

Over 1,500 companies around the world are ditching cages, and consumer demand for cage-free eggs is growing. International commitments to end cruel cages are being made by some of the largest companies in the world, including Marriott International, AccorHotels, InterContinental Hotels Group, Carnival Corporation, Norwegian Cruise Lines, General Mills, Unilever, Nestle, Lidl, Aldi, Aramark, Sodexo, and Compass Group.

Hilton and Best Western, however, have failed to join this movement towards better treatment of animals globally. Currently, the farms that supply caged eggs for Hilton and Best Western are so bad that even low-end fast food chains and many US prisons have pledged to move to cage-free eggs with higher animal welfare and higher food standards.

The Open Wing Alliance is launching this official campaign with two Change.org petitions, social media actions and advertisements, which can be tracked via the hashtags #HiltonHorrors and #BestWesternCruelty. Thousands of activists from around the world will be participating in protests, community outreach, and online activism asking Hilton and Best Western to commit to going cage-free.  For more information, visit www.HiltonHorrors.com and www.BestWesternCruelty.com.

Issued by Natasha Adonis, on behalf of SAFCEI and the Open Wing Alliance (Hilton-Best Western Cage-free Campaign). For more information, contact Natasha on 0797-999-654 or natasha@safcei.org.za.