The FLEAT (Faith Leader Environmental Advocacy Training) Malawi group met online for a follow-up workshop from 24-26 August 2021. In the first workshop, held in March this year, a six-month activity plan was developed by the group which they provided feedback on during the second meeting.

The FLEAT Malawi group is made up of 15 males and 8 females from a diversity of faiths that include various Christian denominations, Islam, Baha’i, and Rastafarian.

We started the first day with a prayer, which was followed by presentations from the three different groups representing three areas from Malawi. The first group reported that they have planted 300 trees and work with the Tiwale Youth Organisation in Malawi and mounted an irrigated woodlot in Machinga District. More tree planting is planned for the rainy season. They have also had three clean-up campaigns, two in Lilongwe and one in Machinga.

Many of our FLEAT members attended the Strategic Planning of the National Youth Network on Climate Change (NYNCC) on 21 April coordinated by our FLEAT 2 Regional Member, Dominic Niyasulu, where the guest of honour was Hon Nancy Tembo MP, Minister of Forestry and Natural Resources. 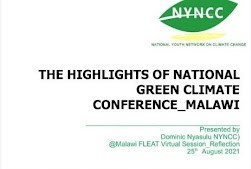 On day two, Dominic took us through the programme of the National Green Climate Conference that took place at the same time on 25– 26 August. This was an opportunity for faith leaders to identify the gaps within civil society organisations that were not inclusive of faith leaders in the government spaces.

The group welcomed the informative presentations by SAFCEI programme coordinators, Georgina Blumears on the Cage-Free Campaign and Gabriel Manyangadze on the Food and Climate Change Governance Structures research in Malawi.

At the end of the workshop, the participants did a presentation of how they saw FLEAT Malawi moving forward as a multi-faith network. We, SAFCEI, welcome the plans of the group as they move forward with our continued support.