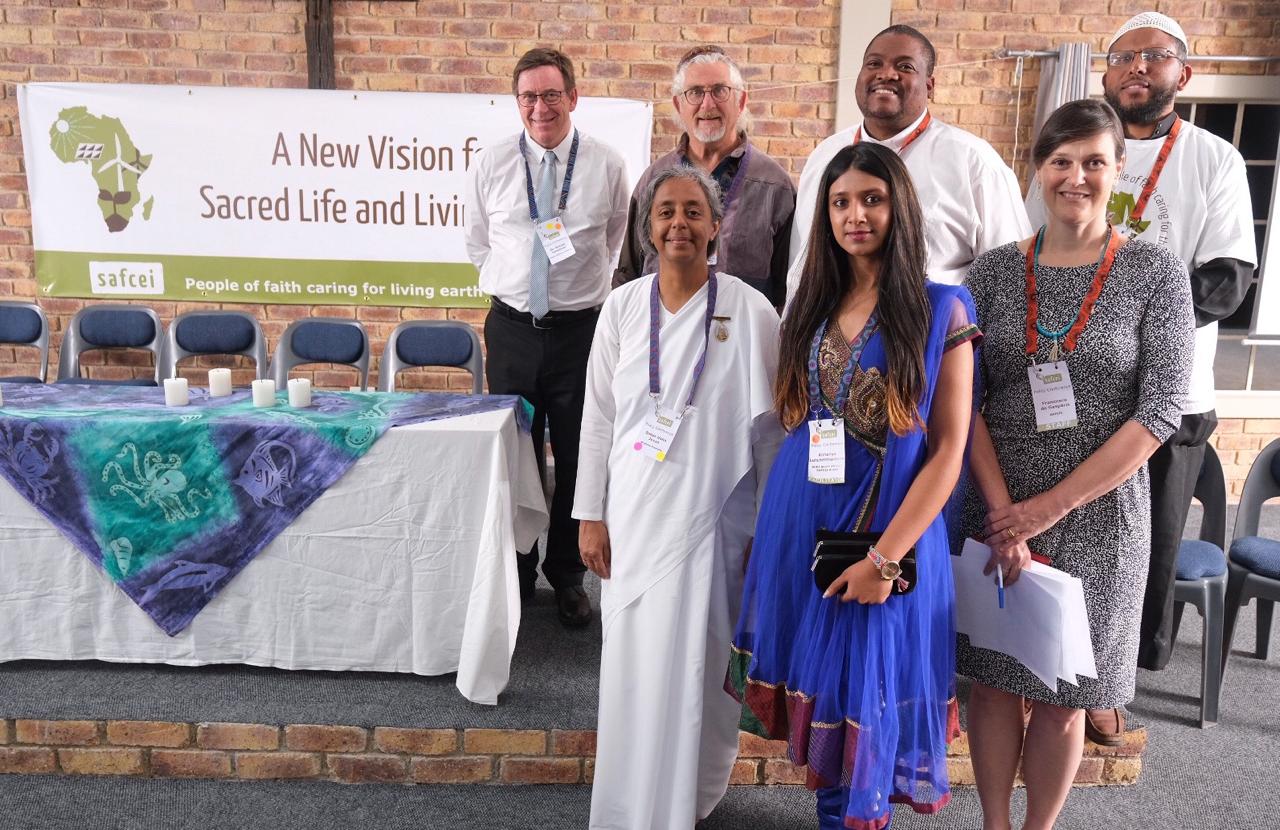 Faith leaders from eight countries in Southern and Eastern Africa gathered in Johannesburg this week (5-7th November) to examine our mandate regarding climate crisis and ecosystem collapse, caused by our destructive economic systems and selfish disregard for the community of life. The Southern African Faith Communities’ Environment Institute (SAFCEI) brought together 90 faith leader participants, from a rich variety of faith groups, for two days of deliberations.

The result of fruitful exchanges in six sessions was consensus for a Declaration that emphasised the urgency to petition governments and corporations to wake up to the harsh reality of the climate crisis, and desist from practices that continue to destroy the natural world. The Declaration asserts that the limitless growth model has exhausted the world’s natural systems, and increased inequality, and the global human health pandemics of both obesity and malnutrition.

Marking ten years since faith leaders gathered in Johannesburg under the SAFCEI umbrella to call for an urgent response to climate change, Francesca de Gasparis, the Executive Director of SAFCEI states: “Atmospheric carbon dioxide is higher now than it has been for hundreds of years due to human activity. Our rivers and oceans are choked with plastic and scientists tell us we are in the midst of a mass extinction of species. This is the first global extinction caused by human behaviour. The natural world has reached a tipping point and the window of opportunity to act is rapidly closing, some climate scientists believe we will no longer be able to stop runaway climate destruction”.

“Science has repeatedly warned us about the excessive degradation of ecosystems, such as forests and grasslands, as a result of the unfettered use of fossil fuels for energy generation. Yet, our collective response has been to wilfully ignore and disregard the science. Instead, governments and industry are making greater investments in fossil fuel exploration and production”, states SAFCEI board member, Moulana Shuaib Appleby.

“When the availability of science is unable to change the self-destructive trajectory, people of faith have an ethical obligation to speak out against immoral action, and to inculcate respect for life and change in behaviour in their communities,” stated the founding Green Bishop and Patron, Geoff Davies.

Six themes on environmental justice were discussed and debated during the conference, of: biodiversity; energy and climate; food and climate; land and water; consumerism and waste; and animal justice.

The resulting Declaration highlights the sacredness of all life, and the imperative for us to care for our common home. It continues that the urgency to change our current destructive trajectory includes: a redress of the global industrialisation of food systems; an end to the commodification of animals to meet human demand, including factory farming and other cruel and exploitative practices; a just transition from fossil fuel extraction to renewable energy; and a repair of our sacred connections to land and water, in which governments commit to equitable land access, whilst protecting biodiversity.