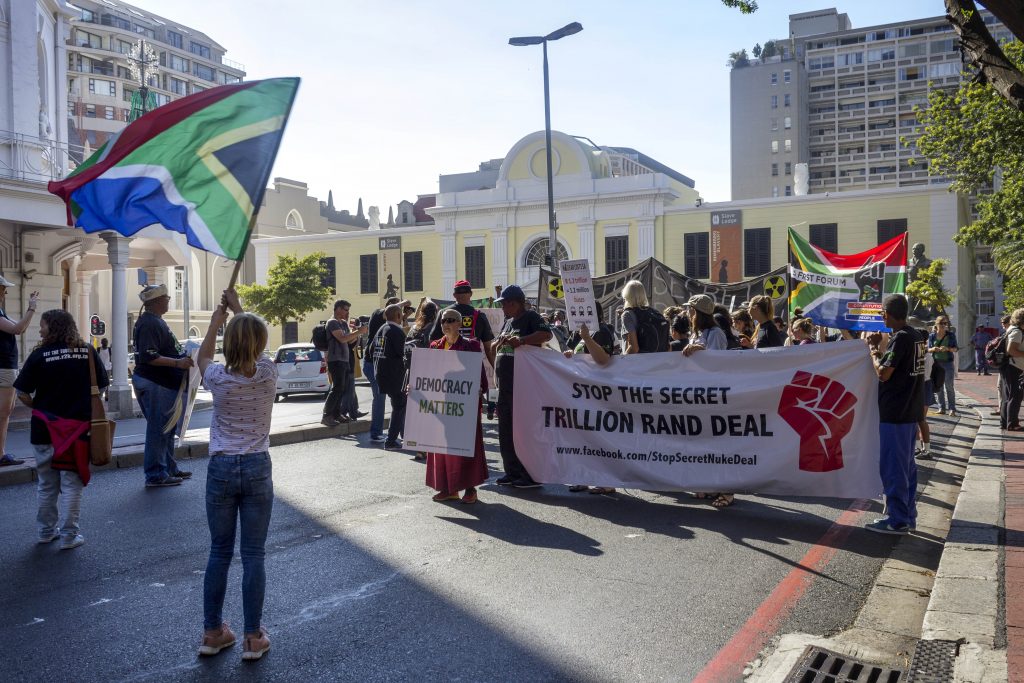 After months of delays and a postponement of our nuclear court case, we had our day in court on the 22nd February. Whilst judgement has been reserved and we wait for the outcome, these weeks and months have brought us another, very positive, outcome: civil society and people of faith are beginning to mobilise with us. A public campaign #StopSecretTrillionRandDeals has been launched, together with Right2Know, Justice & Peace, the Green Anglicans, AIDC, Million Climate Jobs, Popular Education and many other individuals and organisations. For this is only the first leg in the journey towards #EnergyJusticeForAll and we need to keep holding government to account to ensure a just energy future.

Here Liz McDaid shares a synopsis of the events of the last months as well as what took place in the Cape High Court:

At our first court hearing which took place on 13th December 2016, civil society gathered in support outside the Cape High Court, as well as in Durban and Johannesburg.

At the court hearing, the respondents’ counsel announced that the Minister of Energy had (in concurrence with the National Energy Regulator (NERSA)) made a new determination under s34 of the Electricity Regulation Act (ERA) for 9.6GW of nuclear energy, this time designating Eskom as the procurer of the nuclear power plants. (The 2013 s34 determination, which the SAFCEI & Earthlife Africa Jhb court case was challenging, had designated the Department of Energy as the procuring agent and Eskom as the purchaser of the electricity.)

This was viewed as an attempt to derail the litigation and render it moot. However, after argument in court and a meeting in judges’ chambers, a draft order was agreed which allowed Eskom to join in the court case if it wanted to, and which put in place expedited time frames in which all parties had to supplement their papers.

The matter was postponed to 22 – 24 February 2017. The order also included a punitive costs order against the Department of Energy relating to the wasted costs arising from the adjournment.

In the build up to the next court hearing of the 22nd February, civil society organisations embarked on a number of mobilisation actions to alert the public around the nuclear deal.

On Thursday, 9 February 2017, before the State of the Nation Address, the #StopSecretTrillionRandDeals campaign occupied bridges in Cape Town, Pretoria and Johannesburg to highlight to government that the people of South Africa are against the nuclear deal.

“We are picketing against the R1 Trillion Nuclear Deal that the government is said to have signed with Russia. The nuclear deal which has been shrouded in secrecy from the very start will cost the country dearly.  As citizens, we are concerned about the legitimacy of the procurement process since most decisions have been made behind closed doors.” Stop Secret Trillion Rand Deals campaign.

On 22nd-24th February 2017, our legal team finally got to lay out our arguments in front of the panel of two judges.

In supporting the court case, civil society organisations with the Stop Secret Trillion Rand Deals campaign at the core, organised a march from the gates of parliament to the steps of the Western Cape High Court.  This march symbolised that civil society has not received a hearing in parliament and has now approached the courts seeking justice.

There has been a long history of a few activists opposing nuclear energy in this country but as government continues with this R1trillion secret deal, more and more people are becoming aware and standing up to voice their opposition. We thank those organisations and individuals who have given tirelessly to mobilise and organise against this nuclear deal.

We call on all South Africans and people of faith to join us in continuing opposition to the nuclear deal, and we express our appreciation to all those across Southern Africa who have supported the court action whether in person, financially or in spirit.

Judgement has been reserved.  We will let you know once we know when the judgement will be delivered.

However, we need to continue to alert the public, and to explain to people how this deal will affect their lives, and encourage them to be part of standing up for South Africa, both current and future generations.

If we are successful, we need to mobilise people to raise their voices and speak out in the public participation spaces that this court action will create.

We also continue to need funds to cover both our legal costs, as well as continue our mobilisation work: https://www.givengain.com/cause/6357/campaigns/15676/

We want openness, transparency and accountability

Say NO to the Secret Trillion Rand Nuke Deal and join the Campaign!

Further reading – a sampling of press reports on the court case:

“While the government contends that this kind of international agreement is an instance of “executive action”, and thus beyond the purview of review, the applicants maintain that it is “a fairly straightforward case of administrative action” which should have gone before Parliament for resolution. While the Russian agreement was tabled in Parliament, it was not subject to a debate and a resolution of Parliament, despite the state law adviser’s counsel to Minister Joemat-Pettersson that this was required” https://www.dailymaverick.co.za/article/2017-02-22-nuclear-deal-case-to-stop-sa-from-bankrupting-itself-begins/#.WLXZHW997IU

“South Korean activist Kim Yong-Bock was outside court on Wednesday in solidarity with South African protesters – and bearing an urgent message focusing on nuclear safety. Kim said that the local court case was similar to the ongoing debate in Japan about the constitutionality of nuclear plants.”

“The security of life in your country is supposed to be protected by your Constitution,” Kim said, warning that after the 2011 Fukushima nuclear disaster in Japan, wrangling continues as to the liability of the Tokyo Electric Power Company. To the nuclear industry, Kim suggested, “it doesn’t really matter if you die or not”.

Looking around at the South Africans gathered outside the court, Kim said: “You are potential victims.” https://www.dailymaverick.co.za/article/2017-02-22-nuclear-deal-case-to-stop-sa-from-bankrupting-itself-begins/#.WLXZHW997IU

“A nuclear agreement with Russia has far-reaching consequences for the budget, the Western Cape High Court heard on Friday, as it places all liability for a nuclear accident on South Africa, while indemnifying Russia completely.

“So we have gone very far in seeming to court Russia and to say: ‘We will pay and we will indemnify’,” Unterhalter said.