Churches to pray for the Care of Creation on 1st September 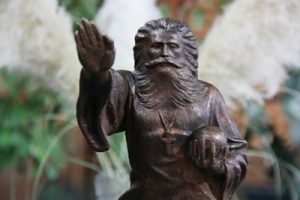 The Power of Prayer, a sculpture commissioned by the Georgian Orthodox Church in 1985, symbolizes God’s love and care for the whole creation. Ecumenical Centre, Geneva. © WCC/ Nikos Kosmidis

Joined in prayer, Christian churches around the world will again observe the ecumenical “Time for Creation” (1 September to 4 October), this year bolstered by Pope Francis’s recent proclamation of 1 September as the “World Day of Prayer for the Care of Creation.”

The movement toward a yearly commemoration of the biblical mandate to exercise stewardship over God’s creation (Genesis 1:26-28) first took shape following a 1 September 1989 encyclical from the late Ecumenical Patriarch Dimitrios I of Constantinople in which he extended an invitation to “the entire Christian world to offer together with the Mother Church of Christ, the Ecumenical Patriarchate, every year on this date prayers and supplications to the Maker of all, both as thanksgiving for the great gift of creation and as petitions for its protection and salvation.”

The pastoral letter from Dimitrios continued, “At the same time we paternally urge, on the one hand, the faithful in the world to admonish themselves and their children to respect and protect the natural environment and, on the other hand, those who are entrusted with the responsibility of governing the nations to act without delay, taking all necessary measures for the protection and preservation of natural creation.”

The World Council of Churches (WCC) and related ecumenical bodies have adopted a “Time for Creation” as an emphasis in the church year, running from the beginning of the Eastern Orthodox liturgical year on 1 September to the feast-day of Saint Francis of Assisi observed by the Roman Catholic Church on 4 October. This initiative arose directly from the Ecumenical Patriarch’s 1989 encyclical.

In 2008, the WCC Central Committee affirmed the invitation “to observe through prayers and action a special time for creation, its care and stewardship.”

“Pope Francis’s ecumenical initiative reinforces the growing emphasis on prayer for the care of creation among all the churches,” said Rev. Dr Olav Fykse Tveit, the WCC general secretary.

“We welcome the opportunity to join our efforts with those of the Ecumenical Patriarch and now the Catholic Church, and through prayer to sharpen our awareness and commitment to God’s creation, ‘our common home,’ as Pope Francis has called it,” Tveit added.

Declaring on 10 August the day of prayer and celebration, the pope said, “We live at a time when all Christians are faced with the same decisive challenges, to which we must respond together, in order to be more credible and effective,” he said. “It is my hope that this Day will in some way also involve other Churches and ecclesial Communities, and be celebrated in union with similar initiatives of the World Council of Churches.”

Focusing this year on the theme “pilgrimage for climate justice,” prayers and musical resources appropriate for a day for prayer for God’s creation are available online.

Among such materials are the one prepared by Eco-congregations Scotland, as well as by United Evangelical Mission, available on their website in several languages, including English. A multilingual brochure, “God’s Creation: A House of Life for All” has been published by the Evangelical Church in Central Germany in cooperation with churches from Slovakia, Sweden, Tanzania and the United States. Such resources can be found on the WCC website.

The materials aim to equip congregations, churches and parishes to pray in anticipation of the upcoming United Nations Climate Change Conference (COP 21) in Paris, December 2015.

Representatives of more than one hundred and ninety countries will meet in Paris to seek agreement on necessary measures to avoid damaging changes to the planet and its inhabitants, possibly including a 2°C rise in global temperatures.