The destructive force of mining

It was with great shock and sadness that we heard of the assassination of anti-mining activist and Wild Coast community leader Sikhosiphi “Bazooka” Rhadebe in March, as well as the attack on the City Press journalists at his funeral. It shows that the destruction mining companies can bring in their wake is not only environmental, but also social.

The fabric of the Wild Coast community has been slowly and insidiously destroyed, resulting in a tragedy like this. Whilst many assessments may be made before mining begins, from feasibility studies to environmental impact studies, not one of them looks at what social implications mining interests can have; what conflict and division it can bring to a community.

The Wild Coast sadly doesn’t stand as a single incident, there are countless other examples of corporate interests riding rough-shod over human life. In the same month, Manfredo Méndez Barrios, environmental activist and community leader in Gautemala, was shot to death. Berta Cáceres, a Honduran indigenous leader and environmental activist was killed only a month earlier, for her work in opposing a hydroelectric project. In Indonesia last year, Salim, an anti-mining activist was brutally killed and fellow activist Tosan, critically injured. And the list continues, activists the world over coming under threat for protecting the Earth and their families and communities from corporate plunder. 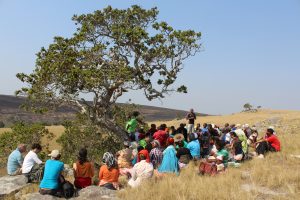 This drive to protect Creation, in the face of danger, is rooted in a deep connection to the land. The Amadiba community has been living off their land for generations and those opposing the mining know that the benefits that the Australian mining company, Mineral Resource Commodities (MRC), promises will be limited and short-lived. Instead they will be left with a destroyed eco-system that will no longer be able to sustain them or future generations.

Berta Cáceres also understood this, saying when she accepted the Goldman Prize for her leadership in a nonviolent campaign against a hydroelectric company to withdraw from the Agua Zarca dam: “Giving our lives in various ways for the protection of the rivers is giving our lives for the well-being of humanity and of this planet,”

“In our fight to protect the Gualcarque River, the most powerful element has been the Lenca people’s spirituality and an impressive tenacity in the struggle that continues to this day,” said Berta before her death.

We therefore pray that the Amadiba Crisis Committee, of which Bazooka Rhadebe was the Chairperson, will draw on their spirituality to give them strength in this time, and ask all Earth Keepers to keep them in your prayers and thoughts as well.

You can also support Sustaining the Wild Coast (SWC):

SAFCEI is a long-standing SWC partner