Re-enlivening our Relationships with Animals

St Francis of Assisi, born in Italy in the twelfth century, was a Catholic friar and preacher. In the Christian tradition he is known as the patron Saint of animals.

Prayer of Saint Francis for Animals
God Our Heavenly Father,
You created the world
to serve humanity’s needs
and to lead them to You.
By our own fault
we have lost the beautiful relationship
which we once had with all your creation.
Help us to see
that by restoring our relationship with You
we will also restore it
with all Your creation.
Give us the grace
to see all animals as gifts from You
and to treat them with respect
for they are Your creation.

We pray for all animals
who are suffering as a result of our neglect.
May the order You originally established
be once again restored to the whole world
through the intercession of the Glorious Virgin Mary,
the prayers of Saint Francis
and the merits of Your Son,
Our Lord Jesus Christ
Who lives and reigns with You
now and forever. Amen.

There are many stories about St Francis of Assisi’s interactions with animals. The most well-known ones are about him preaching to the birds and the occasion he made peace between a wolf and the town it was frightening. St Francis considered animals as his brothers and sisters and said this of them: “Not to hurt our humble brethren is our first duty to them, but to stop there is not enough. We have a higher mission — to be of service to them wherever they require it.” This is a wholly different way at looking at our place within creation, as it subverts the common viewpoint that animals were placed on this earth to be of service to us.

But it is not only St Francis that considered all creatures big and small to deserve the same compassion as people. The Prophet Mohammed was also known to show consideration and kindness towards animals, saying: “A good deed done to an animal is like a good deed done to a human being, while an act of cruelty to an animal is as bad as cruelty to a human being.”

All religions, in actual fact, have some baseline of respect and compassion towards animals. Notably in Buddhism which believes in extending loving kindness to all beings on earth equally and does not believe in the killing of animals in any form because of their basic principle of Ahimsa, a Sanskrit term meaning to do no harm or no violence.

Showing awareness of and kindness to all creatures is also the theme of the coming weeks. Green Deen week, which will run from Monday 31st August to Sunday 6th September, will be focusing on the practice of sacrificial slaughter in Islam, the Qurbani, which happens during the Festival of the Sacrifice, Eid-ul-Adha. Their callout, named the #TheQurbaniConnection, calls on all Muslims to re-engage with this practice in a meaningful way.

One Web of Life (OWL) is convening an evening of reflection and conversation on how we as humans relate to and treat our fellow beings on 30th September.  A background briefing on factory farming of animals in South Africa will be followed by a discussion introduced by a multi-faith panel of religious leaders.  The event, titled Animals and Humans: Faith Perspectives, will be held on the 30th September at 19h30 in Erin Hall, 8-10 Erin Road, Rondebosch, Cape Town.

OWL, a programme initiated in October 2014 by SAFCEI, envisions a world in which humankind, as part of the Earth’s community of life, is in benign and compassionate relationship with all other beings.  Its primary objectives are firstly to challenge people of faith to consider how their religious belief systems guide them in their relationships with, and treatment of, animals; and secondly to encourage and support people of faith to live in benign and compassionate relations with other living beings. 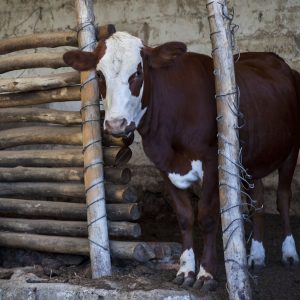 The month of October brings World Day for Farmed Animals on the second and World Animal Day on the fourth – the day that is celebrated as St Francis Feast Day in many parishes. Coinciding with these two days, Animals Matter to Africa is organising a march for the 3rd of October in Cape Town, Durban, East London, Barberton, Johannesburg, Landybrand, Middelburg, Mossel Bay, Sedgefield, Soweto, Worcester and in Harare. Animals Matter to Africa is a long-term project which aims to improve the awareness, policy, and practice of animal welfare across the continent and through these marches hopes to spread the message.

If there is no event near you, you can consider organising your own, like the St Mark’s Presbyterian Church in Waverley, Tshwane has done. They will be holding a “Pet’s Parade” on the 3rd October for the children and youth in Die Moot. A specialist in pet care will be giving a brief talk about the choice of pets and responsibilities that go with these choices and there will be an opportunity for children to show their pets and share their stories. The parade will conclude with a special prayer of blessing for all the animals who have participated in the parade with their young owners.

We urge you all to engage with these days and events and dedicate your prayers to animals in the next weeks. Share your stories with us and other faith communities by emailing louisa@safcei.org.za