Sinegugu speaks at a community gathering

Sinegugu Zukulu’s story of the Amadiba community’s struggle in Pondoland to keep the proposed N2 toll road and titanium mining off their land is an inspiring account. Sinegugu, who manages the protection of the extensive Mzimvubu mountain catchment area for Conservation SA, came to talk at SAFCEI’s AGM in Durban on the 3rd of June. He spoke about the ongoing struggle to keep both an Australian mining company, Mineral Resources Commodities (MRC), as well as SANRAL off their ancestral lands.

Located in the North-East corner of the Eastern Cape, the Pondoland Wild Coast is a pristine and beautiful stretch of coast where the AmaMpondo people have lived for generations. The community is deeply rooted in the land, which is rich in endemic plant and animal life, species that are found nowhere else in the world. The coastal dunes, which are enriched with heavy minerals, have drawn the unwanted attention of MRC. Through the local subsidiary Transworld Energy Minerals (TEM), MRC is, for a second time, seeking permission to mine titanium. Their conditional mining licence from the first application was revoked due to a lack of consultation with the local residents. The community is once again less than happy with the new application. “Pack your bags and go, we are not interested,” MRC was told when their second application was announced at a community meeting. In spite of opposition, MRC has not taken its first defeat to heart and the battle for the dunes continues. 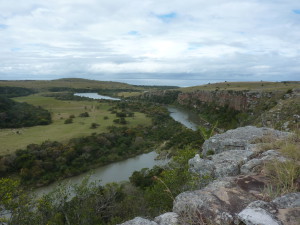 Mzamba River view towards the estuary

If mining were to take place much of the biodiversity of the area would be threatened or destroyed, and families will be displaced from lands that have sustained them for generations. Whilst jobs have been promised, these will be limited and short-lived. Mining would despoil the land, use up and foul the water and wreck the estuaries, destroying the long term job-creation potential of eco-tourism.

The community members believe that they will be left with the environmental consequences of the imposed developments with no improved circumstances. This is a fear well-founded as was shown when some of the Amadiba community visited their counterparts in Richards Bay, where mining has already taken place. The homes of residents and their surroundings have been detrimentally affected and water and air have been contaminated by the mining. No compensation has been paid so far.

As if mining is not enough to contend with the proposed N2 toll road presents another concern for the community. Whilst proponents sell it as an opportunity to bring infrastructure and development to people on the Wild Coast, the affected community know it will be another top-down SANRAL project where only contractors and interested parties reap the benefits. What the people need most are improved local roads, not a bypass and freeway designed for long distance trucking and high speed travellers. 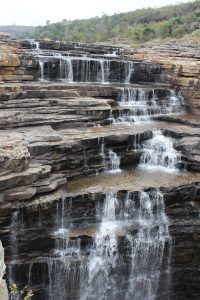 A waterfall along the Mzamba River

Thus the Amadiba community is now fighting on both fronts, because as Sinegugu further explains, “This toll road is like a cow that is being followed by a calf, and the calf that is following this toll road is probably mining.” So whilst proper roads are sorely needed in the region, the arrival of this infrastructure is a double-edged sword and not the solution they need. “We want roads in our community, but we don’t want toll roads…why toll the poorest region of the country. Why don’t they fix our roads? We need roads that take us into town [not the toll road],” says Sinegugu.

This battle for ancestral land and chosen way of life has led to deep divisions in the community. The film The Shore Break captures this heart-breaking reality where neighbour is pitted against neighbour, family member against family member. Those who want the mining and the toll road stand to benefit financially whilst the majority of the community know that long term damage to the land and community well-being will far outweigh any short term rewards from limited job creation. It is their resilience, in the face of powerful outside forces, that is so inspiring.

The people of Pondoland have made it clear that they don’t require politicians and foreign corporations to tell them what they need. They don’t want the disruption of mining or a toll road. They deeply value their established cultural traditions that are embedded in the land and envisage eco-tourism as a far more sustainable livelihood option. For further information, visit Sustaining the Wild Coast (SWC), an NGO that supports the community in its efforts to articulate and define its own development future. SAFCEI supports the work SWC does and invites all who are interested to do the same.