Celebrating the Season of Creation

The Season of Creation is upon us! Starting on the 1st September and ending with the St Francis Feast Day on the 4th October, it coincides symbolically with our spring here in the South.

The first of September has now gained even more significance with Pope Francis’ call to make the beginning of this month “World Day of Prayer for the Care of Creation.”

“As Christians we wish to offer our contribution towards overcoming the ecological crisis which humanity is living through,” Francis wrote in his letter addressed to Cardinal Peter Turkson and Cardinal Kurt Koch. The 1st of September, he said, would offer individuals and communities a time and space to “reaffirm their personal vocation to be stewards of creation, to thank God for the wonderful handiwork which he has entrusted to our care, and to implore his help for the protection of creation as well as his pardon for the sins committed against the world in which we live.”

Starting off the Season of Creation like this seems very apt and paves the way for a month in which our thoughts and prayers turn to the environment – the beautiful creation we have been entrusted with.

St Mark’s Presbyterian Church in Tshwane, South Africa, celebrated God’s creation earlier this year. Using “Season of Creation” and “Ryan the Rhino” among others as reference material, they celebrated with a multi-generational pilot project developed by Rev. Glynis Goyns for participation by the entire congregation from the youngest to the oldest in an integrated programme of environment and eco-justice activities. 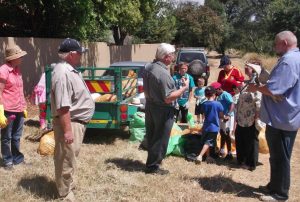 Multi-generational clean-up of space along stormwater channel in Die Moot.

A common theme was chosen for each week over a period of three months with appropriate Bible readings, hymns, prayers, activities and messages for three age groups of KingzKidz (the equivalent of Sunday School), as well as the liturgy and sermon for Sunday services. Thus all ages covered the same ground each week and several activities, such as cleaning up “green” space in the local community, engaged all age groups working interactively.

An appropriate “Kidz” hymn and message were included in the first few minutes of every Sunday service so that the adults were quite clear about the content and perspective being adopted in the children’s and teenager’s small groups. A team of six KingzKidz’ leaders had been specially trained in the explorative approach to the material, with the firm brief that this should not be a “teaching” exercise, but a mutual exploration of their relationships with God as creator and each other as an integral part of the overall community of life. 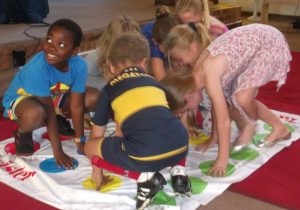 Multiple forms of communication were used in transmitting the message, including arts and crafts, music, drama, story-telling, science experiments and practical activities. This was based on the belief that each person is different and has a different way of learning, discovering and exploring. By way of example, a kinetic exercise was used to explore the inter-relatedness of all creation, with volunteers using rhythmic movements to plait different coloured strips of fabric into one intertwined strand, which was then used as a skipping rope to further explore the need to be in rhythm with the pulse of life.

The material is now being streamlined and more effectively collated for other faith communities to use and will be available on the SAFCEI website by the end of 2015.

There are a lot of other resources that are available already in the SAFCEI library to help you celebrate the Season of Creation. These resources have been prepared over the years by a dedicated group of people, overseen by Rev. Rachel Mash. The latest addition is a revised copy of the Season of Creation 2, which has an added section on animals.

There are many ways of celebrating however, and the North Rand Methodist Church invites everyone to join their Spiritual Spring campaign by making a personal pledge to do something positive for the environment.

We invite you all to make use of our online resources or develop your own and come back to us with stories of how you celebrated this special time. You can share your stories with louisa@safcei.org.za